In the single-board computer (SBC) space, there are loads of maker boards. These include the Odroid XU4, ASUS Tinker Board, UDOO x86, and Orange Pi Prime. However, the most popular SBC on the market remains the Raspberry Pi. With its various iterations, solid price to performance ratio, and fantastic community support, the Raspberry Pi is easily the top development board available. Since it's such a widely-adopted SBC, the Raspberry Pi features tons of projects ideas. Check out 10 best Raspberry Pi projects!

1. Retro Gaming on the Raspberry Pi

Because of its simplicity and functionality, retro gaming on the Raspberry Pi is an incredible idea. You can make this as easy or difficult as you please. For a basic set up, a Raspberry Pi arcade merely requires a Raspberry Pi board, case, power supply, and retro gaming software. Choosing a standalone gaming operating system (OS) such as RetroPie, Recalbox, or Lakka makes this as intuitive as mounting an OS to a microSD card. RetroPie, Recalbox, and Lakka each provide unique characteristics.

Snag an awesome Raspberry Pi case such as a Nintendo Entertainment System (NES) clone, or Super Nintendo Entertainment System (SNES) shell for a do-it-yourself (DIY) NES Mini or SNES Classic. Alternatively, you may build your own Raspberry Pi arcade cabinet or make a gorgeous enclosure such as a wooden Pi handheld games console with bullet buttons. Ultimately, it's easy to build a retro game console with a Raspberry Pi, though there's room for added complexity.

Additionally, you may create a Raspberry Pi smart home hub using various software options including Home Assistant. For security, try making the ultimate smart door lock security system with a Raspberry Pi, RFID keyfob, touchscreen, and more. With its abundant array of software, the Raspberry Pi is ideal as the foundation of a smart home project.

Smart home gadgets are increasingly popular. With widespread adoption for the likes of Chromecast and Google Home devices, these devices offer many features and integrations. Typically, the Google Home provides only touch and voice control, and Chromecast necessitates a smartphone for comprehensive control. Create a DIY remote control for Google Home and Chromecast. It's ridiculously simple to cobble together, requiring little more than the Pi and a bit of soldering.

6. Bitcoin Address Monitoring Tool Built With a Raspberry Pi and an LCD Display

The Raspberry Pi is useful for loads of projects. While you can build anything as simple as a Linux desktop or retro game console, the Pi is capable as a foundation for robotics projects. With a Raspberry Pi 3, GearMotor half encoder, RPi motor driver board, and BalanceRobot software, you can create your own Raspberry Pi robot. It's a fun venture that's less complicated that it might seem. 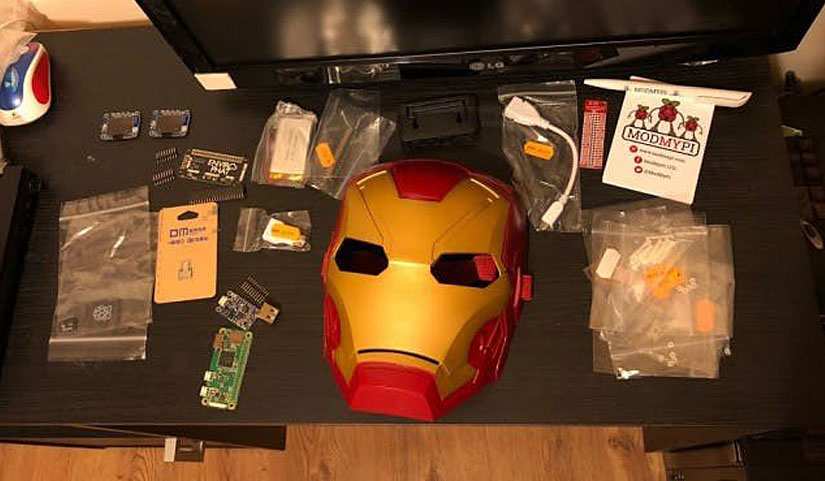 Marvel Studios created a juggernaut with its Marvel Cinematic Universe. It's one of my favorite film franchises, and though Captain America and Black Panther are likely my top MCU superheroes, this Pi-ron Man mask is pretty sweet. It calls for various hardware components, a bit of soldering, and a Raspberry Pi Zero W. Since the required computing power is pretty low, it's one of the best Raspberry Pi Zero projects you can build.

With this DIY Raspberry Pi Iron Man mask, you can create a mask with a heads up display (HUD) that's wearable and allows you to transform into Iron Man. It's a fun idea for cosplay and just geeking out. Maybe next someone can create a Raspberry Pi-based Dum Dum Dugan bowler hat or Blade's sword.

Magic mirror on the wall, who is the fairest one of all? Find out with a simple yet robust smart mirror complete with Amazon Alexa integration. It's a low-cost project with tons of functionality. You'll merely need a picture frame, mirrored window film, Raspberry Pi, and some assorted hardware. Then, you can add Alexa for increased smart home use.

Blockchain has many uses. It's useful for cryptocurrency, voting, and more. An atypical implementation of blockchain: a smart home automation system for managing kid's chores and allowance with blockchain. Moreover, this fantastic smart home system manages smart tech, real-time vehicle tracking, and more. It's ridiculously comprehensive. Again, the Raspberry Pi here is used for smart home control and automation.