Welcome to the Electromaker Show, episode 8! The week of July 27, 2020 saw a slew of neat news stories, projects, product releases, and more. Check out the latest highlights from the maker, tech, do-it-yourself (DIY), and embedded worlds!

Don't have time to watch the video or read the article? Listen to the podcast!

Computer student Mukesh Sankhla is a self-professed 3D design and printing buff, Arduino enthusiast, and programmer. Sankhla regularly makes awesome projects such as an RGB Hexmatrix IoT clock. And one of Mukesh's most recent creations is a weather simulating desk plant. It's powered by an ESP8266 NodeMCU v2 development board, features RGB LED light strips, and runs off of Arduino code. At the top, there are 3D printed clouds and a sun that are lit up with the LED light strips. The desk plant pulls in data from OpenWetherMap.org which it uses to display the local weather in real-time. For instance, if it's raining outside the color of the cloud changes and exhibits a thunderstorm effect. There are loads of different color combos for representing the weather. It's far more fun than watching a local news channel or checking websites and apps for a weather report.

Homebrewing is a pretty popular endeavor. From basic starter kits such as the Mr. Beer to semi-professional homebrew set ups, it's a cost-effective means of creating your own beer. And with a Raspberry Pi, you can smarten up your beer making. The BrewPi is an open-source temperature and fermentation controller with extreme precision that's powered by a Raspberry Pi. Some clever homebrewers have implemented Pi boards for automation, such as opening and closing propane tank valves, detecting if a burner lit up successfully, monitoring the wort temperature, and more. And some at-home beer makers have used Raspberry Pi-centric homebrew stations. And now homebrew software Aleproof from Arithmech (a software company that develops brewing apps) lets you monitor various metrics such as tracking changes in gravity, yeast cell counts, and other essential analytics. As Arithmech owner and founder Patrick Murphy elucidated, "We wanted a way to skip the paper and pencil and instead input the data directly into the software. Enter the Raspberry Pi!" It's a Python-based app that runs on top of Raspberry Pi OS and sits inside a homebrew shed. Since the shed is hot, humid, and generally an unfavorable environment for most electronics, it's the perfect use case for a Raspberry Pi. The Pi is resilient and durable when shoved into a case, portable, boasts a small footprint, and can be cooled easily using an add-on fan.

If you're like me, you still use physical media such as Blu-rays, DVDs, LaserDiscs, CDs, and vinyl records regularly. But if you've got spare CD ROM or DVD ROM drives and a Raspberry Pi Zero W, you can create a mini pen drawing machine. It's a great device that results in various drawings. But the process of sketching is equally as much fun to watch. The code is available on GitHub. for easily replicating the MIni Pen Plotter.

Need to teach your kids math? That's a new challenge many parents are facing as lots of schools are going completely remote because of COVID-19. And this Pavlovian math skills Arduino machine rewards children with sweets when they get math problems correct. It's more than just a witty invention, this is a true prototype.

My Pavlovian maths skills machine for my kids :-) from r/arduino

On the news front, artificial intelligence (AI) continues to thrive. With even many single-board computers such as the Nvidia Jetson Nano and Rock Pi 4C capable of AI applications, machine learning is a budding area. And reportedly, machines can learn unsupervised "at the speed of light," according to scientists. A team of researchers used light rather than electricity to perform computations, which exponentially increased both the efficiency and speed of machine learning neural networks. It's a major update in the artificial intelligence space. Hopefully nobody launches "Skynet.exe" anytime soon though.

In other AI news, DeepMind's latest artificial intelligence can program itself to make all the right decisions. Alphabet's DeepMind has developed deep learning algorithms that can tackle programming tasks historically spearheaded by the brightest of computer science minds. And DeepMind speculates that this could drastically advance the development of reinforcement learning algorithms.

"Stay a while and listen!" Diablo 2 proved revolutionary. Blizzard's classic dungeon crawling role-playing game (RPG) originally hit shelves in 2000, and since then saw the release of a patch that added new functionality, plus two sequels in Diablo III and Diablo IV. Moreover, D2 inspired tons of subsequent games, even spawning the RPG subgenre "Diablo-like," with titles such as Titan Quest, Grim Dawn, and Torchlight carrying on its legacy. Now, OpenDiablo2 brings the fun of Diablo II to the Raspberry Pi 4 and other devices! The cross-platform OpenDiablo2 is written in GoLang, therefore allowing for gameplay across tons of devices including the Raspberry Pi 4 and macOS laptops or desktops. While there's an official D2 installer for Mac, as of macOS Catalina, compatibility broke. While OpenDiablo2 is a game engine that supports Diablo 2, is ships sans any assets and requires a legally-purchased copy of Diablo II as well as the expansion Lord of Destruction.

The Raspberry Pi has a ton of uses, but by far one of the most popular and fun is retro gaming emulation. You can find loads of Raspberry Pi retro gaming cases in NES, SNES, Sega Master System, and Atari aesthetics. Plus, there are handheld portable retro gaming cases like the GPi from RetroFlag. The PiBoy DMG by experimental Pi offers a fresh solution for Raspberry Pi on-the-go gaming. Like the GBoyPi, the PiBoy DMG arrives in a GameBoy form factor. But unlike the GPi, the PiBoy DMG can fit a Raspberry Pi Zero, Zero W, Raspberry Pi 3 or 3 B+, and the Raspberry Pi 4. As such, you can run newer emulators for gaming with PlayStation Portable (PSP) and Nintendo 64 9N64) ROMs. It's got a 3.5-inch IPS display, built-in cooling fan, and the Raspberry Pi 4 model can handle full-speed Dreamcast emulation. It's a superb device that can handle high-end emulation all in a retro-looking, handheld form factor. You can find other handheld DIY emulation consoles such as the Odroid GO and Odroid GO Advance.

Although we often think of Linux as running on desktops, laptops, servers, and single-board computers (SBCs), plenty of alternative devices also run Linux. The Pine64 PinePhone is a handheld mobile device that's Linux-based. And the Community Edition: PostmarketOS with Convergence Package PinePhone boasts a beefier processor as well as a dock for connecting your PinePhone to a monitor, TV, or projector for use as a desktop. It ships with PostmarketOS, and is ready to use out-of-the-box with SMS messaging, LTE, GPS, and even GPU acceleration. The PinePhone is a great Android and iOS alternative and its video output capabilities make it a solid choice for productivity.

It's a Raspberry Pi Zero! It's an Arduino! No, it's the ATMegaZero! Fusing an ATmega32U4 with a Raspberry Pi Zero form factor, the ATMegaZero is an Arduino Leonardo-compatible board with a bevy of features baked in. Onboard, you'll find a microSD card slot, ESP8266 ESP-01 header for Wi-Fi and other applications, OLED display port, and tons of other features. Eddie Espinal makes this revolutionary microcontroller unit (MCU). The ATMegaZero pinout even mimics that of the Raspberry Pi. It's certainly an MCU worth keeping tabs on and picking up once it's available!

On the crowdfunding front, the EMIT by ControlBits is up on CrowdSupply. This environmental monitoring system for Internet of Things (IoT) devices is a dev board is open-source, compatible with ESP32 devices with its 30-pin DOIT DEVKIT, and remains low-cost as well as low-power. EMIT functions with the Arduino IDE, and is completely MicroPython compatible. There's MQTT integration, built-in temperature and humidity sensors, plus a bunch of other amenities.

You can buy some pretty solid headphones, from budget noise-canceling headphones to audiophile-caliber bank-breaking cans. But the LTA Headphones offer a modular, open-hardware framework for headphones. The LTA headphones boast user-replaceable components for customization, upgrades, and more. For instance, you can replace driver units with high-quality drivers, the ear pads are removable, you'll find acoustic treatment materials, mesh filters by SAATI, and a bunch of different parts and pieces that you can customize to your heart's content. Whether you're a DIYer, audiophile, or both, this is a sweet set of cans!

Robots are easily built at home, and you can even create some useful robotics. This indoor autonomous vehicle is an auto trash throwing robot that can roll up to a trash can and dump trash inside. Just click a button on your phone and the Trashbot 9000 (as I've now dubbed it) drives up to the trash can plops a load in automatically, then returns to its charging station. The Trash Terminator (as, like me, you could call it) is a pretty neat and forward-thinking autonomous vehicle for smart home automation.

These were the top maker, tech, and DIY stories we saw this month. From AI to Arduino and Raspberry projects, retro gaming consoles and robotics, crowdfunding updates, and other tech innovations. Did we miss anything? Let us know in the comments section with your favorite maker news updates! 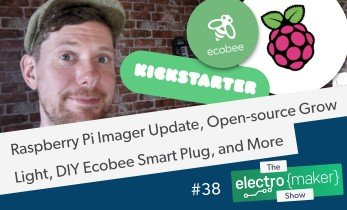