Single-board computers (SBCs) have tons of uses. But by far one of the easiest, and most popular, remains retro gaming emulation and home theatre PC (HTPC) use. One of my favorite Raspberry Pi competitors is the Pine64 RockPro64. It's an awesome Rockchip Rk3399 powered device. With up to 4GB of DDR4 RAM, the RockPro64 is a superb maker board that's perfect for retro gaming emulation. While you can run the likes of Lakka, Recalbox, and Batocera on the RockPro64 for gaming, the Android TV OS Slash TV provides a gorgeous multimedia experience that transforms the RockPro64 into an Android TV set-top box.

The Pine64 RockPro64 is a development board similar to the Raspberry Pi or ASUS Tinker Board. Powered by a Rockchip RK3399 system-on-a-chip (SoC), the RockPro64 is available with up to 4GB of LPDDR4 RAM. Its RK3399 SoC is mated with a Mali T860 MP4 GPU. There's gigabit ethernet, a microSD card slot as well as eMMC module for operating system installations. An HDMI output provides up to 4K video, and there's a USB-C port with video out as well.

What is Slash TV?

Slash TV is an Android TV OS available for maker board including the Raspberry Pi and RockPro64. It's pre-loaded with a smattering of retro gaming and HTPC apps for streaming media such as VLC media player, RetroArch, Mupen, Yaba Sanshiro, YouTube, Plex, and the Google Play Store. There are two different images, a 16 GB image and 32 GB image. While the images are different sizes, the only difference is the target eMMC or microSD card size. Since it's not auto-expanding, you'll need to pick the proper image for your device.

While there are other Android images for the RockPro64 including a RockPro64 Android 9.0 release, Slash TV is a fantastic pre-built image. It makes spinning up a do-it-yourself (DIY) Android TV box simple.

How to Install Slash TV on the RockPro64

For a RockPro64 Android TV box with Slash TV, you'll need a couple different items. Namely, the RockPro64 itself, a compatible power supply, and case. For the case, pretty much any RockPro64 case should suffice, but I suggest the Roshambo Retro Gaming Case for its Super Famicom aesthetic. Then, you'll need a download of the Slash TV Android image for the RockPro64. Plus, peripherals like a keyboard, mouse, and game controller are necessary alongside an active internet connection.

What you'll need to build a RockPro64 Android TV box with Slash TV:

Total cost: $63+ USD. You can snag a 2GB RockPro64 for around $63, with the RockPro64 4GB variant clocking in around $80. If you're just gaming, the 2GB unit should be fine. But if you plan to use your RockPro64 for a desktop as well, you should cop the 4GB board which will greatly benefit when multi-tasking.

Begin by heading over to TechToyTinker to download the RockPro64 Android TV OS image. You'll want to select the 16GB or 32GB image based on the size of your target device, an eMMC module or microSD card.

With your RockPro64 Android TV image downloaded, use a program such as Etcher to select the Slash TV installer, then your target boot device. When you're properly configured, go ahead and flash the IMG to your eMMC module or microSD card. When you're finished, pop it into the RockPro64 and power it on.

Hands-on with Slash TV on the RockPro64 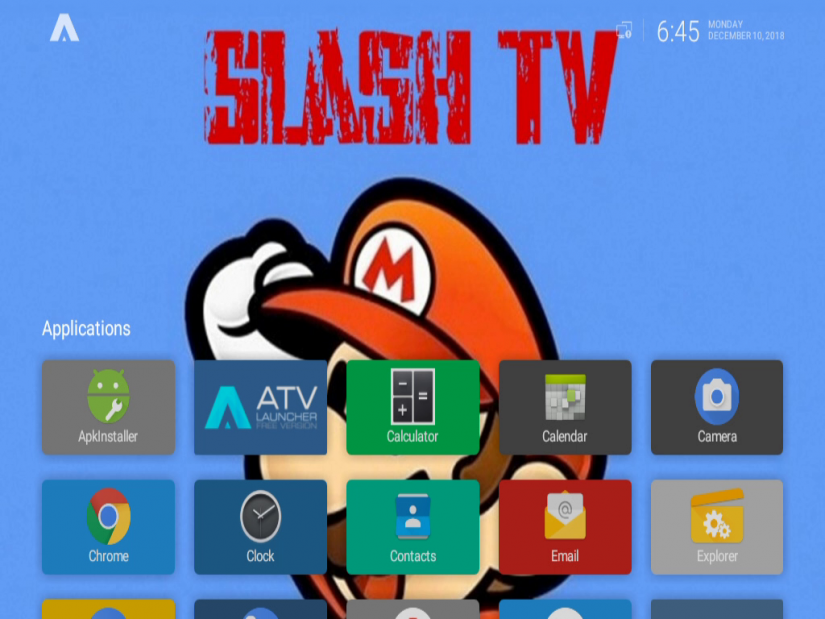 Upon first booting into Slash TV, you're greeted by a friendly Android interface with a Slash TV background sporting Mario. There's a library of pre-installed Android apps for retro gaming, multimedia use, and general maintenance. Plex and VLC come standard for streaming media as well as local file playback. On the gaming side, RetroArch, PPSSPP, John GBA Lite, Yaba Sanshiro, and Super Retro are loaded up. Plus, the Dig frontend, one of the best frontends for retro gaming on Android, is pre-loaded. ES File Explorer is another pre-installed software option, and you can access the Google Play Store. Since many Android projectors and streaming boxes from legitimate vendors lack Google Play access, it's a refreshing inclusion on a community-created Android TV operating system. 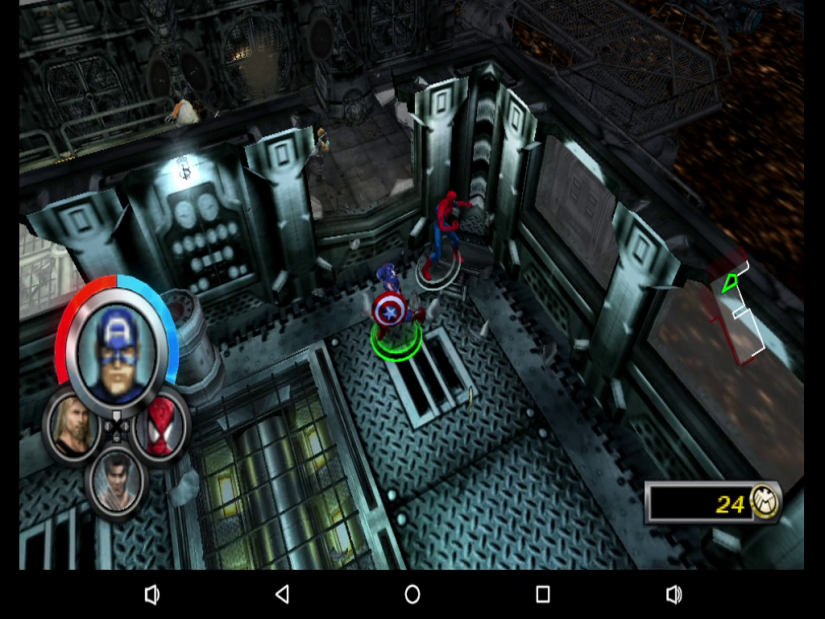 Because I have the Pine64 RockPro64 Bluetooth and Wi-Fi module installed, I was easily and quickly able to access the internet. This let me update apps, install new apps like Kodi, and browse the internet with an already-loaded Chrome app. General use is smooth. The Android TV interface looked great on my television screen, as pleasing as pre-built Android boxes such as the WeTek Play 2 and Mecool BB2 Pro. My peripherals such as a Rii mini keyboard and an Xbox 360 game controller functioned flawlessly. Streaming worked extremely well which is no surprise since most of that work is handled server-side rather than client-side. Likewise, playing 1080p and even 4K files from a connected harddrive didn't challenge the RockPro64 one bit. 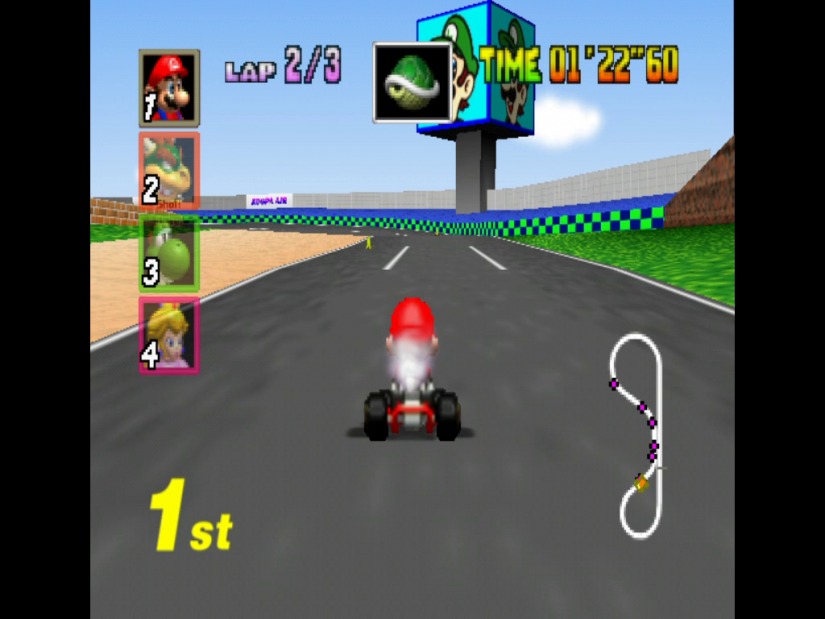 Gaming is where the RockPro64 really shines. PSP emulation, while not perfect, is shockingly solid as stock settings. I was able to run the notoriously-challenging God of War: Chains of Olympus with admittedly choppy audio and not the best framerates but playable nonetheless. Sure, it runs better on my PSP 3000 for obvious reasons, but it's nice to emulate as well. Similarly, Mario Kart N64 ran like a champ. I would have been hard-pressed to notice a difference between the emulated version running on my DIY RockPro64 Android TV box or my beloved Nintendo 64 cartridge.

Should You Use Slash TV for a RockPro64 Android TV Box?

Ultimately, Slash TV is a great option for making your own Android TV box. It's pre-loaded with tons of apps for a robust HTPC and retro gaming emulation experience. The Android TV UI rivals that of pre-built systems available to buy off-the-shelf. Impressively, Slash TV takes full advantage of the beefy hardware Pine64 specced out its RockPro64 board with. If you're looking for an awesome multimedia foundation, Slash TV on the RockPro64 simply rocks.