One of the most popular Linux operating systems (OSes) is Arch Linux. However, it's not necessarily the most user-friendly Linux distribution (distro). As such, many users prefer Manjaro Linux. Among the plethora of single-board computers (SBCs) on the market, the RockPro64 is one of the best options. It's a powerful maker board, and Manjaro Arm pairs well with the RockPro64. Learn how to install Manjaro on the RockPro64 for a capable Arch Linux-based desktop!

What is Manjaro Linux?

Manjaro Linux is an Arch Linux-based distro that focuses on ease of use. It's pretty well automated and thus caters to both new users and seasoned Linux buffs alike. The likes of Wine, Proton, and PlayOnLinux offer superb compatibility for Windows users switching to Linux. Its ARM variants come in pre-built images. For the RockPro64, Manjaro ARM is available with the KDE Plasma desktop environment, a minimal command line only release, and an XFCE iteration.

Which Version of Manjaro ARM Should You Use on the RockPro64?

If you're building a RockPro64 server or NAS to run headless, you might prefer running the minimal image. But for a desktop, you've got choices between XFCE and KDE Plasma. Since XFCE is a lightweight desktop environment based on GTK, there's low overhead. It's still super customizable. Plasma on the other hand is a lush, user-friendly desktop environment.

The RockPro64 hails from manufacturer Pine64. It's powered by a Rockchip Rk3399 system on a chip (SoC) paired with a Mali T860 MP4 GPU. There's up to 4GB of LPDDR4 RAM. You can run operating systems from microSD cards or eMMC modules. On the I/O (input/output) side, the RockPro64 boasts dual USB 2.0 headers, a USB 3.0 host, and USB-C with video output capabilities. Plus, there's a 40-pin GPIO header.

Onboard, there's a PI-2 bus, DSI (display serial interface) port, stereo MiPi-SCI port for cameras up to 12MPx. Plus, the RockPro64 features a real time clock (RTC) port, CMOS sensor interface, touch panel port, and headphone jack. While Bluetooth and Wi-Fi aren't build in, you can add them easily with a separate module.

How to Install Manjaro on the RockPro64

There's very little needed for a Manjaro ARM Linux desktop using a RockPro64 board. You'll need the RockPro64 itself, plus an optional but recommended case, power supply, microSD card or eMMC module, and peripherals like a keyboard and mouse. On the software side, a Manjaro Linux install demands your preferred RockPro64 Manjaro image, image mounting software such as Etcher, and an app like 7Zip if you need to decompress your image. And finally, an active Internet connection, either Ethernet or Wi-Fi. Overall, it's a fairly low budget project.

What you'll need to install Manjaro ARM on the RockPro64:

Total cost: $63+ USD. The base RockPro64 2GB model clocks in at $63, while its 4GB variant slides in around $80. I strongly suggest springing for the 4GB model as the additional RAM comes in quite handy for multitasking. Sure, the beefy Rockchip CPU and Mali GPU are perfect for video and gaming, but running multiple simultaneous applications, opening several internet tabs, and general desktop use greatly benefits from the added RAM.

With your preferred Manjaro ARM installer downloaded, use a program such as Etcher to mount it to a microSD card or eMMC module. Point image mounting software to the Manjaro installer as well as your boot medium, eMMC or microSD. Once everything's set up properly, go ahead and flash your Manjaro ARM image. This should be pretty quick, but you may want to go make a cup of coffee or tea, then come back in a few moments. After burning completes, pop your microSD card or eMMC module, and power on your RockPro64. 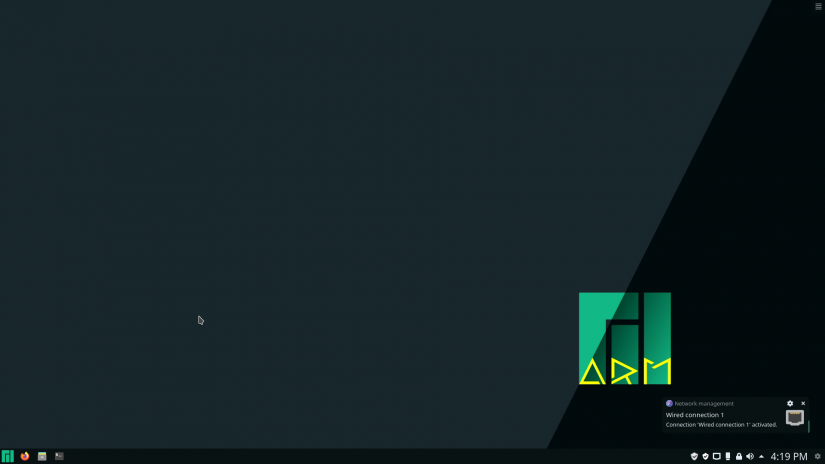 I'm incredibly impressed with Manjaro ARM. Having used its desktop and laptop variant, as well as a Raspberry Pi 4 Manjaro PC, I'm familiar with Manjaro's ecosystem. Yet that's exactly what I appreciate so much about Manjaro. While I've used Arch Linux, I'm at a point where I want a Linux distro that simply works well out-of-the-box. Manjaro balances cutting-edge functionality with ease-of-use that should satiate both newcomers and Linux buffs alike. Arch Linux lacks a graphical user interface (GUI) installer. Since Arch features a modular installation, with a base minimal image that's command-line only, you'll need to manually install a desktop environment, apps, and whatever else you'd like. 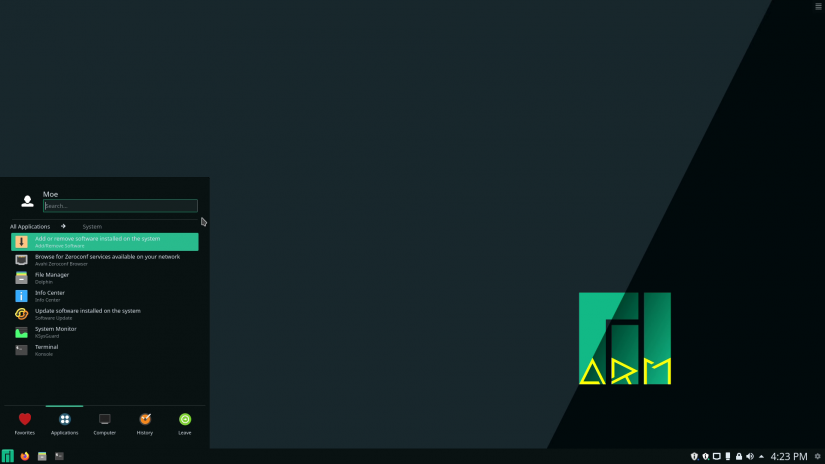 Manjaro, on the other hand, flaunts the benefits of Arch without the difficulty. You'll still find rolling releases, a slew of different user repositories including AUR and Pacman, plus a massive emphasis on user-friendliness which extends from installation to everyday use. Sure, I've tried hair-pullingly frustrating distros such as NuTyX and Gentoo which require compiling a kernel, and actually really appreciate the modular installation process of Armbian. But Manjaro provides the best of both worlds without the Borg assimilation: rolling updates, stability and security, user-friendliness, and several repos with an awesome software center.

Whereas many RockPro64 OSes come in one flavor, Manjaro boasts a selection of three different desktop environments. The GUI remains appealing, and it's got a solid package manager in Pacman, Yaourt, and Arch User Repositories. For those switching from macOS or Windows, Manjaro ARM is a great pick. That's because it offers the ability to really dig into the OS and Linux, or steer clear of the command line altogether. Plus, a pretty desktop environment, assuming you're not using the Minimal image, provides a familiar layout to the likes of Windows or Mac.

Furthermore, Manjaro ARM holds the distinction of being one of the more polished RockPro64 OS options. I appreciated being able to use Manjaro after connecting to Wi-Fi. There's little aside from that which is required. Default software is pretty minimal, though helpful. You'll find Firefox for a web browser, the full LibreOffice Suite, media players, and a smattering of other apps. I went ahead and installed GIMP as well.

Manjaro RockPro64 Review - Should You Use Manjaro ARM on the RockPro64?

If you've got a RockPro64 desktop or even NAS build planned, I'd definitely recommend Manjaro ARM. It's one of the easiest and most polished RockPro64 OSes. I'm a huge fan of its ease of use, and the plentiful options for software installations. For a great Arch Linux alternative, definitely check out Manjaro for ARM boards like the RockPro64. Coupled with its up to 4GB of DDR4 RAM, Manjaro ARM makes a fantastic Linux desktop when running on the RockPro64.

Your turn: Which Linux distros are you running?