Although I'm a massive Linux devotee, I still use Windows regularly on my gaming desktop and laptop. While Linux gaming has made tons of advancements, it's still somewhat behind Windows. For instance, without my Windows PCs, I'd have been unable to play virtual reality tour de force Half-Life: Alyx. Growing up, Windows XP was one of my favorite operating systems. Aesthetically, it was beautiful, and on Windows 7, I frequently utilized Windows XP Mode for running older software. And with Raspbian XP Professional, you can relive the glory of Windows XP through a lovely Linux distribution (distro) for the Raspberry Pi! Learn all about Raspbian XP, from what it is to how to install it, and if you should use Raspbian XP!

What is Raspbian XP Professional?

From a cursory glance at its desktop environment, you'd be hardpressed to differentiate Raspbian XP Professional from Windows XP. However, this Raspberry Pi 4 compatible OS, despite its appearance, is a Raspbian Linux-based distro. It's skinned to look like a spitting image of Windows XP, complete with the blue taskbar, green start menu icon, and default Bliss background with its blue sky daubed with clouds, and rolling green hills below.

Yet, Raspbian XP is much more than merely a Linux distro engineered to emulate the aesthetic of Windows XP on the Raspberry Pi 4. Instead, this Raspberry Pi OS packs in a slew of software that enables you to run various non-native Linux games and applications. The Box86 Raspberry Pi emulator comes built-in, an excellent Linux gaming emulator for running x86s games or programs. Plus, you'll find retro gaming emulators like Redream for Sega Dreamcast emulation, and PPSSPP for playing PlayStation Portable (PSP) ROMs baked in. Further, Chromium Media Edition arrives pre-installed with digital rights management (DRM) for streaming from various sources such as Netflix on the Raspberry Pi. Raspbian XP hails from Pi Labs, and if you're more nostalgic for Windows 95, there's Raspbian 95 as well.

How to Install Raspbian XP on the Raspberry Pi 4

For a Windows XP experience on the Raspberry Pi 4, you'll need a Raspberry Pi 4 board. Especially if you wish to utilize your Raspberry Pi as a desktop, I'd recommend snagging the 4GB RAM model, as the additional memory will drastically benefit multi-tasking such as running multiple programs simultaneously or opening several web browser tabs. You'll need a microSD card to install Rasbian XP on, as well as peripherals such as a keyboard and mouse. A case is optional though highly recommended. And you'll need an HDMI-enabled display such as a monitor, TV, or projector as well as a micro HDMI to HDMI cable for connecting your Pi to your display. To power the Raspberry Pi, you have to use a compatible USB-C power supply unit (PSU).

Aside from hardware, you'll need an active Internet connection, either ethernet or Wi-Fi. An image mounting program such as Etcher will be necessary, plus an image extraction app is required to unzip the decompressed image.

Total cost: $35+ USD. You can cop a Raspberry Pi 4 2GB RAM variant for around $35. For improved multi-tasking, I highly suggest snagging the 4GB Raspberry Pi 4 board which will drastically enhance your desktop experience running multiple apps and programs simultaneously. Depending on what you've got lying around, you might only need to pick up a Raspberry Pi board. If you need a Raspberry Pi, case, and power supply, buying a complete Raspberry Pi kit is your best bet.

Once you're ready to burn either the 7z file or unzipped Raspbian XP image to a microSD, fire up your image burning program, like Etcher. Point it to your Raspbian XP image and your desired boot medium, in this case a microSD card. When everything's properly configured, hit flash. Wait for image burning to finish up and when it's complete, pop your microSD into your Raspberry Pi and power it on. 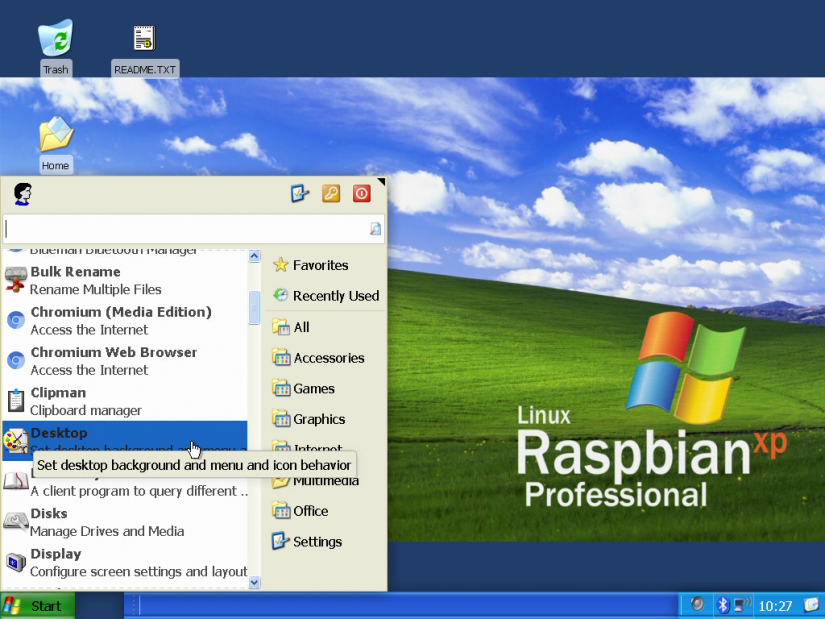 Initially booting into Raspbian XP Professional, I was astounded at how closely this Debian Linux-based distro captured the experience of running Win XP on a Raspberry Pi 4. Detailed splash screens emulate the boot screens found on genuine Windows XP operating systems, and the desktop graphical user interface (GUI) is a spitting image of Windows XP. There's the blue taskbar, green Start menu icon, Bliss desktop background, and even the same style of desktop, application, and folder icons. General usability is superb. Raspbian XP is simple enough. You can use all pre-installed applications out-of-the-box, and getting connected to Wi-Fi is as easy as selecting the network icon, choosing your wireless network, and entering a password. 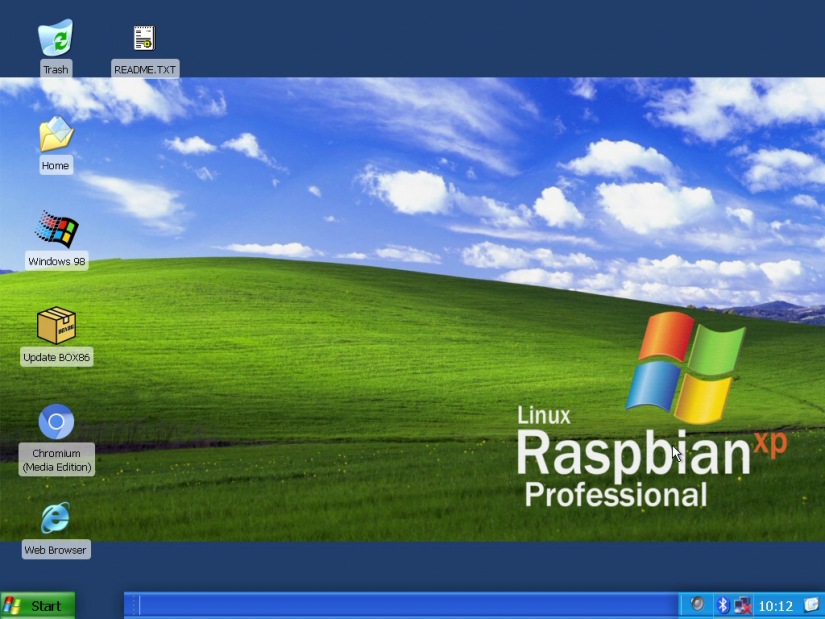 Whereas some Linux OSes go the minimalist route, Raspbian XP on the Pi instead includes a bunch of pre-installed software. Yet none of it is bloatware. Rather, I found most apps useful. There's the LibreOffice suite for office productivity, various multimedia programs such as VLC, and emulators like Mupen64 for Nintendo 64 gameplay, PPSSPP for running PSP ROMs, and a Dreamcast emulator in Redream. It's Box86 and DOSbox where Raspbian XP truly excels. By bundling software to help you run many Windows-only programs on a Raspberry Pi, it very closely mimics running Windows XP on a Raspberry Pi. You'll be able to install a bunch of older video games and apps, such as Broken Sword, Medal of Honor: Allied Assault, and Doom. 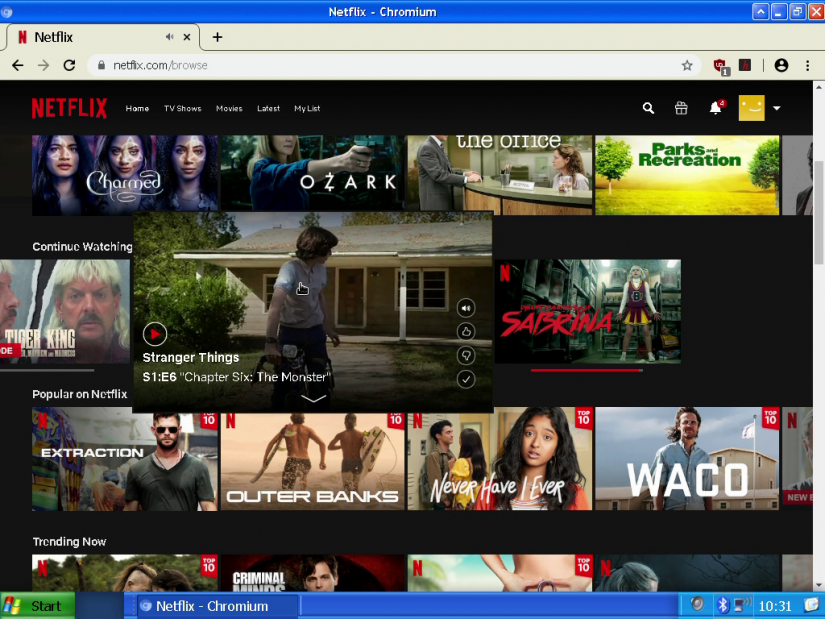 The experience of using Raspbian XP is a total treat. Particularly retro-minded Raspberry Pi users, it's a fun, functional Linux distro, and a well-crafted vanilla Raspbian alternative. I enjoy the aesthetic, but moreover, the slew of useful pre-installed software. Sure, it's a nostalgic romp, but the delight of using Raspbian XP derives from its functionality.

Build a Win XP Clone on a Raspberry Pi 4 - Should You Use Raspbian XP? 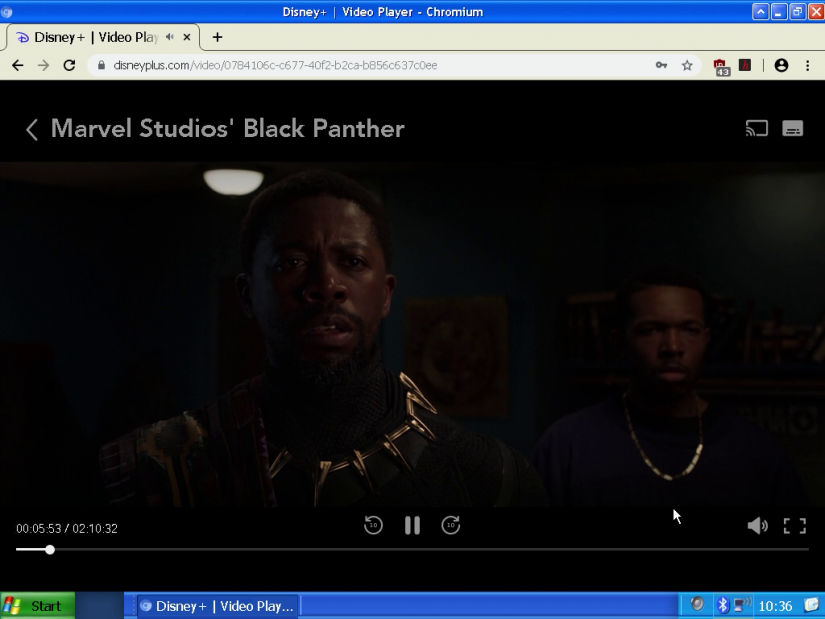 Raspbian XP is best for a desktop Linux operating system. At that, it's an extraordinary OS. While Raspbian XP from Pi Labs isn't necessarily anything you can't build yourself, it's extremely well designed. However, its roster of pre-installed programs can save you the time of downloading and setting up various apps on your own. I appreciate the mix of different programs, from office productivity tools to retro gaming emulators. Since the Raspberry Pi, with its revamped system-on-a-chip and up to 4GB of RAM, performs extremely well as a basic desktop PC, it's refreshing to see Linux distros like Raspbian XP taking full advantage of the Pi for that purpose. With its old school vibes and plethora of pre-installed apps, Raspbian XP may be me my new daily driver distro on the Raspberry Pi 4.

Your turn: What Raspberry Pi OSes do you recommend?