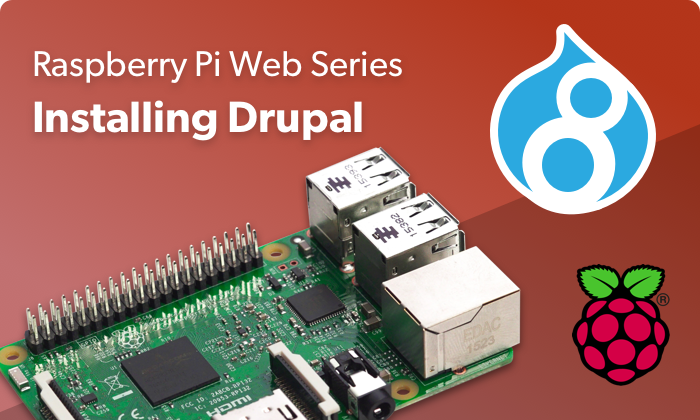 Drupal on Raspberry Pi: What is Drupal?

Drupal is a free and open-source content management system (CMS). It's written in PHP and available freely and legally under the GNU General Public License. Because of its open-source nature, hefty feature set, and lots of community support, Drupal is a popular content management framework. It's touted as both highly-scalable and flexible. Like WordPress, Drupal boasts tons of resources including themes, forums, and more. Notably, Drupal features excellent security features, with sites such as WhiteHouse.gov using Drupal.

Drupal Pi is an easy means to add Drupal to the Raspberry Pi for a web server. As its GitHub page explains, this is a derivative of the Raspberry Pi Dramble project which provides the functionality to make a Drupal cluster installation on Raspberry Pi devices. This, however, is intended for a solitary Raspberry Pi running Drupal.

First, you'll need Raspbian running on your Raspberry Pi board. A Raspberry Pi 2, 3, or 3 B+ is recommended. With a Raspberry Pi running Raspbian or Raspbian Lite, you'll first need to install both Ansible and Git. To do so, run:

You can check if Ansible installed correctly with:

Then, copy the example.config.yml to config.yml and its example.inventory to inventory. After that, install Ansible roles:

Wait a few minutes, then open http://www.drupalpi.test/ which should yield the appropriate test page.

While Drupal Pi is an easy way to run Drupal on a Raspberry Pi board, you may install it via the command line standalone. In a terminal, run:

You'll be prompted to configure the database. Select yes and continue. Now, choose the database type. Next, select a MySQL application password. In a command line, enter:

Then, restart the web server with:

In a web browser, navigate to [your IP address]/drupal7/install.php

From here, pick an installation profile. You can opt for minimal or standard. Click save and continue. Pick a language, then continue. Now, you'll need to wait for some basic installation to complete.

After that finishes, configure your site. You'll need to enter a site name and email address, as well as username, site maintenance email address, password, as well as enter server settings. This includes picking a default country, time zone, and choosing your update notifications settings. When you finish, click save and continue. Now, you'll have a link to visit your website.

More powerful hardware is definitely preferred. For instance, I won't be switching my personal website over to a self-hosted site on a Raspberry Pi. But for something basic, or to learn about web servers, installing Drupal on the Raspberry Pi offers a fun, simple project idea. Opting for a cluster set up provides greater Drupal performance on a Raspberry Pi.

What servers are you running on your Raspberry Pi?