With its quad-core ARM Cortex A-53 1.4GHz CPU paired with a Mali-450 GPU featuring OpenGL ES and OpenVG support, the Libre Computer Renegade is a surprisingly powerful device. Packed into its credit card-sized form factor, there's 4K video output support with the ability to decode VP9 P2, H.265, and H.264 videos at 4K60. Plus, it can encode H.265 and H.264 files at 1080p. Outfitted with up to 4GB of DDR4 RAM, the ROC-RK3328-CC Renegade is more than capable at multi-tasking for desktop use. And with its dual USB 2.0 and solitary USB 3.0 headers, there's great connectivity. For internet connectivity, you'll find Gigabit Ethernet as well.

What is Armbian and Why Should You Use it?

Debian Linux-based Armbian is, as its name suggests, an ARM Linux distribution (distro). It's a minimal Linux distro and by default includes a lightweight XFCE-based desktop environment available. Since it's Debian-based, you can easily install pretty much any Linux application you can imagine, from server programs like Plex and Emby to media players such as Kodi, and everything in between. Because Armbian is lightweight and the base installation eschews a GUI, Armbian makes a great server environment. However, the available desktop environment makes Armbian a solid option for both desktop and server use alike.

What is Armbian: A lightweight Linux for ARM distro

First up head over to the official Armbian website. Navigate to the downloads page, where you can pick from the Armbian Bionic or Armbian Buster distros. For desktop and multimedia PCs, opt for Armbian Bionic. If you're building a server or lightweight desktop, choose Buster.

With your flashed image properly mounted on a microSD card, pop it into your Libre Computer and power it on. 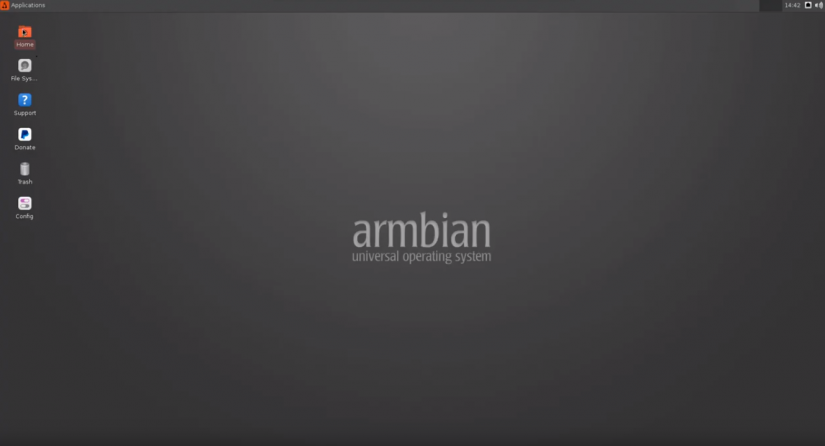 Where Armbian really shines on the Libre Computer Renegade is its lightweight nature and ease of use. With a small base installation size, Armbian provides a snappy experience. At first boot, you'll need to enter the default Armbian username and password. Those are:

Next, enter a username. Then, you'll be asked to enter a full name and given the option to select various options such as a room user, plus enter phone numbers. When you're finished, press Y if you're satisfied, or N to re-enter any information.

Utilizing the Libre Computer ROC-RK3328-CC, Armbian was able to handle multiple tabs open at a time and even some streaming media from the likes of YouTube and Plex. The base installer is a mere 3GB and change, pretty tiny and space-saving.

Should You Use Armbian on the Libre Computer Renegade?

I'm definitely a fan of Armbian for the Libre Computer Renegade. Regardless of hardware competency, without polished usable software, it's pointless. Thankfully, Armbian absolutely rocks. It's incredibly lightweight and won't bog down the capable yet modestly spececd out ROC-RK3328-CC Renegade. And it's suitable for a host of different projects, from a media or web server to a desktop, game console, or Internet of Things (IoT) project. Armbian is a great operating system for the Libre Computer Renegade with excellent compatibility and a simple software installation process.

What single-board computers are you using, and what OSes do you prefer on SBCs?