Arduino microcontrollers are incredibly popular electronics devices. While programming an Arduino device is possible with the standard Arduino IDE (integrated development environment) on Linux, macOS, or Windows, it's also possible to use Android phones and tablets. Controlling an Adruino with an Android app requires a bit of fiddling, but results in an excellent mobile development environment. Check out the best Android Arduino IDEs for programming an Arduino board with an Android app!

Can You Control an Arduino with Android?

The Arduino IDE is a cross-platform compatible program for writing, uploading, and executing Arduino code. In turn, this code controls various hardware connectors hooked up to your Arduino microcontroller to accomplish various tasks such as blinking LEDs or powering servo motors. Although there's no official Android Arduino IDE, there are a few ways to use an Arduino Android Bluetooth connection or USB for getting Android to communicate with your Arduino.

For programming an Adruino with Android, there are a few different methods. You'll need an Android 4.0 or later device, an Arduino board, and USB OTG cable plus USB-A to USB-B cable for a wired connection. On top of that, you'll need an Arduino IDE Android app. A USB OTG, or On-the-Go cable allows for reading data from a USB device straight from an Android device. So for controlling Arduino boards with Android phones or tablets, you'll run a USB OTG cable from your Android handset, then connect the Arduino's USB cable to that. USB OTG is required so that your Android device may transfer data to and from the Arduino microcontroller.

Why You Should Use an Arduino IDE for Android

You can easily run an Android IDE on Linux, macOS, and Windows PCs. There are even Chromebook-compatible Arduino IDEs such as the Arduino Create Chrome app and CrhomeDuino. And with the portability of most modern laptops and Chromebooks, it's simple enough to tote around a PC capable of programming your Arduino board on the go. However, mobile phones and tablets are even more convenient for throwing in a bag or even pocket. 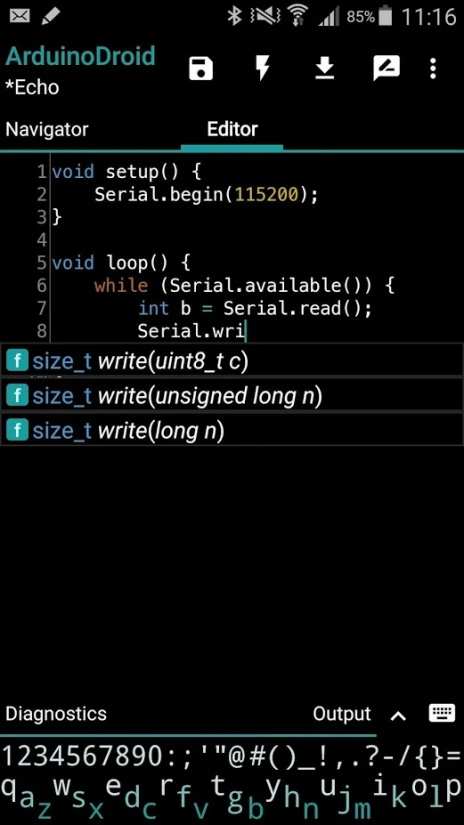 For a great app to control an Arduino microcontroller with an Android, the aptly-named ArduinoDroid is a great pick. A small application, ArduinoDroid only takes up a mere 210 MB. But despite its small-footprint, this full-featured Arduino IDE boasts a development environment, compiler, and uploader. Using ArduinoDroid, you can open and edit Arduino sketches, use the sketch navigator, and compile or upload sketches. There's a built-in keyboard, code syntax highlighting for reading code easier, and real-time diagnostics which helps when troubleshooting errors. Arduino microcontroller compatibility is superb with support for the Arduino UNO and UNO R3, Nano, Leonardo, Micro and Pro Micro, Duemilanove, and a slew of others. USB OTG support is required for use. 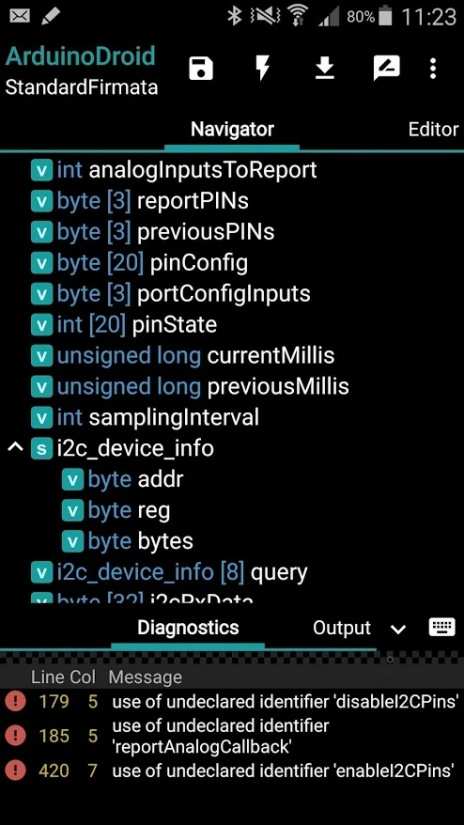 You'll also find Dropbox and Google Drive integration for storing Arduino code in the cloud which grants access on any device. It's a pretty solid application with excellent support for a variety of different Arduino microcontrollers. Active development means that bugs are constantly being ironed out. Overall, if you're looking for a way to write, compile, and upload Arduino code using your Android phone or tablet, ArduinoDroid is a must-download.

Another Arduino IDE for Android is Arduino Commander. It's a pretty neat Arduino Bluetooth controller. There is USB support for several boards including ATMega-based Arduino microcontrollers such as the Arduino UNO and Arduino Mega, as well as FTDI-based boards like the Duemilanove. If you're using its USB mode, no special sketches are required. Uniquely, Arduino Commander lets you control your Arduino using Ethernet if you've got the Ethernet shield, or wirelessly with Bluetooth. A user-friendly WYSIWYG interface makes Arduino programming on Android a breeze. 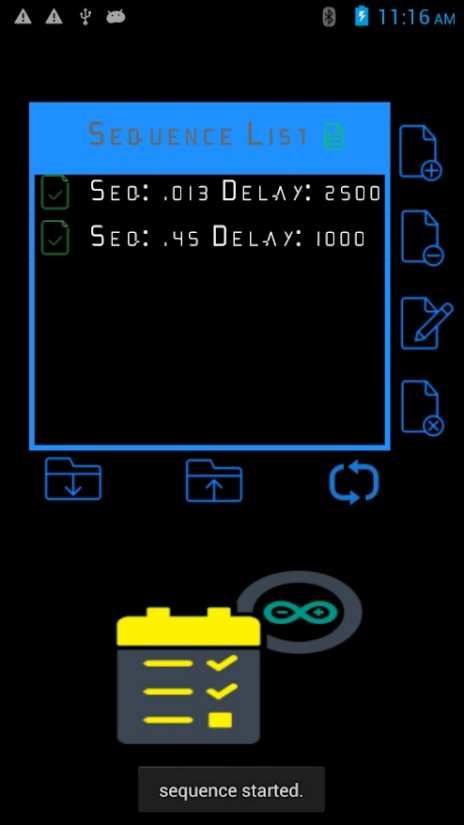 The Bluino Loader Android app Arduino IDE is a neat option for programming Arduino boards with phones and tablets. WIth 4 stars on over 2,500 reviews, it's a stable, functional IDE. You can upload sketches using USB OTG or Bluetooth. There's a serial monitor for debugging, and .hex file upload capabilities. Using Bluino, you can upload sketches to the Arduino Uno, Nano, Mega2560, Pro Mini, and Duemilanove. Various example libraries and sketches come built-in, there's syntax highlighting, and you can open or edit Arduino sketches. With a robust feature set, Bluino is a superb portable Arduino IDE for beginners, intermediate, and advanced users alike. 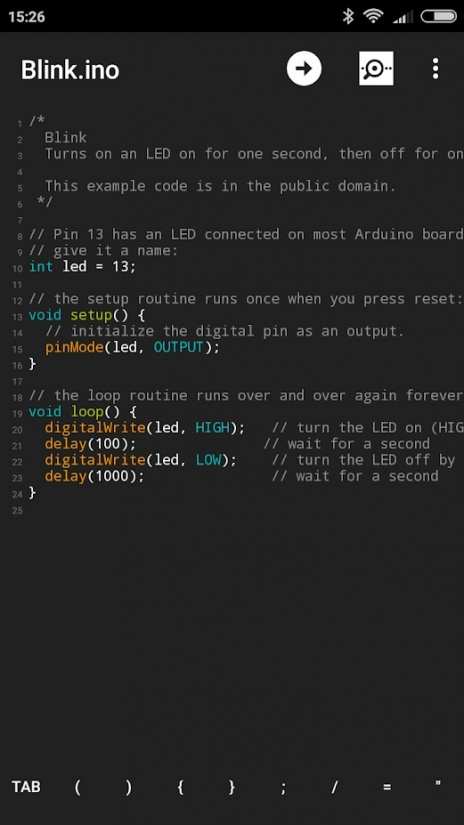 Although programming for an Arduino on an Android device isn't as straightforward as it is with a traditional PC-based IDE, it's still totally doable. So long as you've got the proper hardware set up, either USB OTG for a hardwired connection or Bluetooth, plus a compatible Arduino microcontroller, and an Arduino IDE app for Android, you're all set. Many Andriod-based Arduino IDEs are beginner-friendly and offer Arduino sketch support. ArduinoDroid is one of the best-known options, but Arduino Commander is a spectacular option that's extremely user-friendly and touts wireless compatibility. You might also consider Bluino Loader, a polished Android Arduino app.

Your turn: Which Android apps are you using to program for Arduino boards?