The Importance of Transistors - Amplifiers 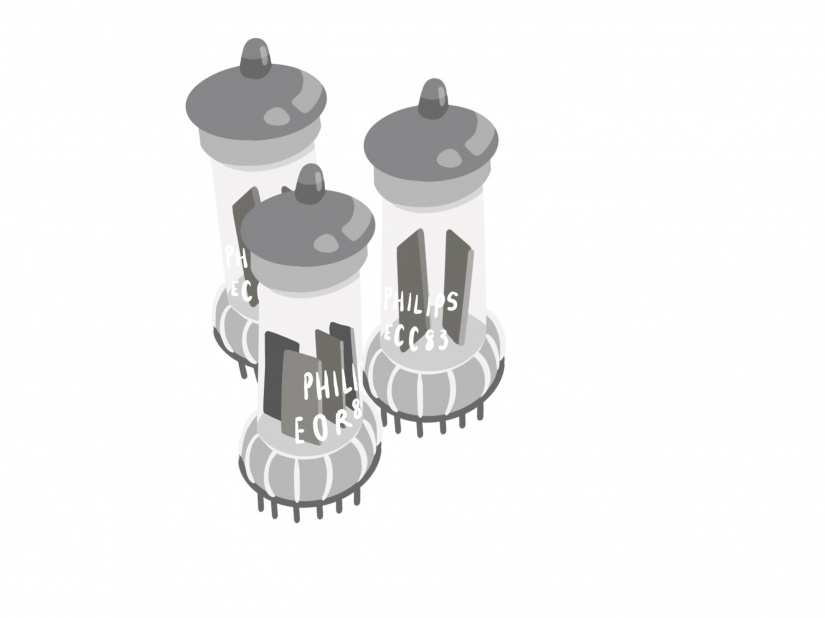 You've probably heard about transistors, but what does a transistor do? The importance of transistors stems from their ability to amplify a signal whereby a tiny input signal is converted into a much larger signal. This is important because many components in electronics only produce tiny weak signals (such as microphones), which cannot be directly connected to a speaker. Therefore, these signals are passed into an amplifier, which in turn provides the power needed to drive a speaker. But speakers and microphones have existed for many decades before the transistor, and during this time the electronic valve was used instead. A valve is an amplifying device that looks like a light bulb, but instead has many input connections that can control the flow of current.

While valves allowed for the creation of radios and TVs, their large size and power consumption made them impractical for more advanced electrical systems. For example, electrical switching devices (such as valves and transistors), are an essential component to building a computer as they can process signals, which in turn can be used to perform computations. As a result, the first major computers were built using valve technology, but these would be massive in scale, frequently break, and consume far too much power. When the transistor came along, computers could suddenly be reduced in size, making them practical for everyday use.

What is a Transistor and How do Transistors Work?

How are Transistors Built?

Transistors are made using semiconductor materials such as silicon, but the physical construction depends on the transistor type. As stated previously, transistors fall mainly into one of two categories; BJTs and FETs. Other transistor types do exist (such as insulated gate bipolar junction transistors, or IGBJT), but these are not as common as either BJTs or FETs. 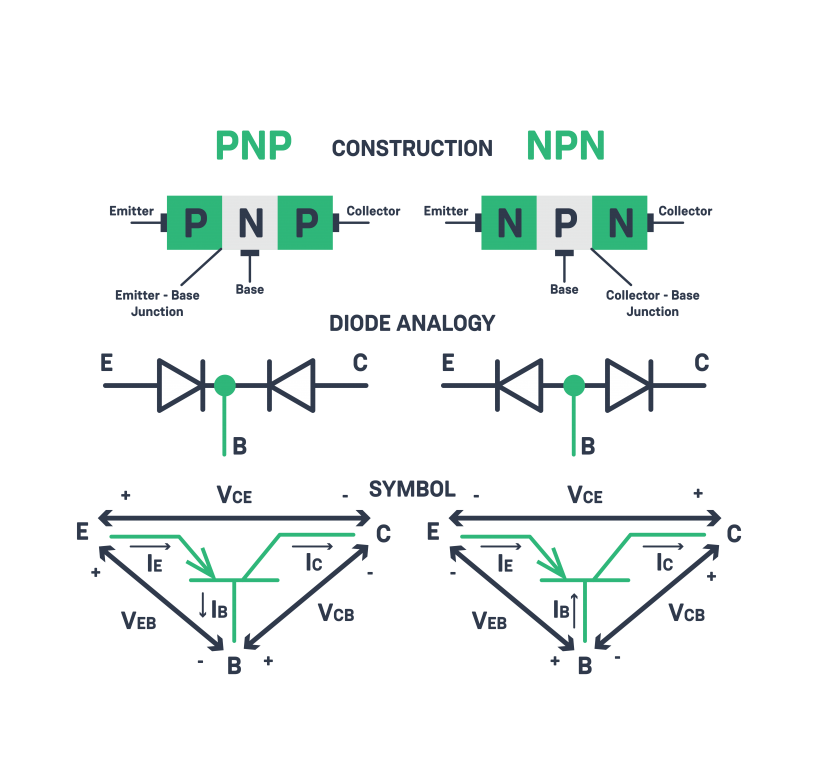 Field Effect Transistors - What is JFET? 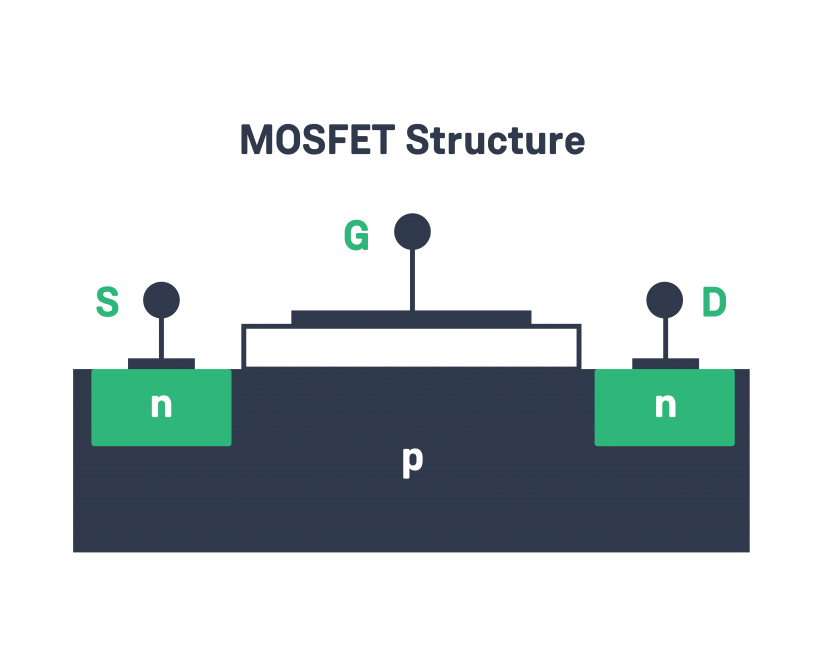 Field effect transistors also come in N and P varieties just like BJTs, but the term FET actually refers to a family of transistors. Junction Field Effect Transistors are an example of a FET, but these are not very common. Instead, we will focus on Metal-Oxide Semiconductor Field Effect Transistor, or MOSFETs, as these are the most widely used transistor to date. MOSFETs have a complex structure that starts of with a layer of semiconductor that has three semiconductor layers (just like BJTs, these are NPN or PNP). However, the three pins to a MOSFET are instead called the drain (the power input), the gate (the control input), and the source (the power output). The current through the MOSFET is controlled by the voltage between the gate and the source, where N type MOSFETs conduct current when this voltage is positive, and P type MOSFETs conduct current when this voltage is negative. Above the middle layer, a thin layer of metal-oxide is placed between the gate contact and the middle layer. An N-type MOSFET has N-type semiconductor for the source and drain, while a P-type has p-type semiconductor. [Read more - What is Current?] 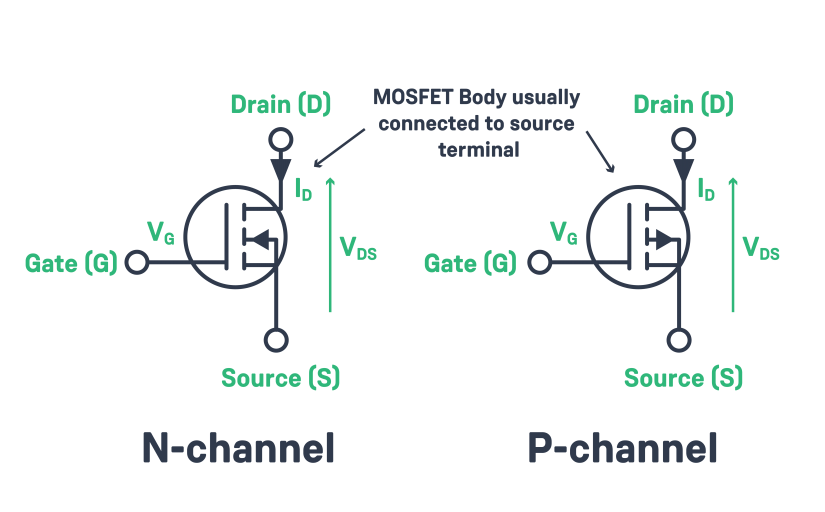 Which One for What - What are the Different Types of Transistors?

When choosing which transistor to use in a project you need to determine what signal type you are dealing with. Both transistor types, BJT and FET, can be used in any application, but each transistor does have specific advantages that will make one preferred over the other.

BJTs are current input devices, and as such will not be suitable for projects that have sensors with very weak current outputs. FETs, however, are voltage-controlled devices, and as such are ideal for such applications. BJTs, however, have significantly greater gains (i.e. amount of amplification), and as such are often found in power amplifiers. FETs, on the other hand, do not have as much gain, and as a result are often found in switching applications as opposed to analogy amplifiers. 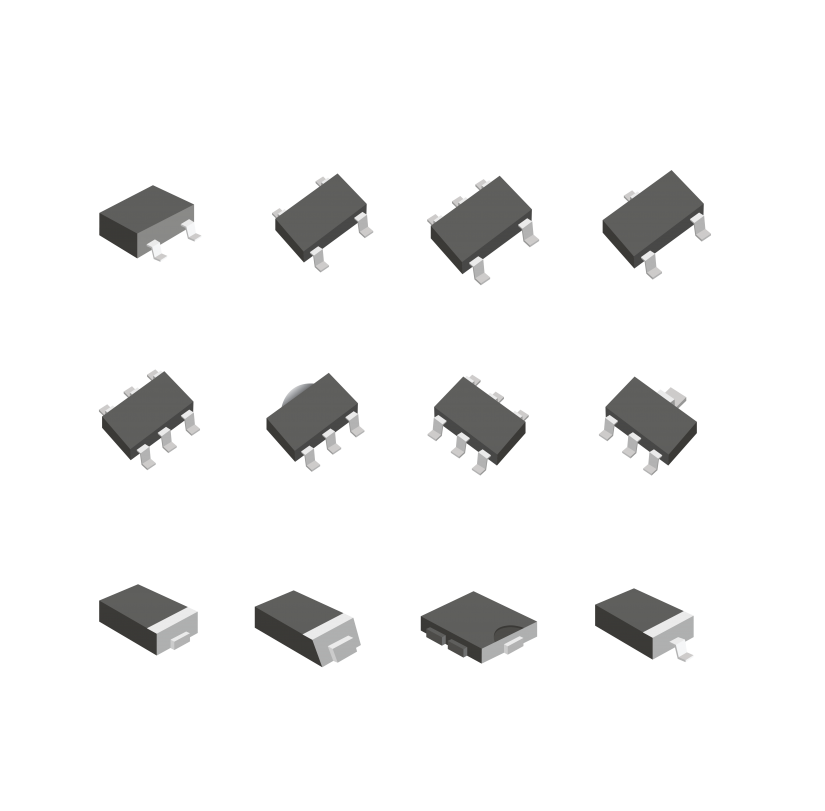 Transistors come in many shapes, sizes, and forms which is why it is impossible to show a picture of every transistor package. This problem is made worse when many other components, such as linear regulators, use the same packages as transistors making them harder to identify. However, in general, most transistors have three pins, but some can have 4 (these are particularly rare). Transistors come in both through-hole and surface mount parts, and are almost always black. [Read more - What is a Resistor] 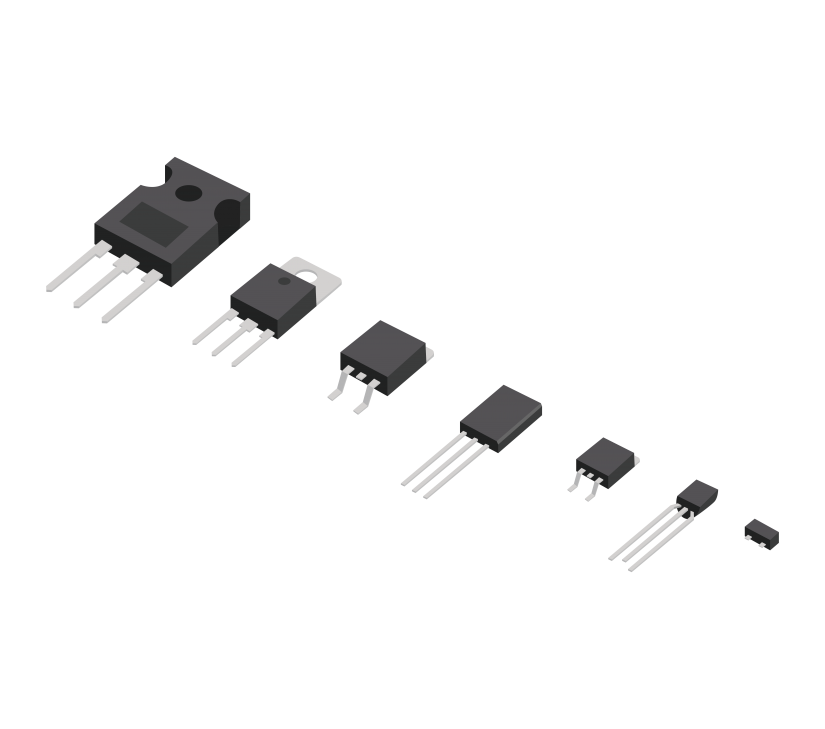 Learning about how transistors work is a big topic, and requires a bit of math. For example, there are equations that relate the input current to the output current of a BJT, as well as equations that relate the input gate voltage to the output current of a FET. Instead, we will look at some basic circuits that utilises BJTs and FETs that you can use in your own projects without the need for complex math.

NPN Switch - What is NPN? 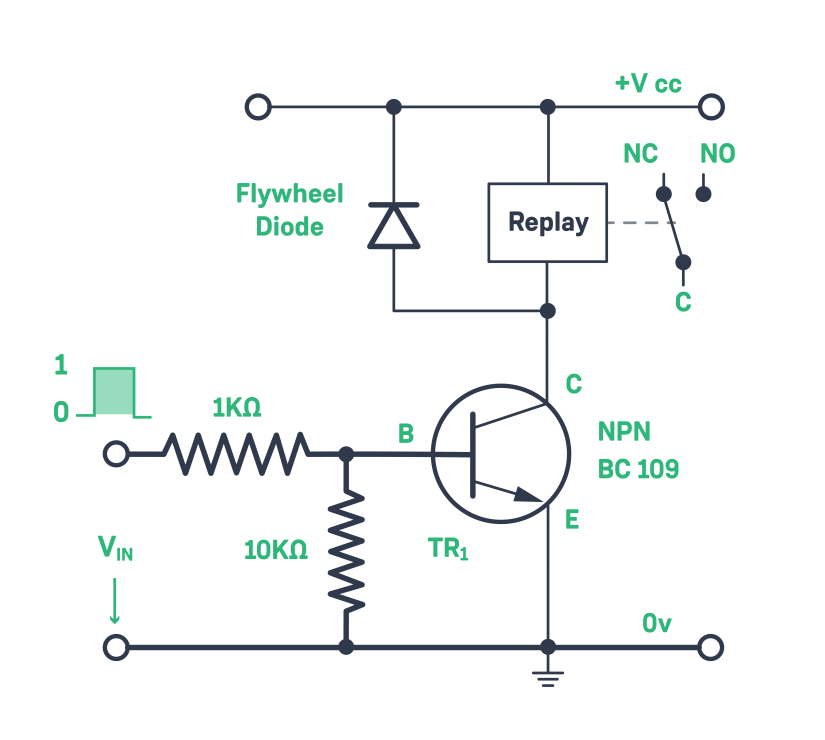 The NPN switch circuit is being used as an electronic switch instead of an amplifier. When an input current is put into the transistor, power flows through the transistor and into the relay thus turning it on. This circuit can be useful in applications where a small current (such as that from a photodiode), can be used to control a more powerful device. 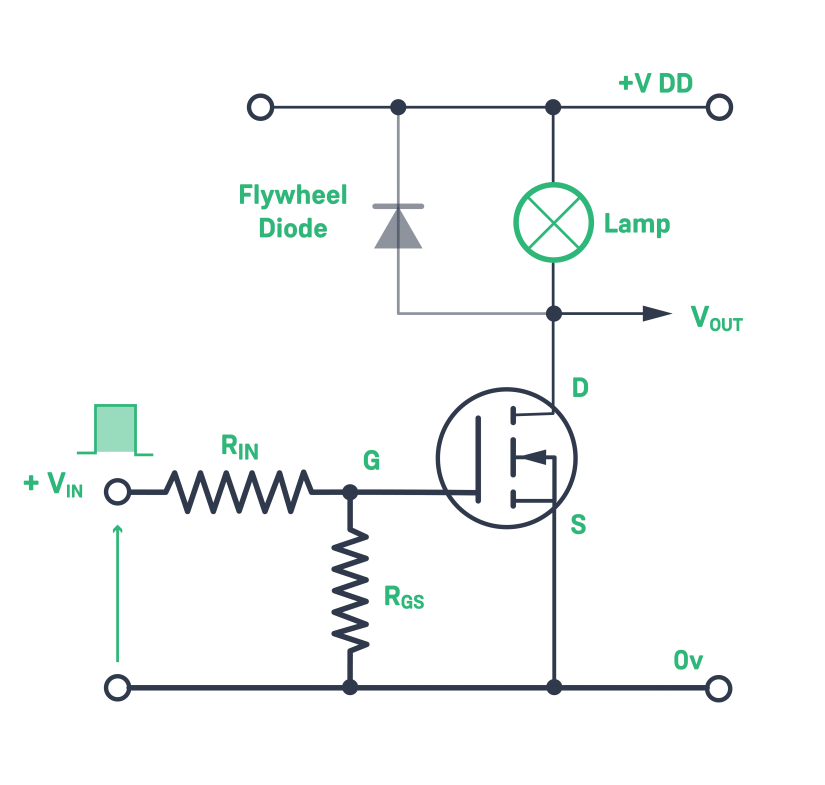 The NMOS switch is the same as the NPN switch, however instead of needing an input current, the circuit requires an input voltage. This circuit is very useful in applications where a sensor produces a voltage instead of a current (such as a microphone).

While a somewhat complex topic, it is important to understand how CMOS logic gates works, specifically the NOT, NAND, and NOR gates, as this demonstrates why transistors are so important. Logic gates are computational circuits that take in binary data, process that data, and produce an output.

The NOT gate takes a single bit in, and the flips it on the output. 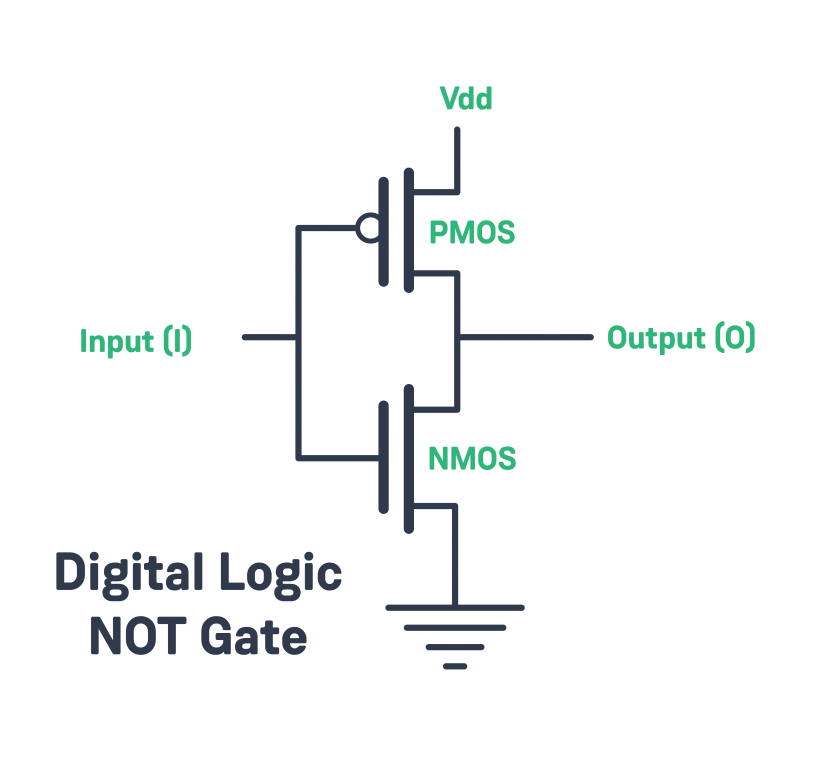 The NAND gate takes two bits, and produces an output that is only 0 when both inputs are 1. 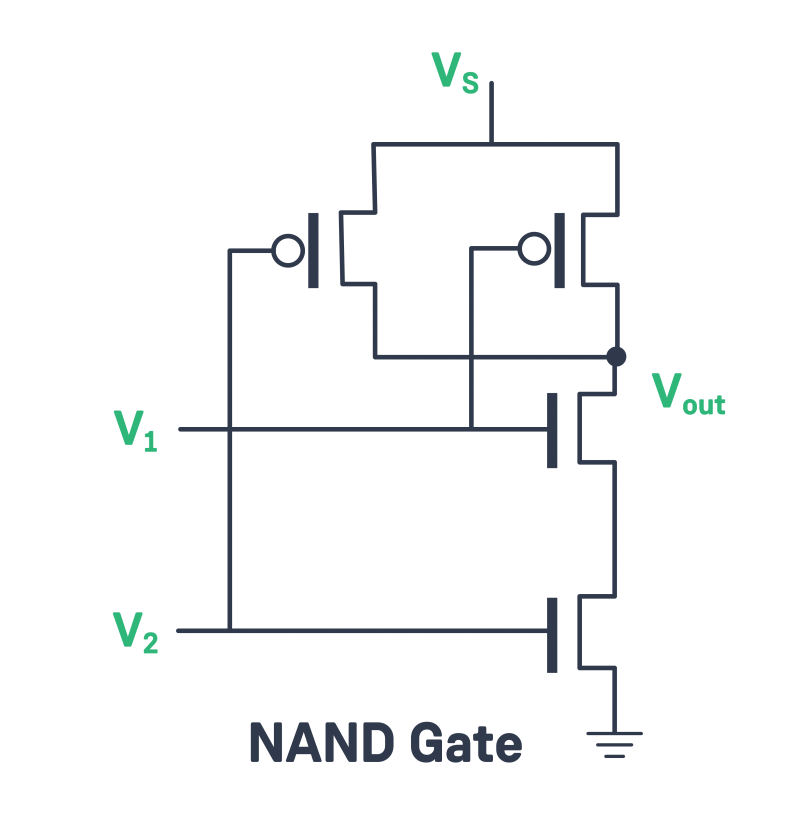 The NOR gate takes two bits, and produces an output that is only 1 when both inputs are 0. 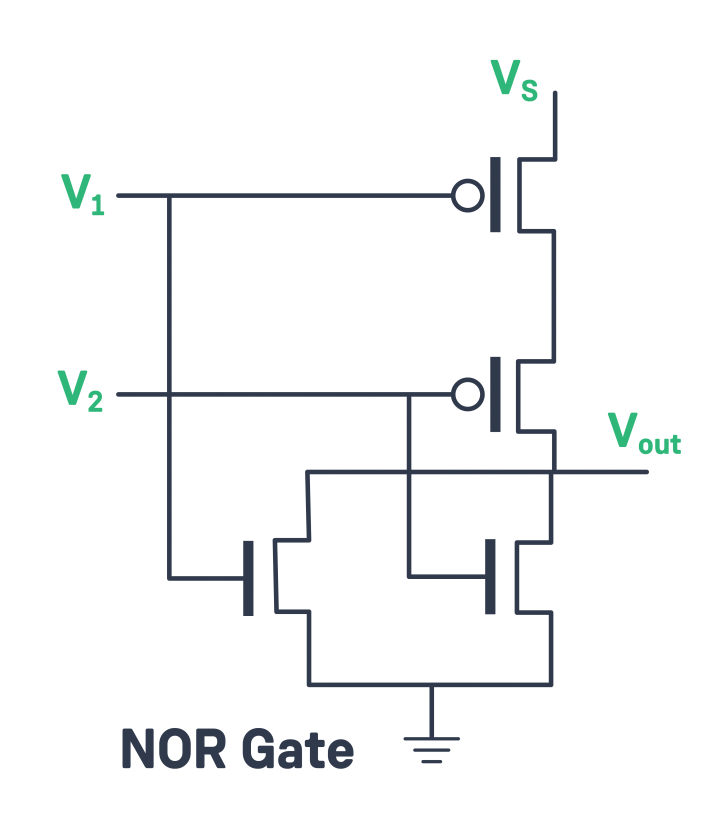 Depending on how logic gates are combined, they can be made to add, subtract, multiply, divide, and compare binary numbers. From there, sequential circuits can feed numbers in one by one to perform multiple operations. This is the basics to how computers work, and why transistors are so important. These devices can be miniaturised onto integrated circuits which can contains billions of transistors, which in turn can be used to power smartphones, computers, microwaves, ovens, cars, and just about any electronic device you can think of.

Transistor are three pin devices that can control the flow of current by using electricity. They are very important in amplification circuits which turn small signals into large ones. Transistors, when used as switches, can be used in logic circuits, which in turn form the basis of all computing technology. [Read more - What is Voltage]