Diodes come in many shapes, sizes, and functions, but one function that all diodes have in common is their ability to only allow electricity to flow in one direction. A diode, in plumbing terms, can be thought of as a one-way valve where water can enter the value in the input and exit through the output, but water trying to go into the output is blocked. Diodes are classified as passive components as they cannot be controlled by an external electrical signal. Other examples of passive components include resistors, capacitors, and inductors.

The History of Diodes - What is a Diode? 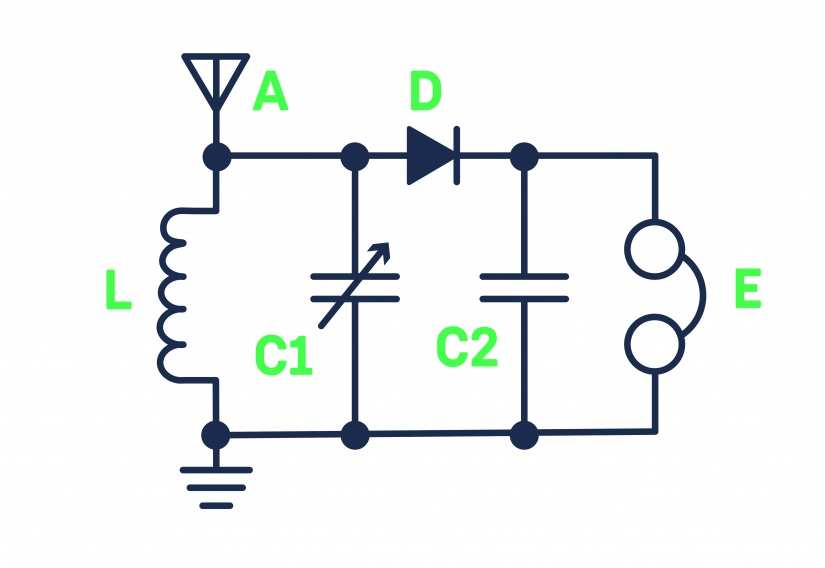 Modern methods for achieving this would be to use a local oscillator and subtractor that can isolate the carrier wave, but such methods were not available in the first radios. Instead, a cat-whisker would be used which would instead rectify the incoming radio wave. Once rectified, a capacitor is used to remove the high-frequency wave (as these pass-through capacitors easily), while the low-frequency audio wave would ignore the capacitor. This signal would then be amplified using a valve amplifier with the resultant amplified wave being sent to a speaker. 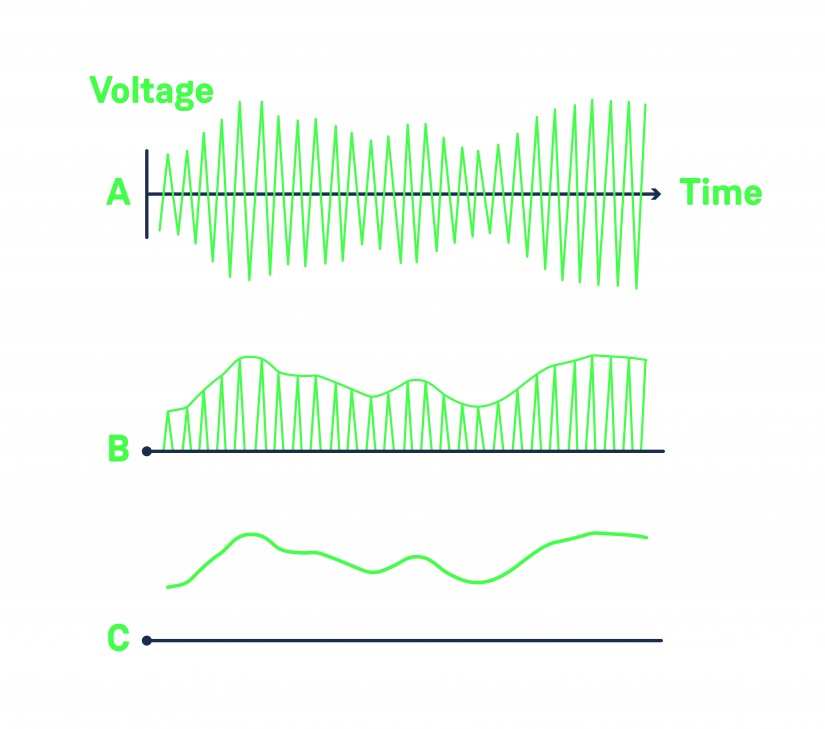 Diode Construction - What are Diodes Made of? 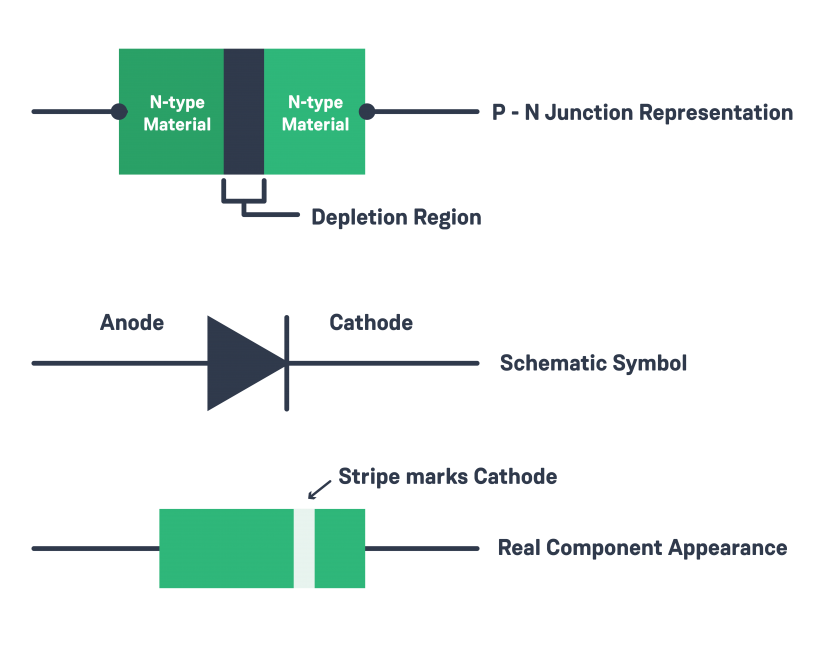 The most basic (and common), diode today is the silicon diode that consists of two pieces of semiconductor; N and P-type. When these two pieces of material are sandwiched together, the resulting material obtains diode properties whereby conventional current can only flow from the P to the N region (electron flow is the opposite to this with electrons flowing from the N material to the P material). 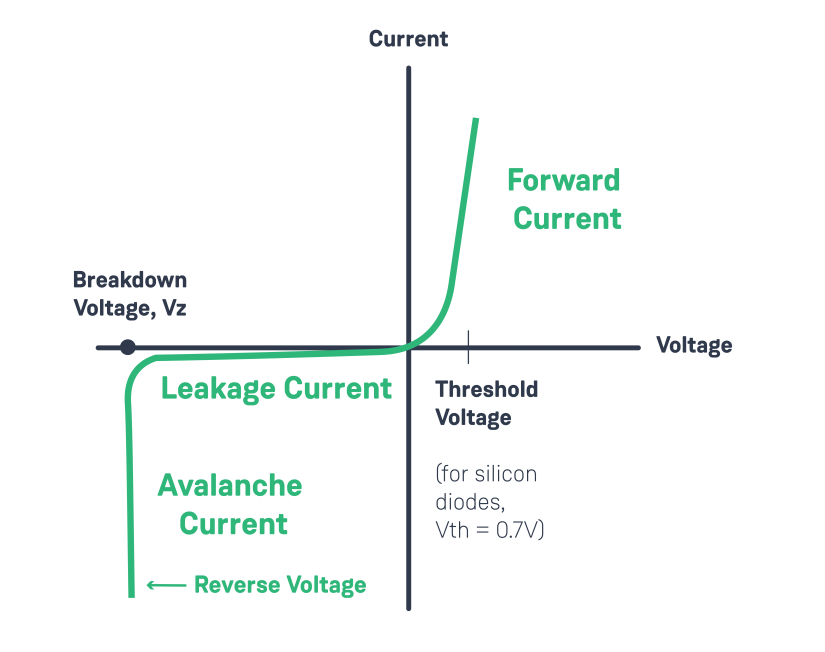 Interestingly, the forward voltage barely changes across a diode once it becomes conductive. This can be useful in creating voltage references that don’t change with the input power supply. 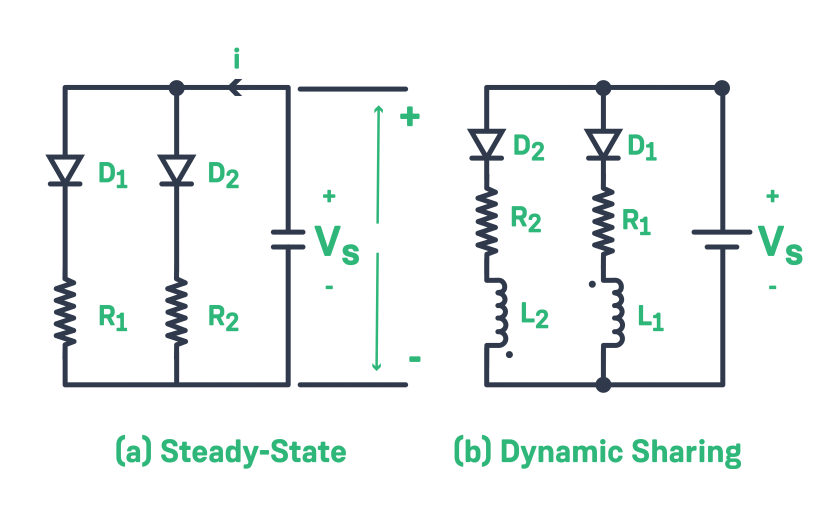 Like any component, diodes have power ratings meaning that they can only handle so much current. In theory, multiple diodes can be used in parallel to create a more powerful diode, but the reality is that this cannot be done. Because diodes can vary in forward voltage, multiple diodes in parallel may find that only one of the didoes is operating while the others cannot achieve the forward voltage they need. This leads to each diode one by one overheating and popping.

Diodes CAN be used in parallel but ONLY if a series resistor is used. The series resistor allows for each diode to achieve their needed forward voltage drops, but the drawback to this method is that each resistor will have current flowing through them, and thus dissipate power. 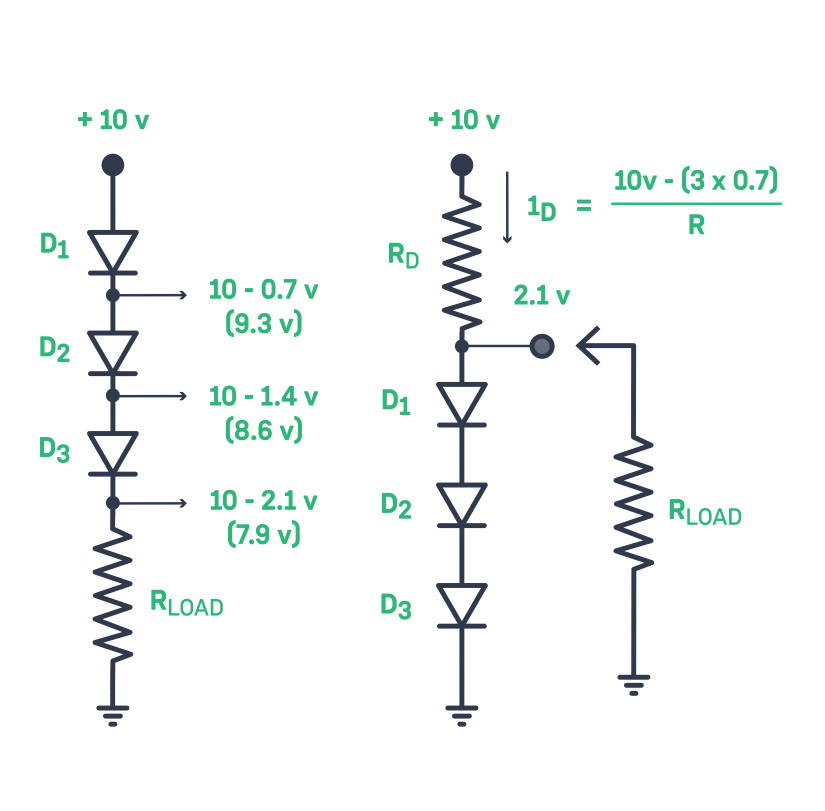 Diodes in series are incredibly useful for creating voltage references. If, for example, silicon diodes are used then each diode will series will have 0.7V across it. Therefore, if three diodes are used in series, then the voltage drop across all three is 0.7V x 3 = 2.1V. So long as the input voltage is greater than 2.1V then this voltage value across the three diodes will always be retained.

What is a Half-Wave Rectifier 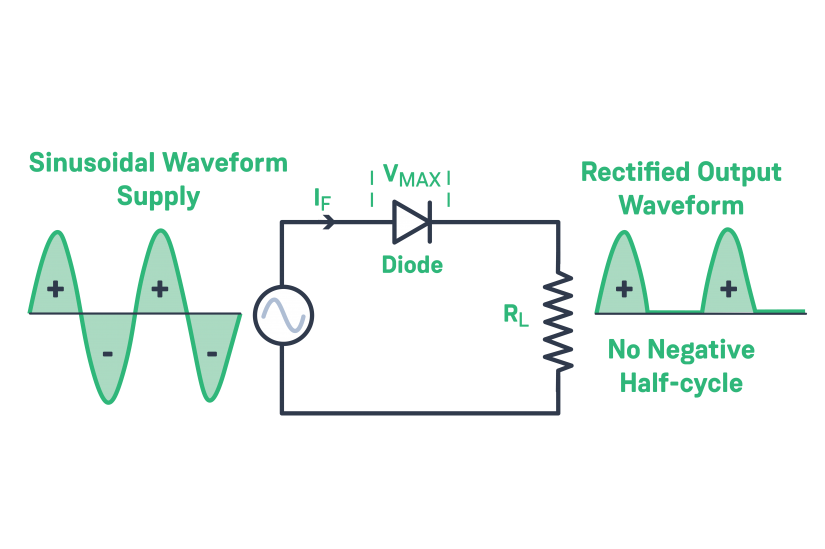 A half-wave rectifier is the simplest diode circuit consisting of a single diode. Such a circuit can be used for both low and high power, but is often seen in applications needing to remove the negative portion of an AC signal (such as an amplifier).

What is a Full-Wave Rectifier 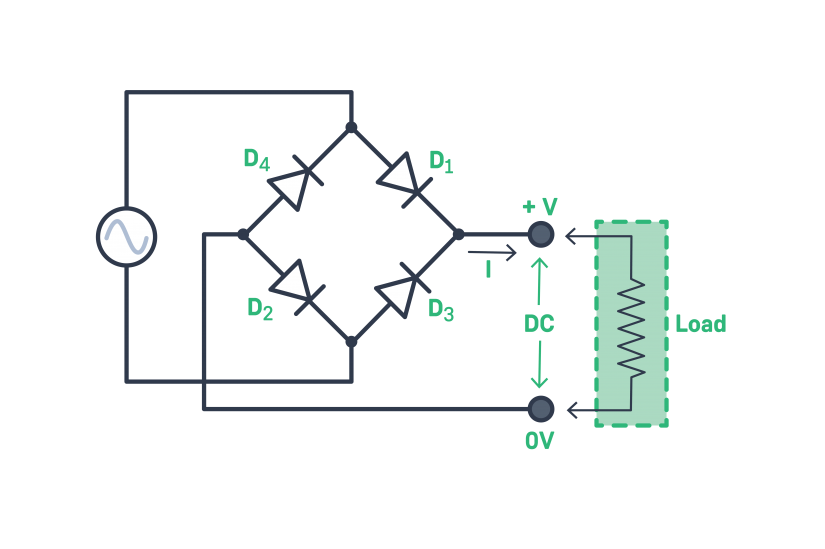 A full-wave rectifier is a special configuration of four diodes that rectifies an AC signal but retains the entire waveform. Such a circuit is almost exclusively found in power conversion circuits which convert AC mains into DC.

Voltage clamper circuits are those that limit the maximum voltage of a signal. This is exceptionally useful in circuits that can be damaged by external signals if those signals become too large.

As stated previously, diodes are available in different sizes, shape, and functionality. All diodes come in both through-hole and SMD forms with through-hole variants often being used in higher power applications. But, let's take a look at the other main diodes you will come across in the electronics world.

What is a Zener Diode?

Zener diodes deserver their own dedicated article due to their unusual reverse breakdown behaviour. Long story short, a Zener diode will not allow reverse current to flow until the reverse voltage goes beyond a specific value. This value can be adjusted for each diode, and what makes this action useful is that this voltage can be a large range of different values. For example, a Zener diodes reverse voltage breakdown could be made to be 5V meaning that a 5V reference can easily be made. This eliminates the need for multiple diodes in series.

What are Diodes - Diodes Explained

Diodes are incredibly important in circuits, and their ability to only allow electricity to flow in one direction makes them useful in signal processing applications. But the forward voltage drop of diodes is also useful for creating voltage references, as well as clamping signals to prevent damage to sensitive circuits, both analogue and digital.