Small form factor computers broadly fall into two categories. There are low powered Linux based single board computers (SBCs) perfect for simple software tasks and building hardware via general-purpose input/output pins. These are perfect if you want to get into robotics or the Internet of Things but don't give the same flexibility as the x86 architecture of regular computers.

Enter small form factor PCs – not much larger than the average ARM-based SBC, but packing x86 architecture and power until recently required a full desktop setup to achieve.

What if there was some middle ground? A powerful x86 PC that also was set up for hackers, makers, and hobby roboticists? There is, and it's called the UDOO Bolt.

What is the UDOO Bolt?

The UDOO Bolt is a powerful x86 SBC with a RYZEN embedded processor and AMD Radeon VEGA integrated graphics. Launched initially from a Kickstarter, It comes in two variants, the V3 and V8, both of which have 32GB onboard eMMC storage and up to 32GB DDR4 RAM.

Storage can be increased via M.2 SATA/NVMe drives or via a standard SATA connector. Dual HDMI outs take care of display, though one of the Bolt's two USB Type-C connectors can output video via DisplayPort alternate mode, and its two full-size Type-A ports are USB 3.0.

This board is notable for being "a portable, breakthrough supercomputer," but its GPIO options make it stand out most. Its 40 pin header features 10 GPIO ports, with dual UART and I2C, SPI, Keyboard Scan pins, and fan controller. This would be impressive as it is, but the UDOO Bolt also features an onboard MicroChip ATmega32U4 (the same chip found in the Arduino Leonardo and Pro Micro), exposing an additional 40 pin headers for connecting to the chip, along with 3 Grove connectors for analog input, UART/digital I/O, and I2C/digital I/O.

There are two versions of the UDOO Bolt, though they share a lot of the same characteristics. Only the CPU/GPU combo differentiates the two models, and both can sustain the same peripherals, storage, and RAM options.

Out of the two variants, the V8 is the bigger sibling, as it features a RYZEN embedded V1605B Quad Core/Eight Thread processor running at 2GHZ, though UDOO claims it can be overclocked to 3.6GHZ safely. It also features integrated AMD Radeon VEGA 8 graphics processing, which should run even modern games like Overwatch on low settings at 1080p.

The V3, by comparison, has an AMD Ryzen Embedded V1202B Dual Core/Four Thread processor running at 2.3GHZ with overhead for 3.2GHz when overclocked. The processor features a Radeon VEGA 3 GPU. Both are less powerful than the V8, but this is still a lot of computer for the price.

It's worth noting that since the release of the V8 and V3, UDOO released the UDOO Bolt Gear. This is exactly the same as the UDOO Bolt V8, just without the 32GB eMMC onboard storage.

The V8 and V3 differ only in their embedded CPU/GPU combo.

The rest of the specifications are shared between both boards.

What OSes can You Run on the UDOO Bolt - UDOO Bolt Android, Windows, and Linux Compatibility

As the UDOO bolt is x86, it'll run Windows 10 natively like any other PC. Not only that but both variants of the Bolt are powerful enough to give a regular desktop experience. The same is true for Linux, in fact, you'll be able to run pretty much any operating system on the Bolt, with AMD providing both 32 and 64-bit drivers.

UDOO provides an Embedded Application Programming Interface (EAPI) for working with its GPIO pins. It's available for both 32 and 64-bit Windows and Linux systems. 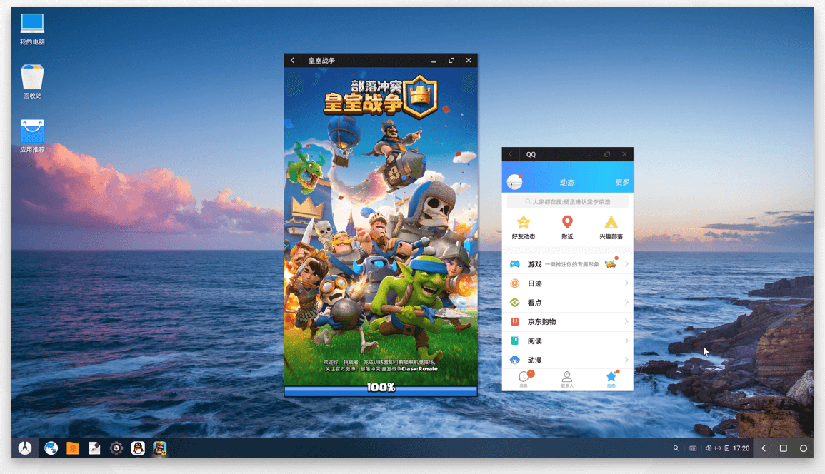 There are several Android OS builds that work with x86 architecture, though most are experimental and lack full hardware compatibility. Phoenix OS is notable for its big-screen OS for gaming, similar to the Steam Big Picture mode.

While the prospect of Android gaming on a powerful setup with a gamepad/mouse and keyboard setup will be compelling for some, the real power of the UDOO bolt lies in how versatile it can be.

What can You do With the UDOO Bolt - UDOO Bolt Gaming, Emulation, HTPC Use, AI, and More

It might be easier to ask, "What can you NOT do with the UDOO Bolt?" Let's break down a few things you could use the Bolt for.

The UDOO Bolt V8 comes with a CPU and GPU powerful enough for gaming, and not just retro gaming. You'll be able to play most PC games on lower settings and emulate all but the most recent consoles.

As the video shows, it'll run GTA V at 1080p with an acceptable framerate, and there is plenty of evidence of many relatively recent games running without issue. This is largely down to the RYZEN SoC's portable GPU. The VEGA 8 is said to more comparable to an Nvidia GeForce GTX 950M.

The form factor of the UDOO bolt makes it the perfect PC to use in the same way you might a Steam box, but it can do a lot more than that too.

UDOO Bolt as a Media Center/HTPC

Perhaps unsurprisingly, a PC that can handle most games can also work as a multimedia center. All you'd need to do is follow any guide for installing Kodi on Windows or Linux, and you'd be set. One of the unique aspects of the UDOO Bolt is its onboard Arduino compatible ATmega32U4 chip, meaning you can take your home cinema experience a few steps further than the average!

Again, x86 architecture simplifies a lot of things. Whether you are interested in Kodi, Plex, Emby, or any other media service, you'll likely be able to follow fairly normal installation instructions to get it working on the Bolt.

By far, the most compelling part of the UDOO Bolt is the dual 40 pin headers and grove connectors. Alongside the previously mentioned EAPI library available from UDOO, the onboard ATMega32U4 is treated as a USB device. This means you can use it with the Arduino IDE as if it were any other Arduino compatible development board.

This also extends to the Grove connectors, available from Seeedstudio, or UDOO via their Grove kits:

The unusual pairing of system pins and an onboard microcontroller make this a unique way to learn about programming across platforms. Undoubtedly the sheer power of the CPU/GPU combo will be a plus for those working in robotics and computer vision, and with a few tweaks, the UDOO Bolt could likely be used for machine learning too.

The rise of artificial intelligence (AI) isn't stopping any time soon, and more folks are dipping their toes into AI and machine learning development than ever. Like most moderately powerful computers, the UDOO Bolt can be used for most machine learning tasks. It's going to excel when it can inference over pre-trained models, though it could be used to train neural networks in a pinch too.

Like most SBCs, and in reality most computers, things change when you offload some of the AI processing onto an external coprocessor like the Google Coral USB Accelerator or Intel Neural Compute Stick 2.

With all of the potential uses listed for the UDOO Bolt, it's easy to forget that it's a powerful PC in its own right. Once you put it in a case, it resembles any other mini-PC.

If you are a fan of small form factor computing but find ARM-based SBCs too sluggish and other mini PCs too expensive, this could be worth a look!

One of the key claims UDOO made on their Kickstarter is that the Bolt would be 'almost twice as fast as a MacBook Pro 13."' This claim is largely true, though the comparison is somewhat reliant on the older generation CPUs in Mac products at the time as Daniel R Deakin of Notebook check details. 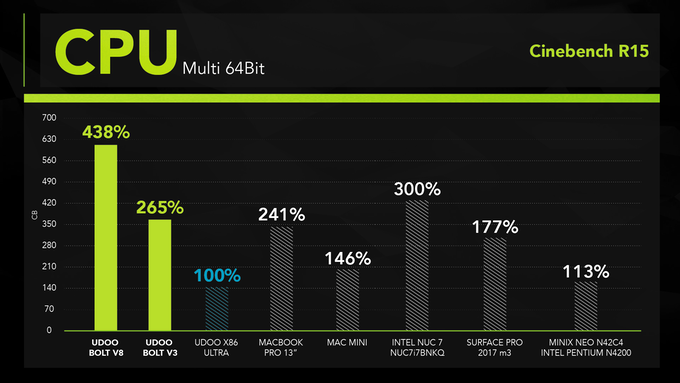 That said, there is no way to escape how powerful this SBC is. With a maximum safe overclocking speed of 3.6 GHz over four cores and eight threads and up to 32GB DDR4 RAM, it's one of the only true mini PCs that gives close to desktop performance.

UDOO provides accessories for the Bolt in the form of a specially designed metal enclosure, which exposes all of the I/O and leaves space for proper fan heat dissipation. They also sell generic M.2 dual ethernet and dual-band Wi-Fi kits, the former being an expansion to the one already found on the board, but the latter being the only way to add Wi-Fi/Bluetooth connectivity to the board.

Other optional add ons include M.2 SSD storage giving 128/256/512GB of extra storage space, and a 7Inch HDMI/USB touch screen display. All of the accessories are available via the UDOO Bolt Accessories page in the UDOO shop.

Should You Buy The UDOO Bolt?

The two variations of the UDOO Bolt are fascinating machines. Despite having slightly older architecture in the CPU and GPU combo, they are still faster than almost any other SBC. Fully specced, you'll be spending as much as you'd expect to on any mid-range laptop, but that only tells you half the story.

The options this board presents are almost limitless. It'll sit by your television as happily as it would in a computer-vision-based robot training itself to learn human weaknesses. UDOO aimed this computer at low-budget gamers and makers, though in reality, if you want a small, powerful computer for any reason, you are likely to be happy with the UDOO Bolt.