There are tons of maker boards on the market for a variety of purposes. Although most single-board computers (SBCs) such as the Raspberry Pi are ARM-based devices, x86 development boards offer additional functionality and versatility. Since ARM architecture is limited to compatible operating systems (OSes), you can't run full-fledged desktop releases such as Windows 10. Enter the LattePanda Alpha. This credit card-sized SBC features an x86 architecture and can therefore run Windows 10, Ubuntu, and a bevy of other desktop OSes for x86 devices. Outfitted with excellent connectivity, the LattePanda Alpha is a great board. But should you buy one? Learn all about the LattePanda Alpha, from what it is to who should buy one!

What is the LattePanda Alpha? 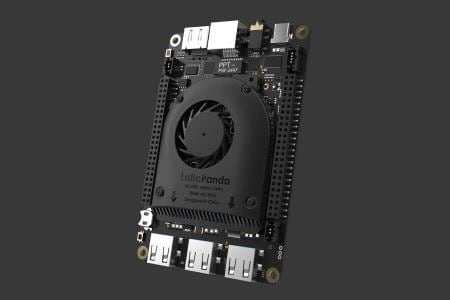 The DFRobot LattePanda Alpha is an x86 single-board computer. Because the LattePanda Alpha sports an x86 processor, it's capable of running Linux distros such as Ubuntu, Debian, and Arch Linux in addition to a full version of Windows 10. At its core, you'll find an Intel Core M3-8100Y dual-core 1.1-3.4GHz CPU paired with an Intel UHD Graphics 615 integrated GPU. There's 8GB of LPDDR3 RAM, dual-band 2.5GHz/5GHz Wi-Fi, Bluetooth 4.2, and Gigabit Ethernet.

On the input/output (I/O) side, the LattePanda Alpha sports three USB 3.0 ports and a USB Type-C. Dual M.2 PCIe slots let you easily add an M.2 SSD for operating system storage. Uniquely, the LattePanda Alpha packs in an Arduino Leonardo ATMEL 32U4 co-processor for Arduino connectivity. At 70% the size of an iPhone Pro Max and just 13.5mm thick, the LattePanda Alpha is small and unassuming. Nevertheless, its CPU benchmarks actually beat out machines such as the Lenovo C50 i5-5200U version and MacBook M3-7y32 variant in certain tests like Geekbench.

DFRobot offers the LattePanda Alpha 800S and the LattePanda Alpha 864S. The two different SBCs are completely identical but the 864S comes with a 64GB eMMC module. Both boards rock the exact same Intel Core M3-8100Y dual-core CPU and Intel UHD Graphics 615 iGPU alongside 8GB of RAM. The LattePanda Delta however is a budget-oriented maker board. While the Delta maintains an x86 architecture, it's powered by an Intel Celeron N4100 quad-core CPU clocked at 1.1-2.4GHz paired with an Intel UHD Graphics 600 iGPU and 4GB of RAM. The LattePanda Delta is still capable of running x86 Linux distros such as Ubuntu and Debian as well as a full version of Windows 10.

What OSes can the DFRobot LattePanda Alpha Run?

The LattePanda Alpha is fully compatible with standard Linux distros like Ubuntu, Debian, Pop!_OS, Linux Mint, and Kali Linux. You can run retro gaming OSes such as RetroPie, Batocera, Lakka, and Recalbox or home theatre PC Linux distros such as OSMC, LibreELEC, and OpenELEC. Windows 10 will work just fine. Chrome OS works perfectly for a Chromebox on the LattePanda. Moreover, Android x86 images are supported by the LattePanda Alpha, so you could spin up an Android desktop with the likes of Phoenix OS.

Because of its x86 architecture, the DFRobot LattePanda Alpha boasts extensive operating system compatibility and is therefore well-suited to a variety of projects. A basic Linux, Windows, or Chrome OS runs flawlessly for web browsing, office productivity, and even audio as well as image editing. Light video editing should be fine too. You could create a Hackintosh PC with a LattePanda for running macOS on a non-Apple device.

On the maker side, the LattePanda Alpha's extensive I/O makes it great for Internet of Things (IoT) and embedded applications. It's energy-efficient yet high-performing. AN embedded DisplayPort (eDP) serves as a full-digital interface for sending high-resolution audio and video signals to a variety of devices. Flexible printed circuit (FPC) cable connectivity delivers power, data, and control signals via one cable, no need for a power supply. As such, the LattePanda Alpha is great for digital signage and embedded projects. The LattePanda Alpha serves as a strong foundation for robotics projects such as autonomous vehicles. Its built-in Arduino co-processor makes Arduino microcontroller do-it-yourselfing (DIYing) a breeze.

Although the LattePanda Alpha's integrated GPU, an Intel UHD Graphics 615, won't max out many AAA titles or even slightly older games, it's fine for running the likes of Counter-Strike Go, Doom (2016), and Half-Life 2 should run at medium-low on 720p or 1080p at 30-60 FPS (frames per second). That's more than respectable for a single-board computer. On the emulation side, high-end emulation is great for even systems such as PlayStation Portable (PSP), Nintendo GameCube, and Sony PlayStation 2 (PS2).

What's more, you can actually hook up an dedicated graphics card directly to the LattePanda using an M.2. Performance will vary based on the specific GPU you hook up, but an NVIDIA 2080 XC Ultra paired with the LattePanda Alpha proved capable of 4K gaming. Of course, the non-user upgradeable CPU is a weak spot and will bottleneck a beefier GPU. The low-end CPU isn't designed for gaming, but it's nice to know that you can connect an external GPU to the LattePanda for applications such as gaming, home theatre PC use, or data processing such as artificial intelligence (AI) and machine learning. One LattePanda community member even designed a small-form-factor (SFF) gaming case for the LattePanda Alpha that fits the board and an NVIDIA GTX 1650. Although you can connect a high-end GPU to the LattePanda Alpha, you probably won't want to use it for 4K gaming. But a portable retro game console for emulation and PC games works just fine, with one build even resembling the Nintendo Switch.

The Competition: LattePanda Alpha vs. Raspberry Pi 4 and other SBCs

While it’s a bit unfair to compare the LattePanda Alpha and the Raspberry Pi 4, many will wonder about the two different maker boards seeing as they're both SBCs. The disparity in price and specs makes this a bit of an apples to oranges comparison. Still, there's some overlap. Both the Raspberry Pi 4 and LattePanda Alpha function as basic desktops. The advent of the Raspberry Pi saw several hardware and software improvements that further posited the Pi as a desktop device. A faster processor, choice of up to 8GB of LPDDR4 RAM, and dual micro HDMI outputs provided better desktop capabilities for the Raspberry Pi. Additionally, operating system improvements in the likes of Ubuntu, Raspberry Pi OS, and other distros makes the Pi compatible with printers and able to even tackle some tasks such as audio or video editing.

Of course, pretty much any task that the Pi can handle, the LattePanda Alpha can perform better. Though its dual-core Intel Core M3-8100Y and Intel UHD Graphics 615 iGPU are underpowered compared to many desktops or laptops, those specs blow the Raspberry Pi 4 out of the water. Granted, you could buy four or five Raspberry Pi boards for the price of one LattePanda Alpha.

Should You Buy the LattePanda Alpha - Final Thoughts?

Overall, the LattePanda Alpha is an absolutely fantastic SBC. Its x86 architecture makes it more versatile than the majority of ARM-based dev boards on the market. With an Intel Intel Core M3-8100Y dual-core CPU and an Intel UHD Graphics 615 iGPU, it's powerful than most development boards like the Raspberry Pi, Odroid XU4, and ASUS Tinker Board. When compared to x86 SBCs, the LattePanda Alpha still manages to hold its own. The Core M3-8100Y is stronger than many Intel Celeron and Atom CPUs, while falling behind some Celeron processors, as well as AMD Ryzen Embedded processors. Although the price is a bit high at over $400 USD standard retail, the LattePanda Alpha's ability to run a desktop GPU further expands its capabilities. As such, it's an incredibly versatile single-board computer that's just as comfortable running AAA PC games and full-on x86 OSes like Ubuntu or Windows 10 as it is handling embedded projects, robotics, and digital signage. If you want a small-form-factor PC that balances processing power and energy efficiency, delivering desktop-replacement in a tiny package, the DFRobot LattePanda Alpha is a great option for a variety of use cases.