Most development boards for microcontrollers provide an easy entry point for working with different chip architectures. To hobbyists, Arduino is the most familiar version of this, giving a simple way to interact with mostly AVR microcontrollers. In the wake of Arduino's popularity, other cheap small form-factor development boards have hit the market. NodeMCU style boards, most notably, give people an easy platform to work the esp8266 chips, and "Blue Pill" style boards do the same for the STM32 series. 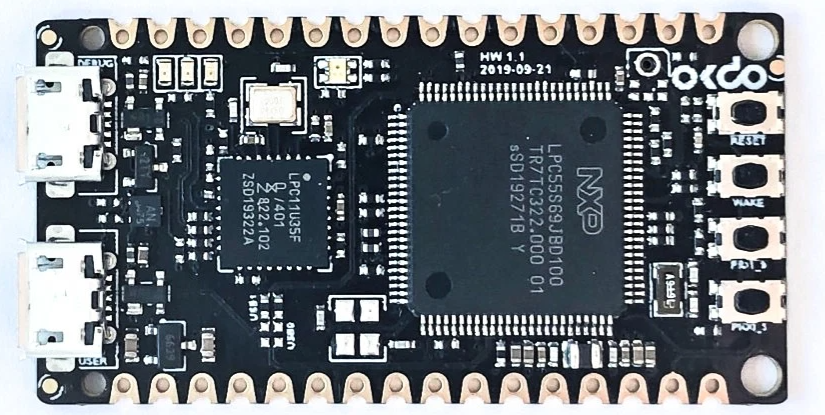 The OKdo E1 is a small development board based on the NXP LPC55S69JBD100 dual-core Arm Cortex M33 microcontroller. Not much larger than an Arduino Nano, it costs under $15 USD and runs at 150 MHz per core. This is a pretty big deal, as, despite its not exactly catchy name, the NXP LPC55S69JBD100 (LPC55S69 going forward) is a serious industry-standard chip.

Access to this chip via a cheap and small development board is perfect for both hobby devs and industry professionals wanting to get used to both the architecture of the dual-core package and it's accompanying free development environment, MCUXpresso.

What Makes the OKdo E1 Special - What is the Okdo E1? 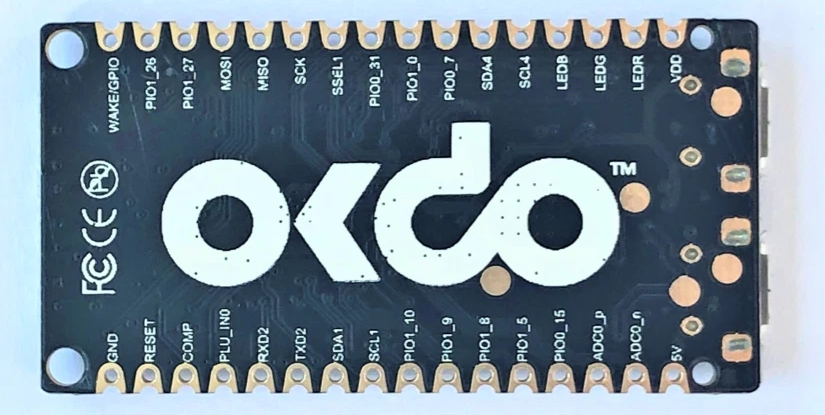 There are a few nice touches to the OKdo E1, which we'll cover later in this review, but on the surface, it's clear that OKdo has packed as much as possible into a small space to give developers options.

The processor comes equipped with ARM's TrustZone technology, along with a Floating Point Unit (FPU) and a Memory Protection Unit (MPU). Add to this a suite of tools for cryptography and super fast fixed and floating-point Digital Signal Processing (DSP), and it's clear this is aimed at the secure industrial Internet of Things IoT market.

Interestingly, for a device that seems so equipped to work in this way, there are no onboard Wi-Fi, Ethernet, or Bluetooth connectivity options. This was presumably to save space, and something pretty trivial to add after to the fact. Given that this processor can work with USART, SPI, I2C, and I2S interfaces, and can support up to 64 general-purpose input/output (GPIO) pins, it can do pretty much anything you want it to.

Alongside the powerful processor, you also get two USB 2.0 micro USB hosts (one of which is user-definable), four buttons (one of which is assignable), and an RBG LED. Another nice touch for those moving from Arduino boards to the OKdo E1 is the optional expansion board making all Arduino shields compatible with the E1.

Should You Buy the OKdo E1?

We'll look at a few of the more interesting details of the OKdo E1 in a moment, but for now: Should you buy an OKdo E1 development board? 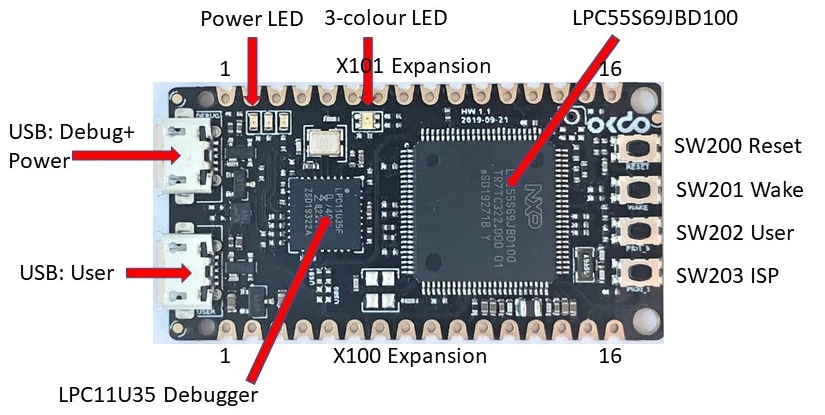 Probably, yes. This is a cheap, small, well thought out development board packing some serious features. If you are interested in getting started with industry-level microcontrollers, OKdo has created a powerful budget entry point with the E1. Many examples from other development boards using the same family of chips work with the OKdo E1 with little modification, and OKdo has a simple getting started guide.

While there are differences, the process of using the IDE with the provided USB debugger is a skill that can be used across the industry with different microcontrollers. If you've previously worked with Arduino and are looking for a step up, this is perfect.

That said, if you are a beginner, this might still be quite a steep learning curve, and people new to microcontrollers might want to work their way up via the Arduino-like boards first.

For such a tiny board, the OKdo E1 has a pretty impressive set of features.

OKdo E1: The Tip of an Iceberg

The E1 is the first development board from OKdo, and to my knowledge, they were only a retailer beforehand. For a first entry into the market, the setup of the E1 has some creative choices.

The LPC55S6x family of SoCs from NXP gets a lot of use in the industry, and NXP provides several development boards for them. Most have a few extra peripherals like a microSD card slot and dual-audio I/O, but fundamentally they work the same way. There's no 16 MHz timing crystal on the E1, but there are headers for one if you need to attach it later.

This means anyone wanting to make a start with this architecture has a wealth of information to draw from, and many SDK examples for boards featuring the LPC55S6x family will work on the E1's LPC55S69 with little modification.
A Microcontroller Based on Security

The OKdo E1 shares the same flexibility as most development boards, but it is clear that the focus here is on cryptography and security.

The processor leverages Arm TrustZone technology, explicitly designed to help developers create secure APIs within embedded hardware. While the TrustZone tech works across many Arm Cortex setups, there is a distinct getting started guide for the SoC in the OKdo E1.

With security in IoT devices becoming increasingly more important, it's a smart move to have everything you need for secure development in one small package.

Despite the focus on security, you can completely ignore all of that side of it and still have a cheap, small, powerful development board for learning about the LPC55S69 microcontroller. OKdo has made this even easier for Arduino users, with the release of an expansion board granting compatibility with Arduino shields: 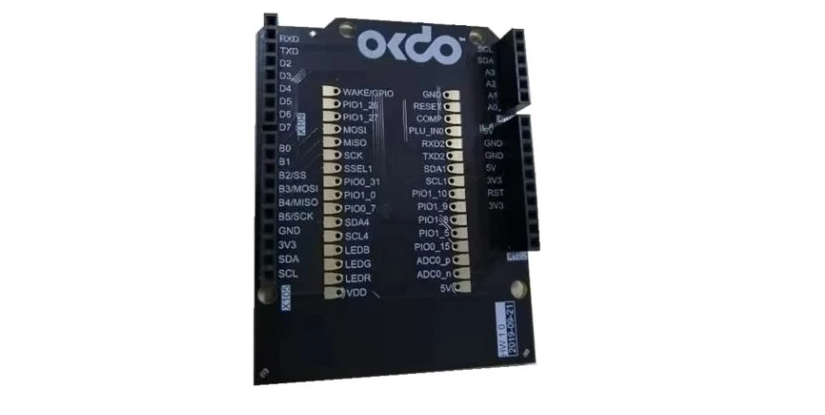 This simple but effective expansion highlights another nice touch on the E1. It's one-sided, with castellations around the edges. This means that the whole development board is essentially a surface mount component, and you could roll your own peripherals board to attach it to.

Combining a small, easy to use dev board with the Arduino expansion board's easy peripheral hot-swapping makes the OKdo E1 a great, cheap choice for beginners and professionals alike.