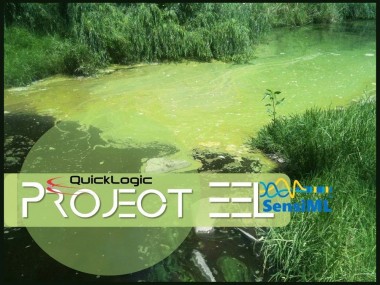 Monitoring river water quality based on open-design multi-parameter sonde, built along with QuickFeather and SensiML service.

Once water is contaminated, it is difficult, costly, and often impossible to remove the pollutants. Still today, 80 per cent of global wastewater goes untreated, containing everything from human waste to highly toxic industrial discharges. In addition, pollution of freshwater ecosystems impacts the habitat and quality of aquatic & geo-logical life cycle. 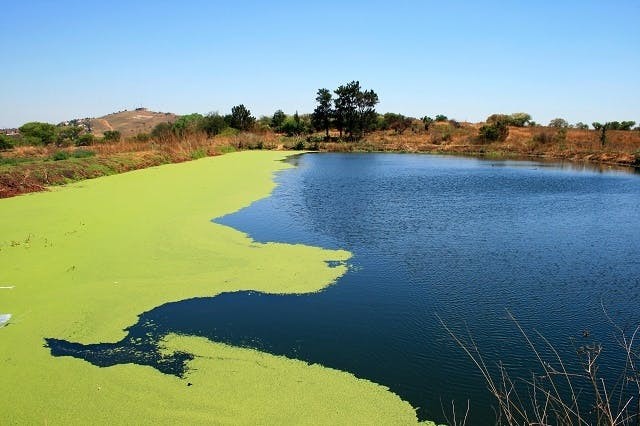 Increase in water temperature can result in the death of many aquatic organisms and disrupt many marine habitats. For example, a rise in water temperatures causes coral bleaching of reefs around the world. Increase in Eutrophication-levels that are further responsible for harmful algal-booms (HAB), which impact local wildlife and viability of the water, leading to anoxic conditions and so-called “dead zones.”

The challenge is to utilize low-cost instrumentation, IoT and Edge Analytics and provide meaningful insights in order to create awareness among community regarding the problem-statement.

While there exists numerous ready-made solutions for monitoring water quality from tech companies likes Xylem-Analytics, OTT-HydroMet, Libelium, and others. But, owing to their associated costs, these measurement instruments are widely used by research companies, universities and institutes. On the other hand, platforms like PublicLab and the Cave Pearl Project readily fulfill the demands of developing open-source technology categorized under CitizenScience.

1) Open-design Sonde, which consists of multi-parameter sensors for measuring water-quality like: Conductivity, Turbidity, TDS, Temperature, Hydrophone, Colorimeter and water-flow state that are measured over ATtiny3217 and combined with edge-analysis via QuickFeather board. The entire hardware ecosystem is mounted within waterproof enclosure and powered over cable from the Base unit. 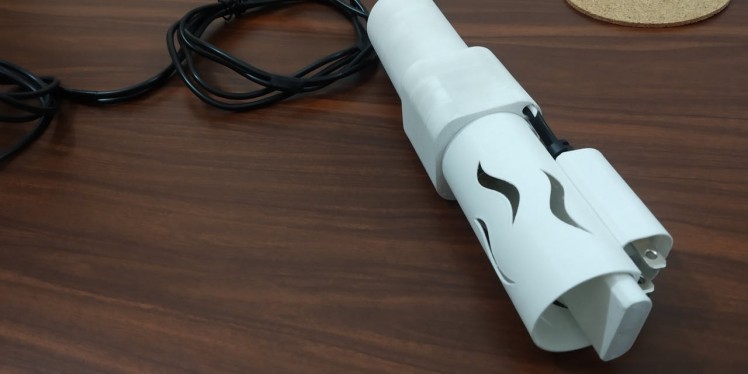 2) Sense & Acquisition Base Unit, consists of Huzzah32 and LoRa platform for getting data from submerged Sonde and combines them with GPS, Ambient environment and Surface water temperature parameters.

3) Gateway, is based on RPi ZW that fetches the data over LoRa network and pushes data into time-series InfluxDB cloud service for end visualization and alerts. 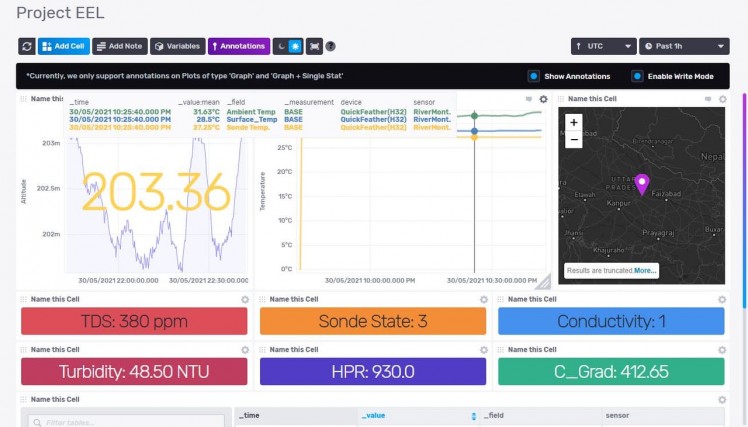 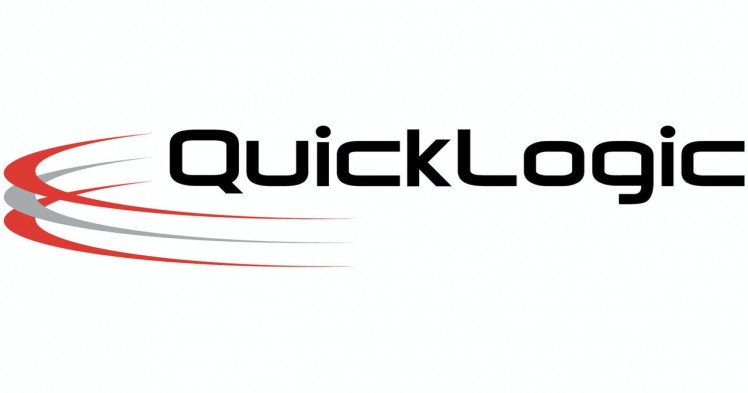 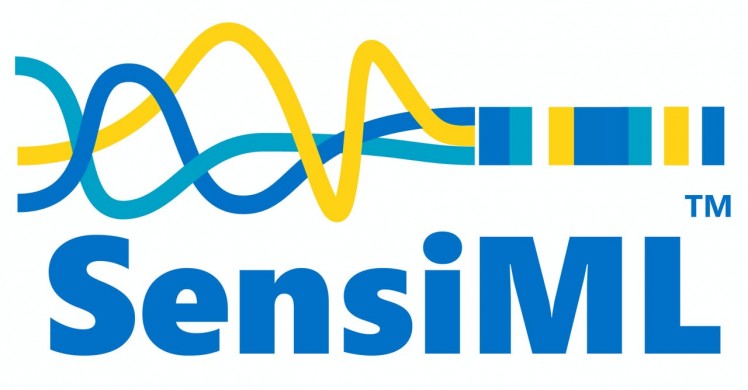 During the project completion numerous challenges were encountered regarding programming QF from SDK, integration of external sensors (!I2C), implementing custom firmware, data analysis & integration of knowledgepacks. Kudos, to our contest-organizers that supported our development through interactive ‘serial’ webinar sessions and hardware support-tickets.

For our test-purpose, we utilized simple-stream binary provided by SensiML, that helped to understand the SensiML DCL & Analytics Studio platform. Thanks to Arduino“having11”Guy introductory tutorial. 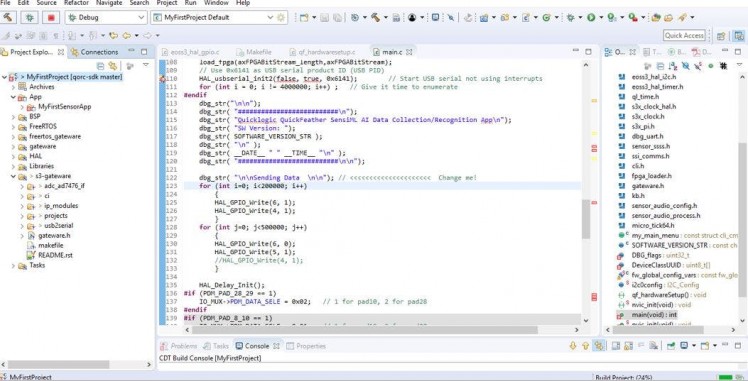 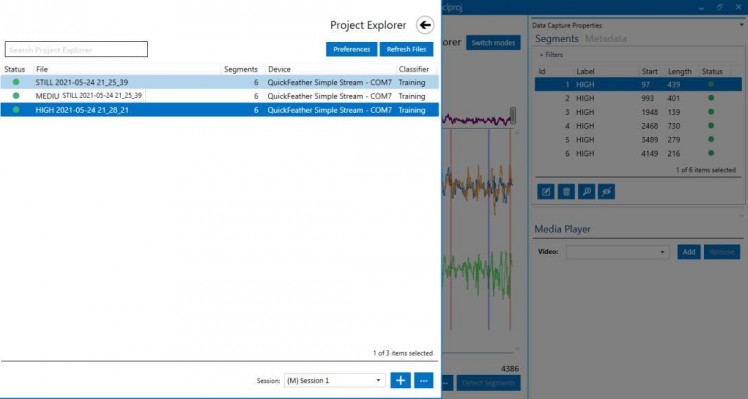 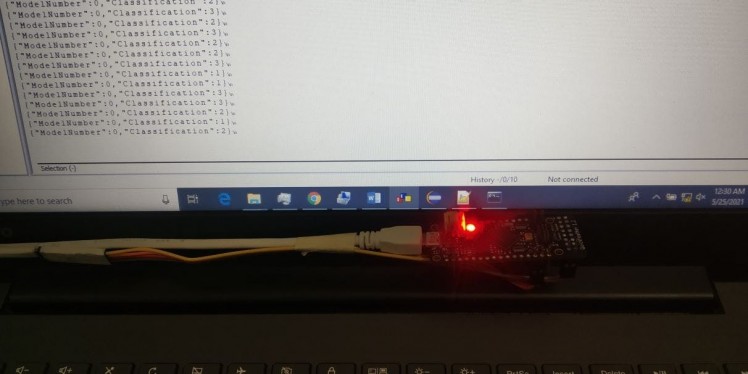 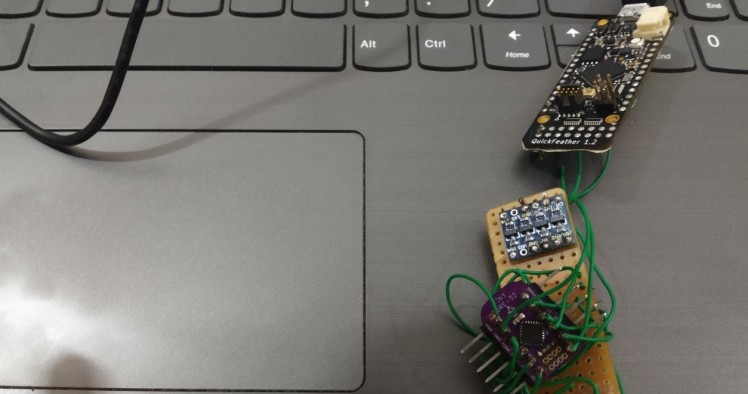 Using the on-board accelerometer sensor on QF board, water flow state [F.R. State] was determined as per three class labels: STILL, MEDIUM and HIGH. Minor modifications were done with provided qf_ss_ai_app source code like reducing the baud-rate from 460800 to 115200 and the main() initializing sequence, afterwards the classification data from QF was captured over UART of ATtiny and packetized into string, that is further transmitted over UART to Huzzah32 board. 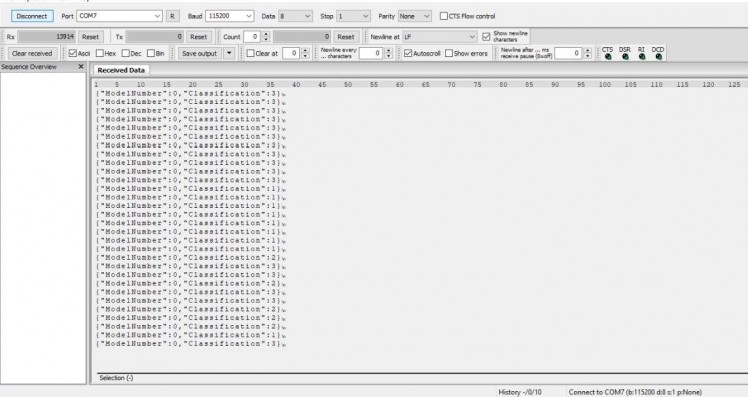 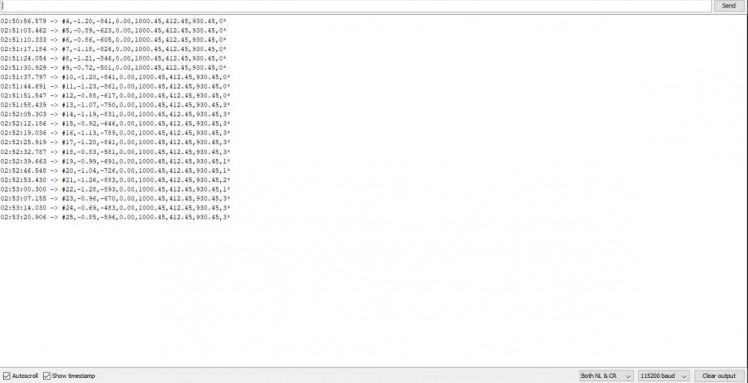 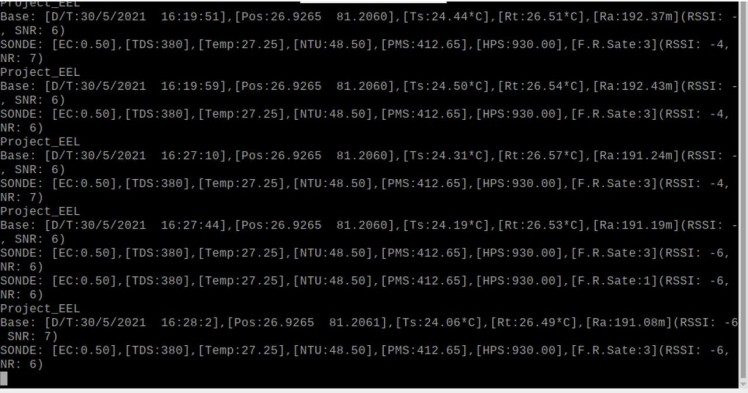 After testing the initial concept & completing sonde enclosure design. The parts were 3D printed on our regular printer and heavy amounts of glue, clear varnish and silicone sealant was used for mounting and sealing the sensors once and for all. 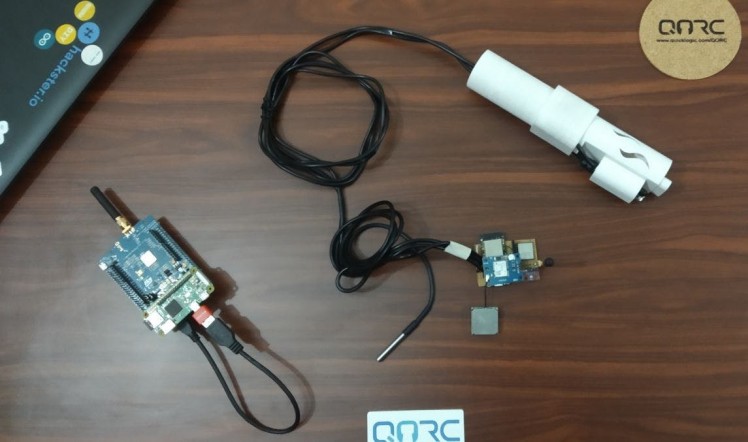 Initial Base Unit design based on ATtiny3217

required parts that can be printed/machined/manufactured

Printing sub-assemblies at a time.(saves lot) 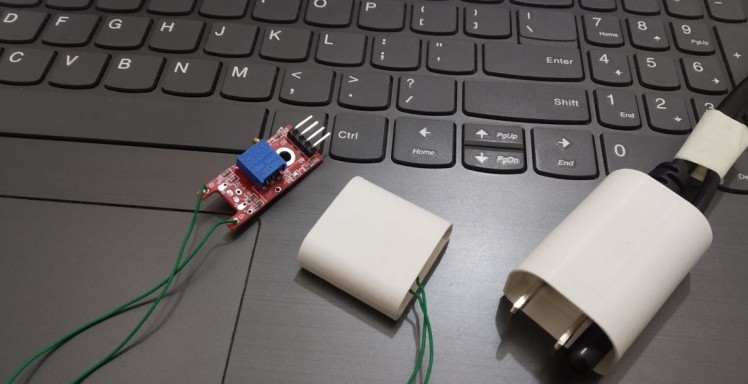 Pre-checking the hardware and sensors.

While, some units like EC & TDS were calibrated as per standard NaCl buffer solution in different concentration, excluding the turbidity sensor (due to lack of standard Formazin solution at the moment), and hence was programmed as per given Nephelometric equation curve obtained from the dfRobot's webpage.

Overall, the entire build worked as expected, but still needs to be verified by standard laboratory grade instruments.

InfluxDB provided numerous ways of data ingestion & integration with it's client libraries support for arduino, scala, kotlin, python, swift, C#, etc. and numerous telegraf plugins that can be further linked to grafana data visualization platform. In the free-tier one can get max. of two buckets for data storage, a month of data retention along with slack notification for prototyping our PoC. 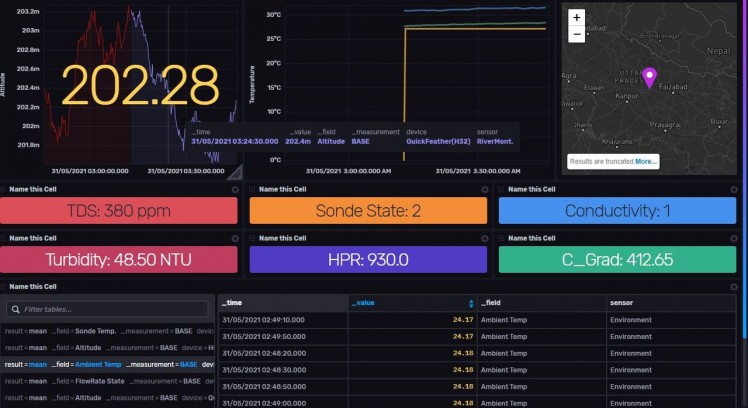 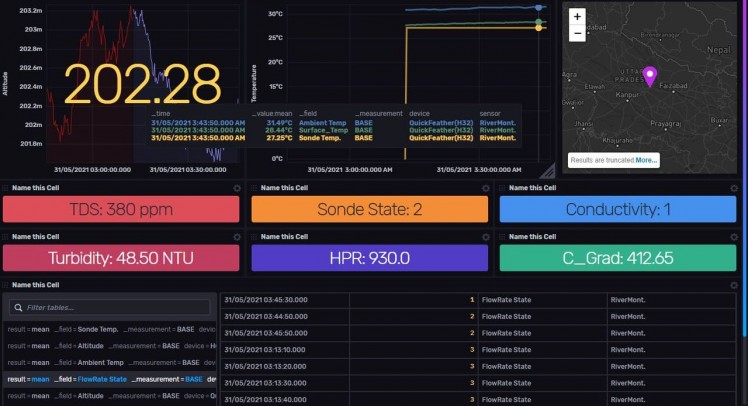 Conclusion: Quickfeather and SensiML platform possess huge possibilities for true intelligent-edge-computing. Personally, learnt a lot during the entire project completion and would continue to expand on our project with more sensor-integration like DO, pH and water current direction estimation using magnetometer.

Further, getting onboard pressure, accel and microphone as single collection and classification instance still proves to be a personal challenge aka hardware-nightmare.

Muxing low cost hardware and Open-source architecture along with machine-learning will continue to be the next big trend in the field of IoT.