Another day, another single-board computer (SBC) hits the market, but this one from Libre Computer Project hopes to be a more powerful “drop-in replacement” for the Raspberry Pi. But does it meet the high standard of the Raspberry Pi? Well, let's find out. 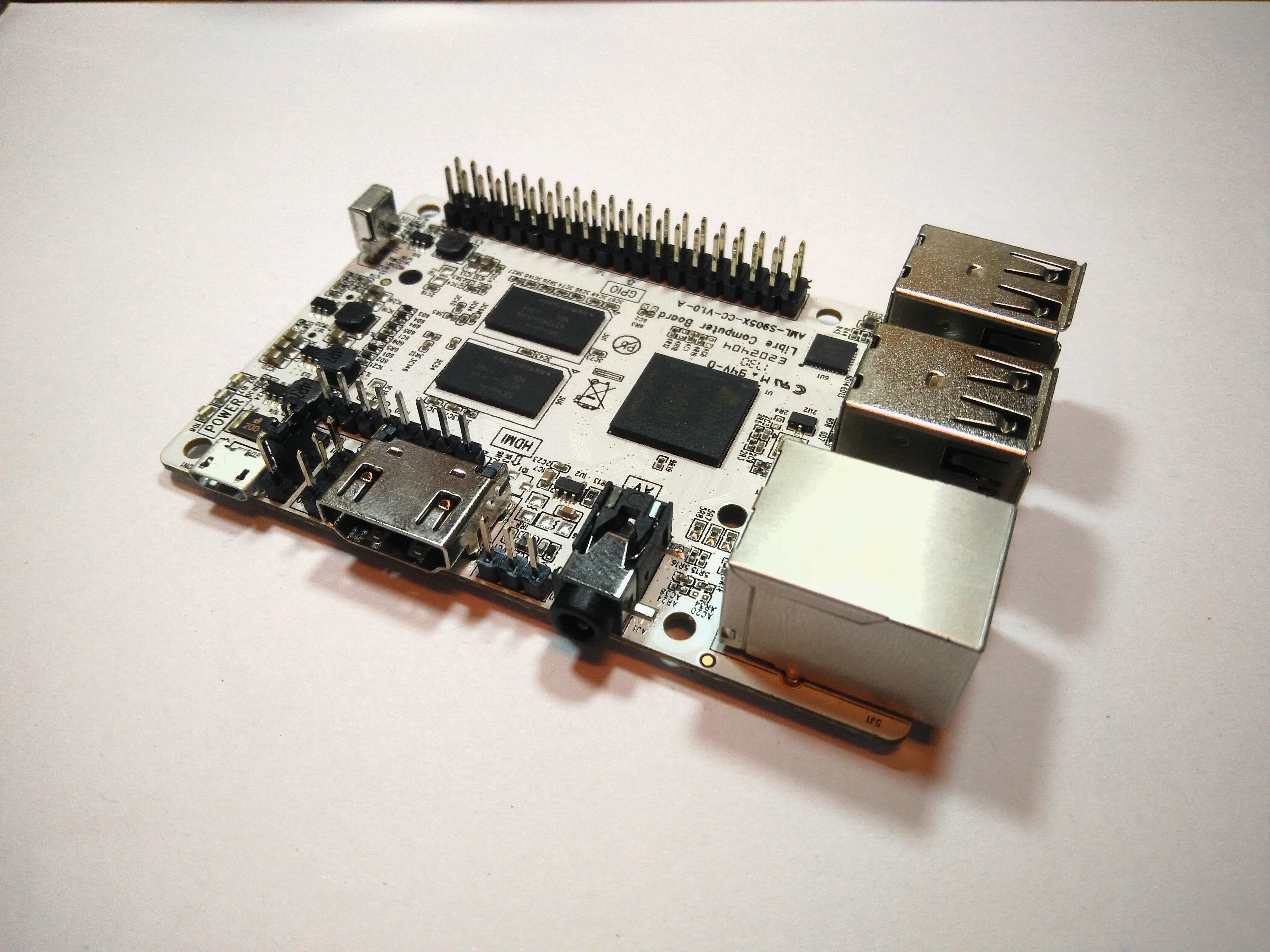 The AML-S905X-CC (Codenamed: Le Potato) layout is almost the same as a Raspberry Pi 3. We have 4 x USB2.0 ports, 100M Ethernet, a 40 pin GPIO, and micro USB, HDMI and analog output in the same locations as a Pi. On the underside of the board, we have a micro SD slot which will need cards of 8GB or greater for use. There is also an eMMC connector for use with higher speed eMMC cards that clip on to the underside of the board. These can be purchased separately.

The Amlogic S905X quad-core system on a chip (SoC) is made up of a processor, an ARM Cortex A53  running at 1.5GHz. Graphics are handled by an ARM Mali-450 (Open GL and Open VG) which handle 4K video output. RAM comes in either 1GB or 2GB, for our review we have the 2GB model. 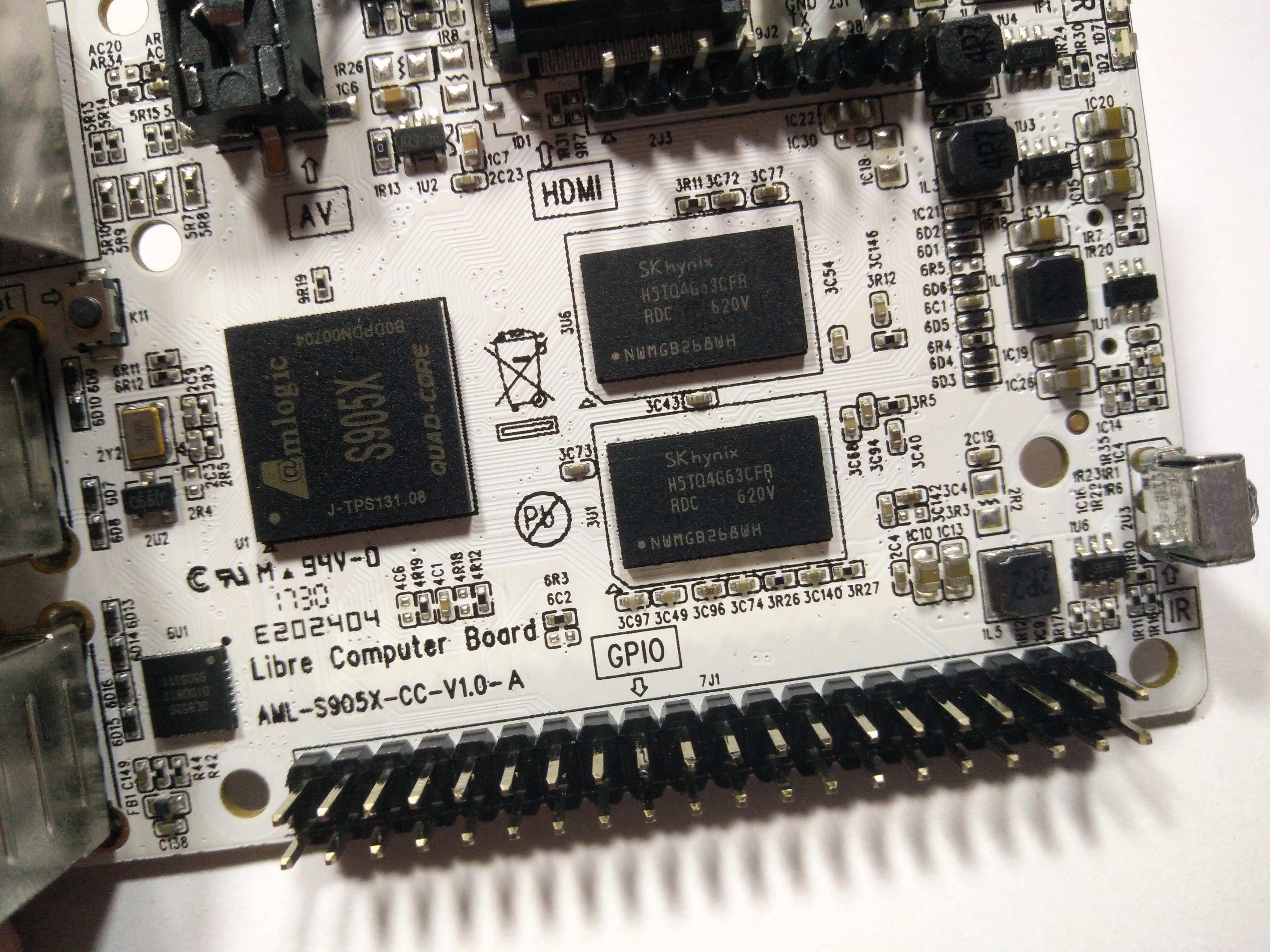 What is missing from the board layout is the DSI and CSI connectors for the Raspberry Pi Display and Camera, so if you are looking to drop this board into a project requiring those peripherals, you are out of luck.

We tested the board with the latest Linux image available, in this case, it was Ubuntu 16.04 running the 4.13.3 kernel (4.14 kernel work is ongoing by the team and a release is expected soon). Le Potato can also be used with Android and a preview image is available.

Downloading the micro SD card image and flashing it to a blank card was the same process as that of a Raspberry Pi. We inserted the card, our peripherals and then powered up. 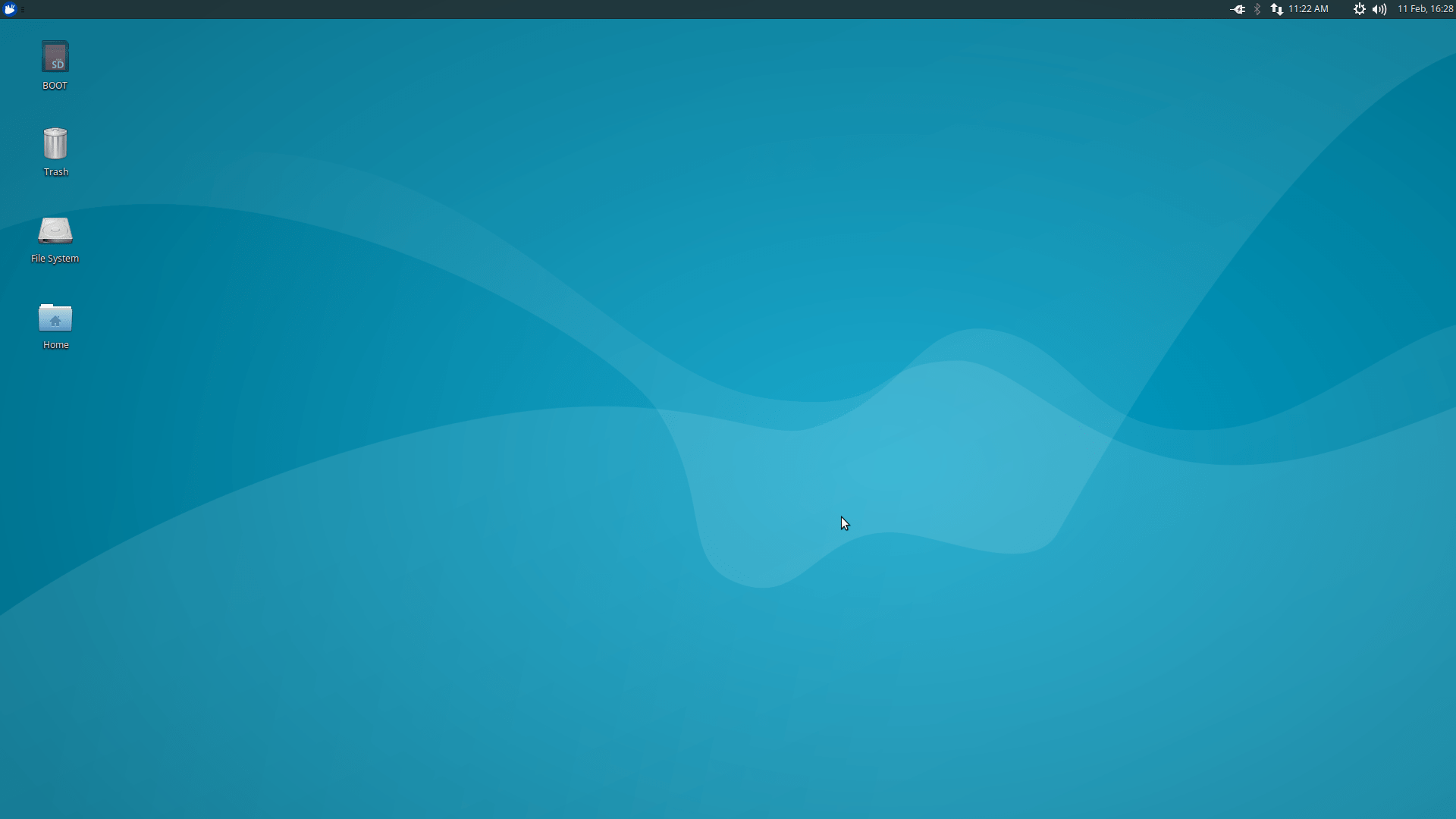 The desktop is a typical XFCE desktop, clean with minimal icons. The main menu is located in the top left and has various filters that are used to group applications by their subject/use. We can also add applications to a favourites list, for quick access to common applications. 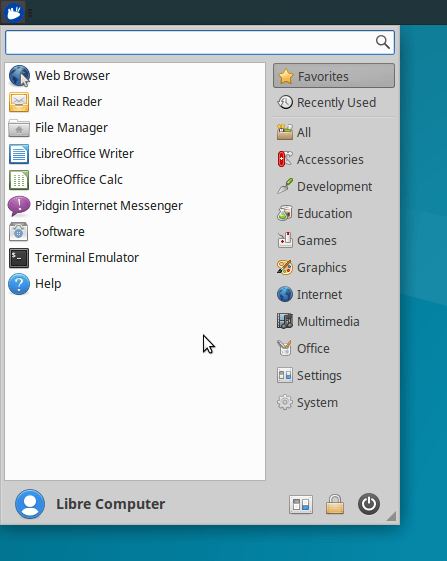 In the top right of the screen are the settings, networking, Bluetooth (if you have a Bluetooth dongle attached) and volume control. 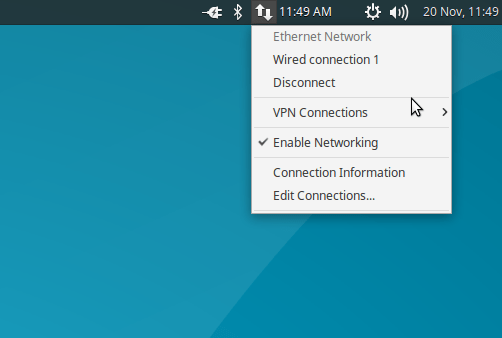 Being an Ubuntu release, there were a number of applications pre-installed, ranging from the standard LibreOffice to the uncommon Gigolo, a rather nice interface for mounting local and remote filesystems (we remember using this with Crunchbang Linux about 8-10 years ago.) The desktop experience is solid, it feels faster than a Raspberry Pi 3. 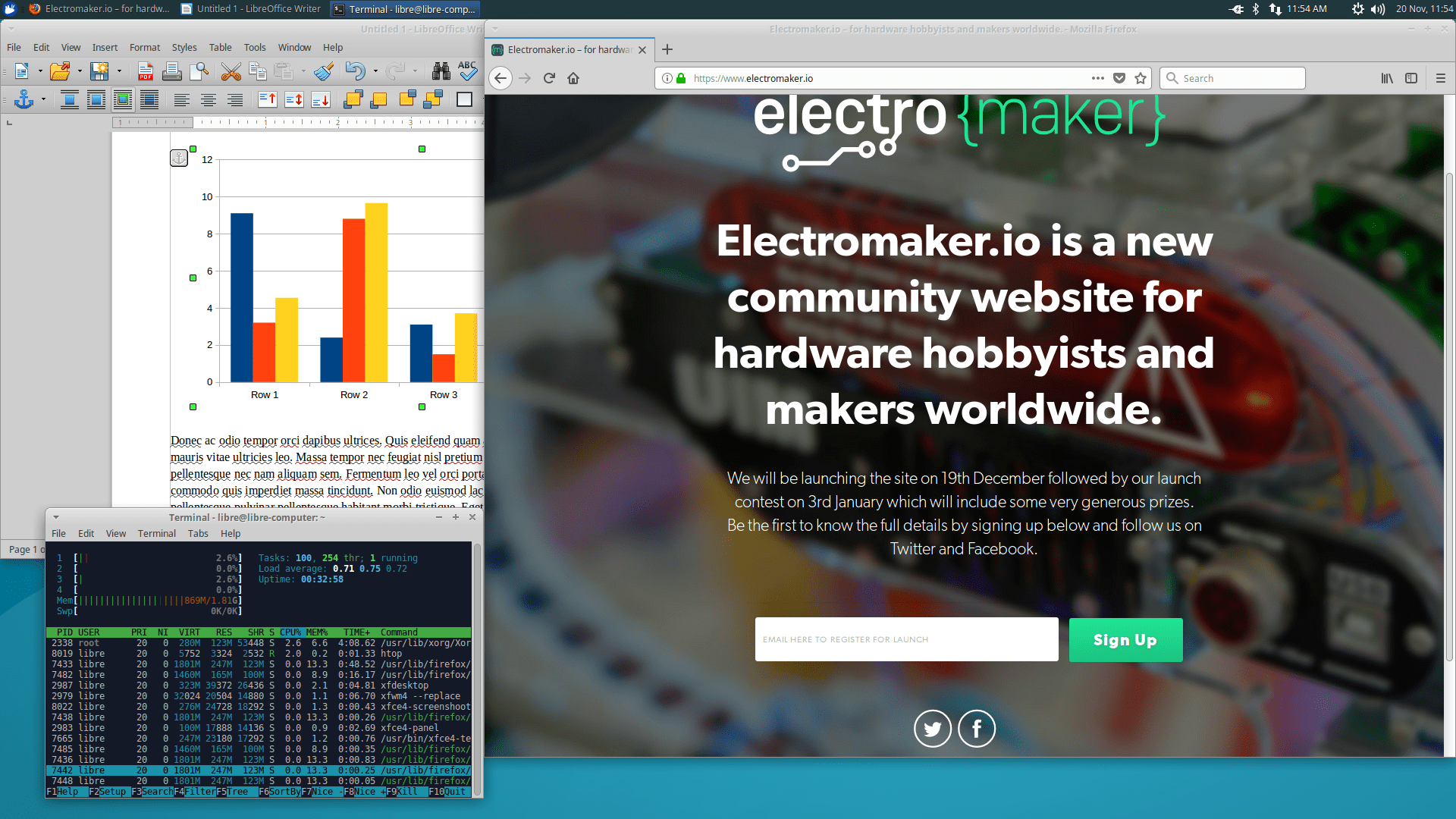 We installed the popular image editor GIMP using the terminal and the application felt quick enough for basic tasks, power users may feel differently about it, but the Le Potato could be a serious contender as a replacement to a desktop computer. The desktop experience was great, the XFCE desktop worked well and felt easy to navigate.

But what is it like as a device for a maker? Well we would love to tell you more, but sadly we could not find any Python libraries to interact with the GPIO, so right now we cannot recommend this board for maker projects. The same is true for testing 4K video as we lack the equipment to reliably test this feature. 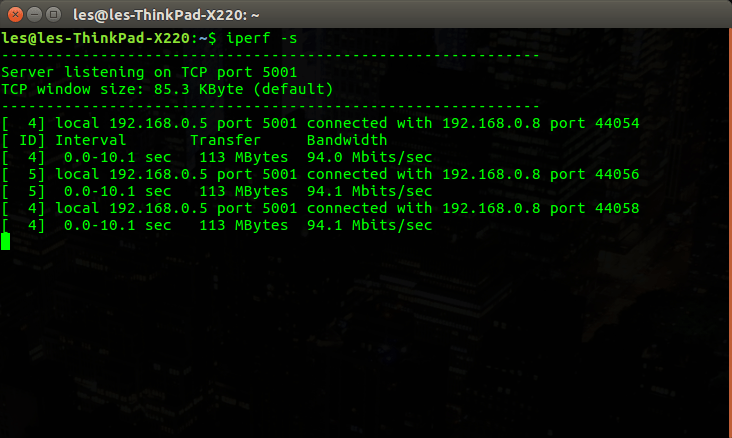 Our network performance test confirmed that the Ethernet port is limited to 100M, unlike other boards such as the ASUS Tinkerboard, this is a shame as a faster Ethernet port, more RAM and faster processor would make this an ideal home server that would happily serve media across the network and use very little power. In a headless configuration, it uses around 200mA at 5V, very light power use at approximately 1W!

The lack of WiFi and Bluetooth is another letdown; we understand the reason why they were omitted, due to the testing required for radio devices, which would have delayed the project by quite a considerable amount of time.

Le Potato is a good board, it lacks the community of the Raspberry Pi, well the Pi has got a five-year head start, and this shows in the support offered. The lack of a library for use with the GPIO is a real shame, but something that will come in time. The board is an excellent candidate for a desktop replacement, as it can handle many large applications with little strain.

If you need the extra power and don’t need the GPIO or Raspberry Pi specific options, then this is a great board. But right now this is not the best single board computer it could be, but as we said earlier this would come in time. All it needs is a community to adopt it and make it their own.

Link: The Libre Computer Project “Le Potato” AML-S905X-CC is currently not on general sale, but it is expected to be in 2018. Keep an eye on https://libre.computer/ for release information.