Everyone loves Star Wars, and its robots – and their design – hold a particular fascination. When The Force Awakens hit cinemas in 2015, the realization of astromech droid BB8 set tongues wagging and brains ticking over.

Well, no: BB8 is real and works by placing a drive mechanism – complete with wheels – inside the spherical body. These wheels then “push” the ball along, while the head is typically kept in place using magnets. With the right weighting in place, it should then be possible to replicate that slightly ramshackle movement of the droid, as seen in the movies from the new trilogy.

YouTuber DIY Machines is the latest to attempt to build BB8 and has done so using an Arduino Uno-controlled motor and wheel kit, along with a motor shield. Housing the workings is a 3D printed globe, in two hemispheres, which is then painted to resemble the design of the movie-original droid. A Bluetooth receiver is also included, and there needs to be space for the rechargeable battery. Although the video above only demonstrates building the body (part 2 is expected soon), the droid’s head is, in reality, half a styrofoam ball.

You’ll find the 3D printed instructions at Thingiverse; as well as the sphere halves. This also includes the device to hold the motor, wheels, battery and Arduino in place. Presumably, this is also where the magnet will be mounted.

Fancy building one? You can see a complete step-by-step tutorial over on the project page, or you’ll find the full bill of materials via the YouTube video page, and happily, they can all be sourced via Amazon. Once you’ve got the parts, you’ll also need to download the code for your Arduino. Connecting over Bluetooth should be no problem, and you’ll soon be remote controlling your own DIY BB8 droid!

Or perhaps you already have... 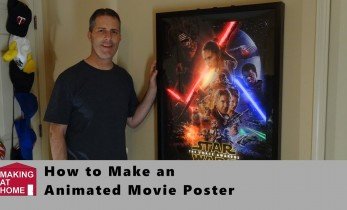