If you’ve ever tried hooking up a hard disk drive to your Raspberry Pi, you’ll be familiar with the mess it can create. Both devices need a power supply; then there’s the USB cable from the drive to the Pi. Perhaps you tried using an external HDD housing; perhaps you prefer something more bespoke, like the Western Digital WDLabs PiDrive.

Even with that solution, however, an enclosure is required.

The Raspberry Pi has considerable benefits when connected to large, reliable storage. It can run as a server, as compact as servers can get, really, capable of serving everything from multiplayer games to websites.

Bringing the idea of a Pi-based server to life with an integrated HDD is YouTube channel NODE, which sees the Raspberry Pi as a critical component of the decentralized web (in which users take back control of many of their online activities).

As NODE explains, “Single board computers have reached the point where they are both small enough, cheap enough, and powerful enough to fill this gap ... what we really need is a small, cheap, and basically plug-and-play device.” This simplicity should deal with the problems that cables, housings, and other accessories bring into the mix.

The NODE Mini Server uses a 3D printed case and makes modifications to the Raspberry Pi (a Pi 3B+ is used in the video) so that each of the ports sits at one end of the case. This makes accessing USB, HDMI, power, and the microSD slot far simpler. Perhaps the main modification to the Pi 3B+ is the removal of the first double USB slot, which is replaced with a single USB slot and a custom micro USB power socket.

With a USB port free, a custom flex cable adaptor enables a hard disk drive to be connected (there’s space in the 3D printed case where it can be slotted in) via a W25P2 USB 2.0 to SATA adapter. An HDMI extender is also utilised, while a custom microSD card adaptor plugs into the microSD slot, then runs along the length of the case to its new home.

Heat management is a consideration here, so the NODE Mini Server employs standoffs, venting, and a 25mm 5V brushless fan.

Head to the NODE website for further details (and to check on the release of the upcoming 3D printing and custom PCB files). 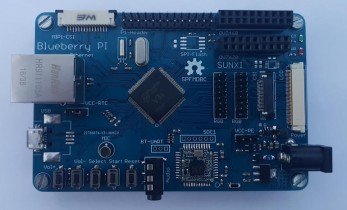