In the do-it-yourself (DIY) electronics space, there are single-board computers (SBCs) and microcontrollers. While there's some overlap, the two are ultimately different. An SBC can function as a full-fledged computer, typically with desktop capabilities and multi-tasking abilities. A microcontroller, on the other hand, runs a specific program and task, storing that program in its ROM. Although Arduino boards aren't the only microcontrollers on the market, they're certainly among the most popular. Tons of official Arduinos and Arduino clones exist. Whether you're just getting started, or an Arduino enthusiast, I suggest snagging an Arduino starter kit. While you can purchase components off-the-shelf, an Arduino kit offers a complete package of various hardware options for building projects. And for beginners, there's usually excellent documentation and a set of suggested projects. Check out the best Arduino starter kits you can buy! 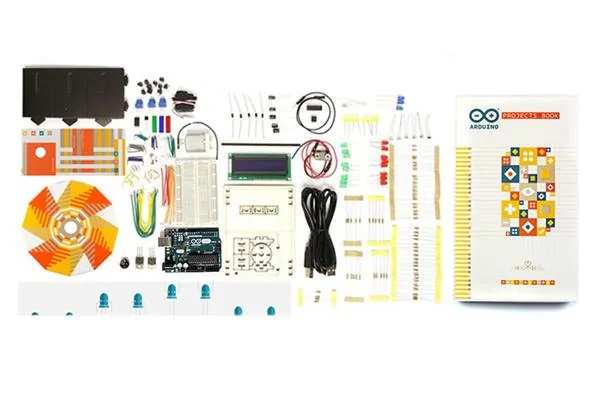 If you're looking for an Arduino starter kit, the best place to start is with official Arduino packages. The Arduino K000007 features an Arduino basics guide book with 15 starter projects. There's an Arduino UNO R3 Rev 3, USB cable, breadboard, 1.9v battery, solid core jumper wires, stranded jumper wires, a temperature sensor, tilt sensor, photoresistors, assortment of LEDs, and a slew of other hardware for creating any Arduino project you can think of. Helpfully, the beginner's booklet offers recommended projects so you can learn how the Arduino IDE (Integrated Development Environment) interacts with and controls an Arduino and its attached components. Then, once you've mastered basic projects, you can advance to envisioning your own projects. The Arduino K000007 starter kit for beginners is easily the best Arduino starter kit for most users. 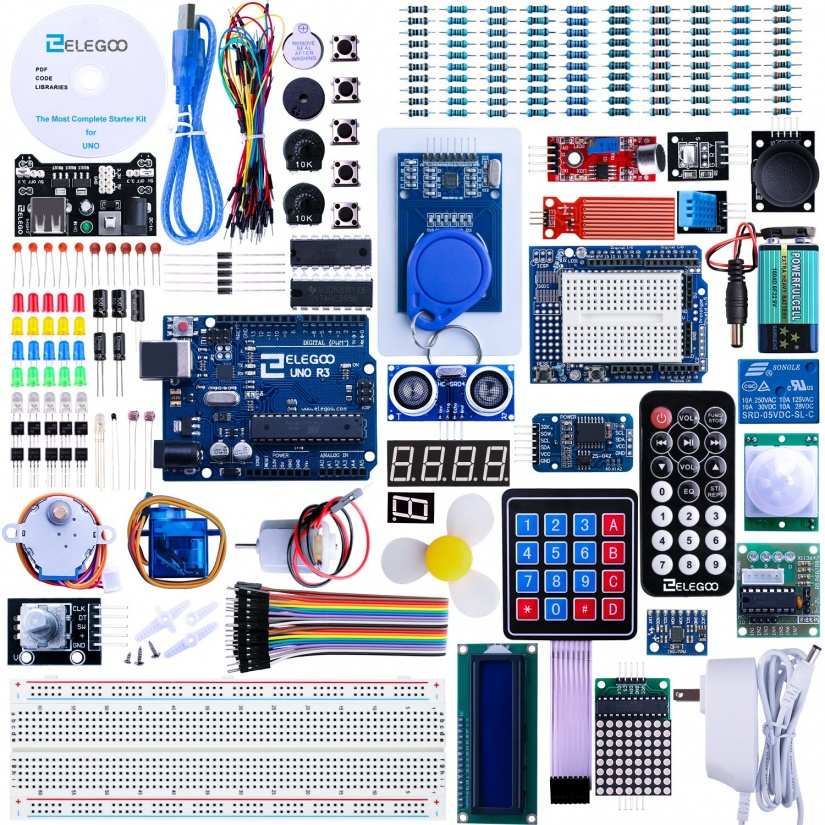 What I really appreciated about the Elegoo UNO R3 was the comprehensive lessons bundled. With over 30 project ideas that build upon the previous lesson in a logical manner, it's a fantastic option for Arduino tinkerers of all skill levels. When comparing the Arduino starter kit vs Elegoo option, both are fantastic choices. 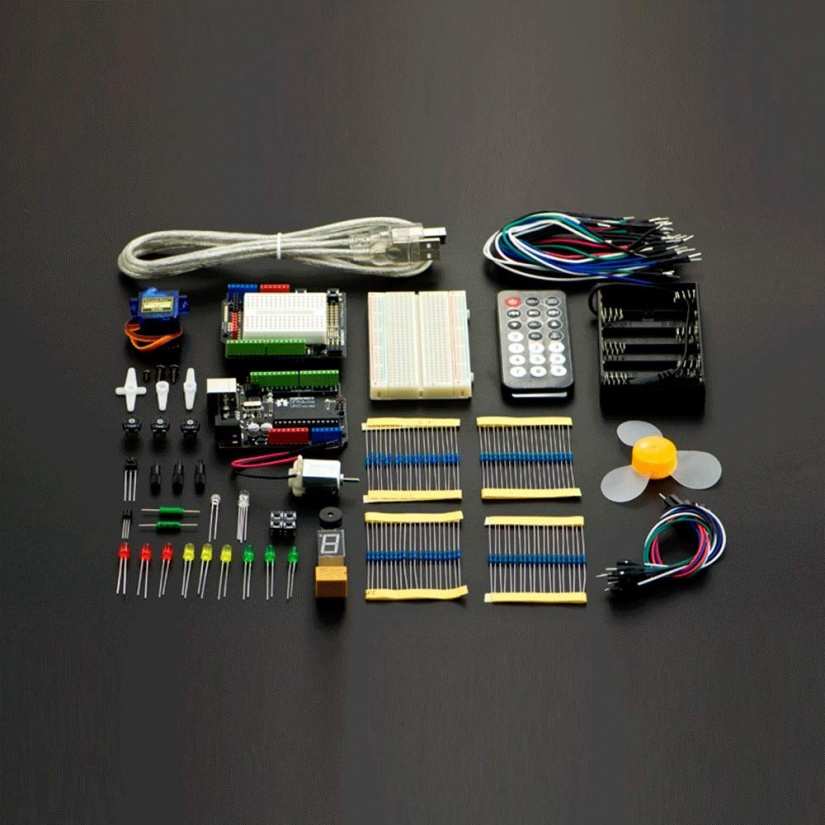 DFRobot makes some of the top maker hardware on the market. Unsurprisingly, its DFRobot starter kit for Arduino is an incredible addition to any maker space. Inside, this Arduino starter pack touts a bevy of accessories such as LEDs, wires, breadboards, and more. Since it's incredibly well-stocked and organized, finding various components is a breeze. Likewise, there's a handy PDF manual with tips on getting started and 15 Arduino projects for beginners, intermediate, and advanced users. 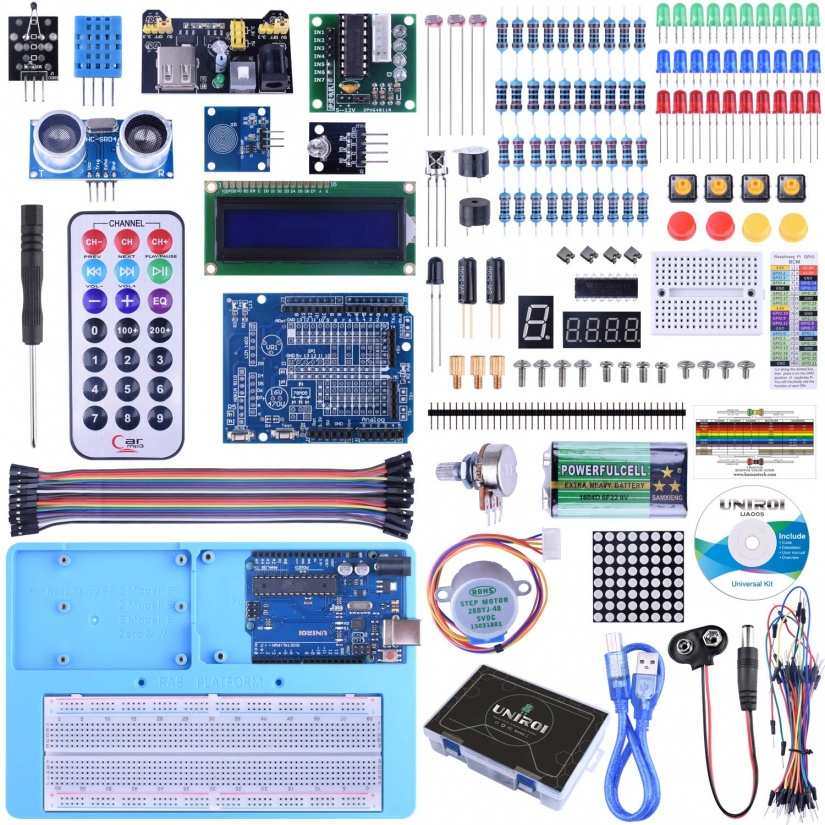 The UNIROI is an incredibly affordable Arduino kit for beginners. As per the industry standard, it's an Arduino starter kit with a book, albeit PDF rather than printed. Included in UNIROI's Arduino bundle is an Arduino R3 board, power supply, and USB cable. Plus, there are loads of components. Arduino accessories such as LEDs, breadboards, passive buzzers, a 9V battery, thermat, and a host of other items come standard. What's more, there's an included RAB holder for easily working on Arduino-based projects and portable prototyping. Overall, it's a comprehensive Arduino bundle. 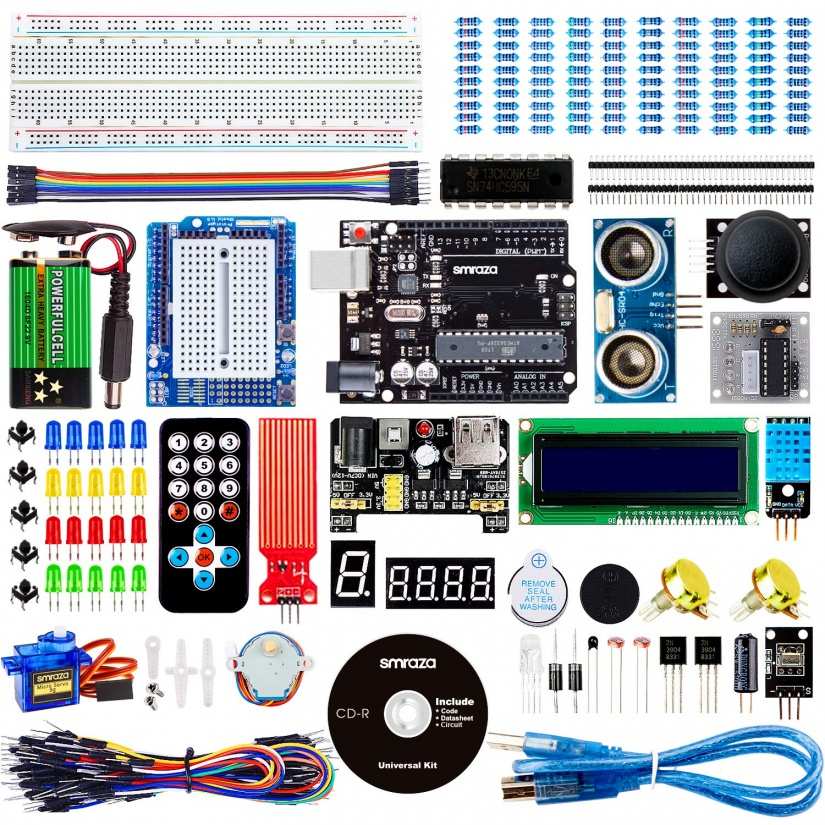 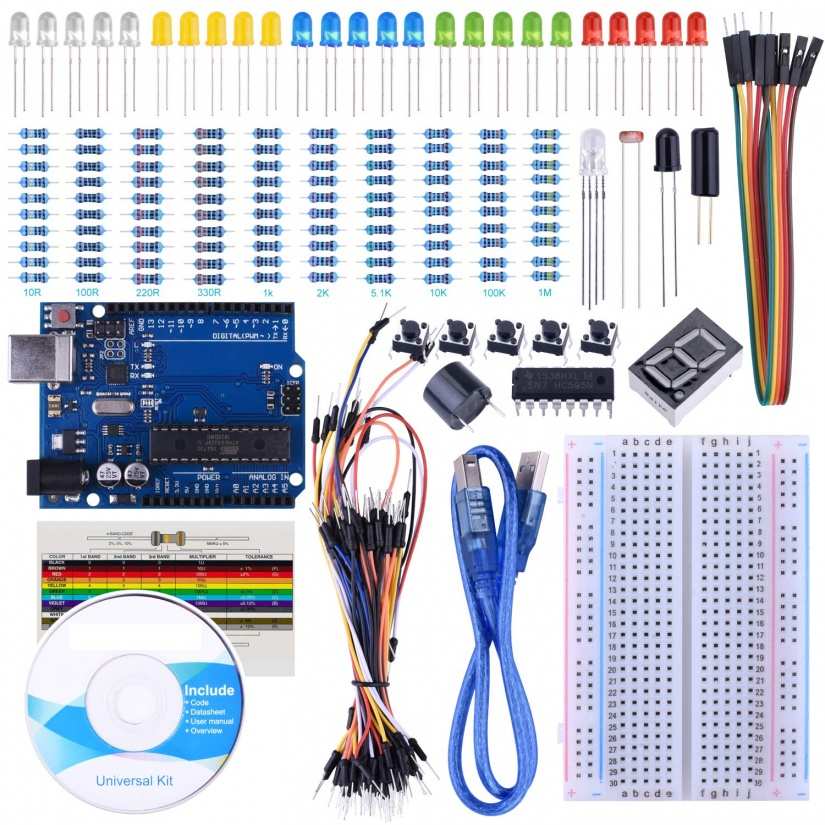 Ridiculously economical, the STARTO Arduino starter kit package an ATMega328-based microcontroller with full Arduino IDE support alongside a bevy of accessories. There are LEDs, wires, a breadboard, active buzzer, resistors, and a 1 digit 7-segment display among others. A CD features code, a user manual, and IDE. While the sheer volume of accessories might not be as large as you'll find in other Arduino starter kits, it's still impressive. And the ultra-affordability makes this a solid bet nonetheless. 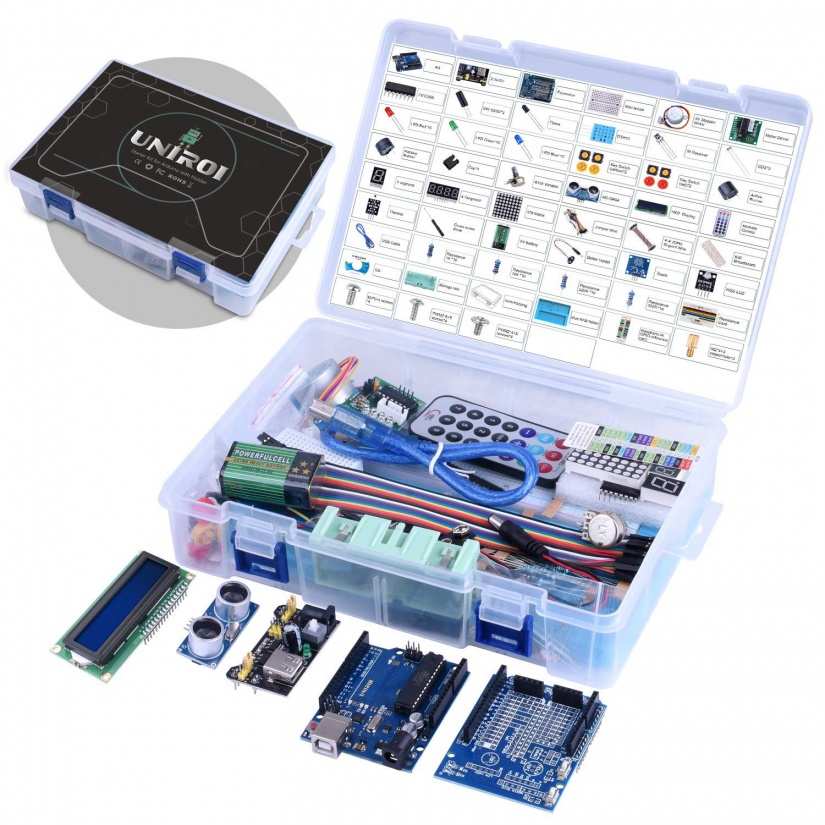 Branded the most complete ultimate starter kit for the Arduino, this well-stocked Arduino starter kit truly has it all. There are a whopping 52 different components and a RAB holder for managing your Arduino prototyping. A bundled disc contains an Arduino IDE, user manual, and a slate of project instructions with code snippets. Hardware add-ons range from servo motors to stepper motors and an LCD 1602. Jam-packed with accessories, and perfect for everyone for beginners to hardcore Arduino buffs, the Kincrea ultimate Arduino starter kit flaunts an impressive array of hardware. 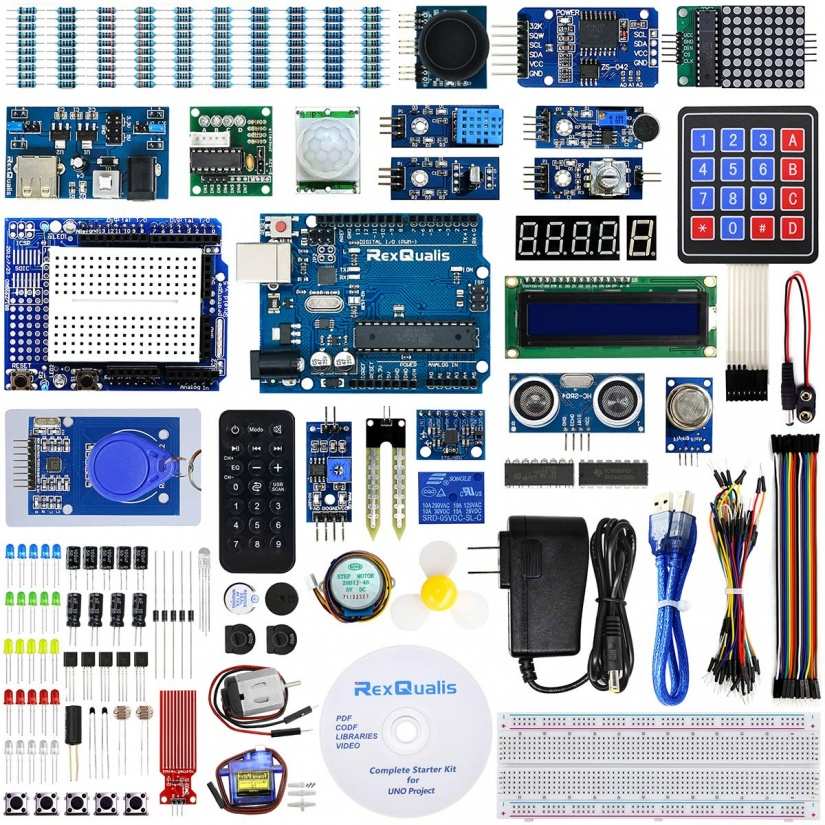 An Arduino UNO R3-based kit, the REXQualis complete starter kit features a slew of Arduino parts and pieces. Aside from an Arduino UNO R3 board, there are loads of components such as sensors. In fact, with over 200 pieces and almost 70 different Arduino add-ons, there's virtually everything here you'll need for any Arduino project. In addition to an IDE and user guide, free detailed projects come installed on the included disc. With its plethora of high-quality components, the REXQualis UNO project super starter kit is a must-buy for any Arduino hobbyist. 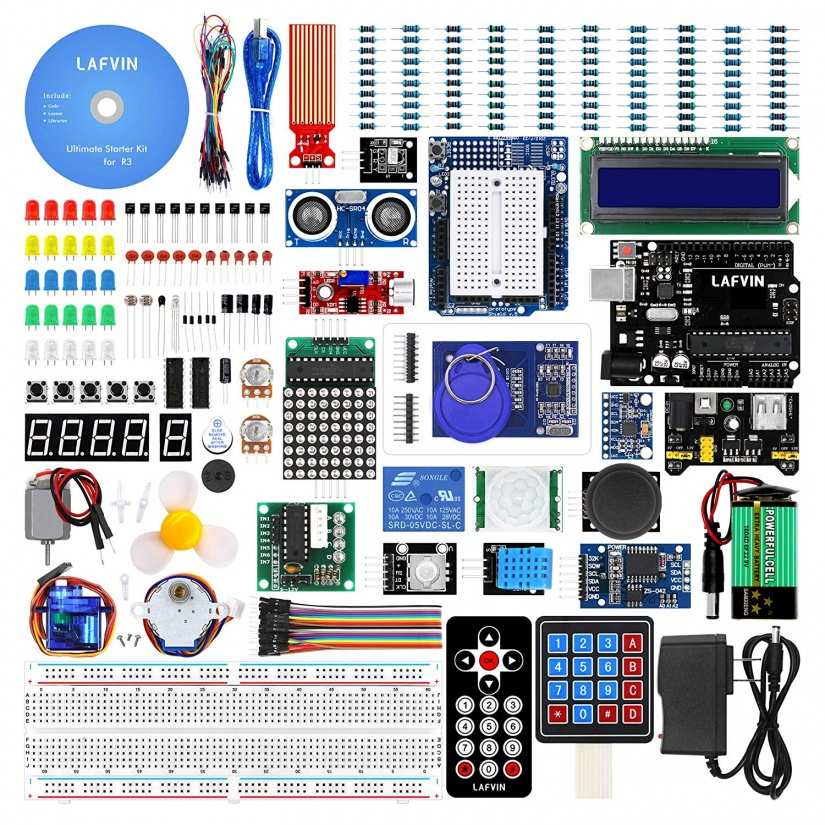 The LAFVIN ultimate starter kit with an R3 board is ideal for beginners. Since it features an Arduino UNO R3, USB cable, IDE, and suggested projects with sample code, there's everything needed to walk you through a smattering of easy-to-grasp projects. Over 30 projects range from blinking an LED to using servo motors. There are more than 200 components and 72 items. The included 1602 solderless LCD display is awesome, and there's an 8x8 LED matrix for a scrolling information display. Almost anything you could possibly need is standard.

Although many Arduino starter kits target beginners, there's a ton of value for advanced users as well. Hardcore Arduino makers will appreciate an Arduino pack's comprehensive set of parts. Although it's possible to buy pretty much any of the components included in starter kits separately, these kits often save time, and definitely money. Plus, various amenities such as hardshell cases with compartments for all components make Arduino starter kits absolutely worth it. Plus, the pre-loaded code from projects means you can cobble together a project using the project code as a foundation rather than programming from scratch. Personally, I use an Elegoo UNO R3 starter kit, but pretty much any starter kit should do just fine. The official K000007 Arduino kit is a best-bet as well.

Your turn: which Arduino starter kit are you using?