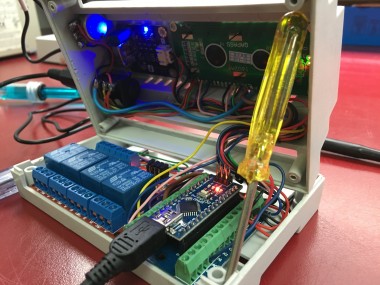 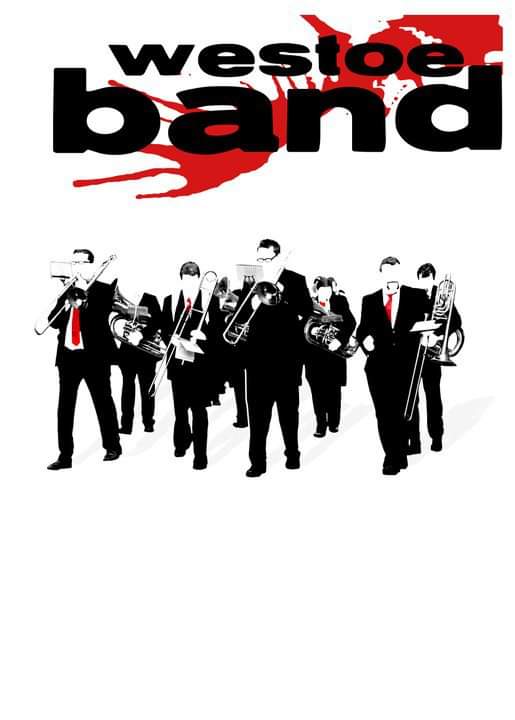 Automated aquarium monitor with Web GUI. daisychain units can control multiple tank all from the one master unit. PI/Arduino/ESP Powered

This Project is to document the progress of a joint project between myself and my good buddy Liam O'Reilly. The aim is to create an automated aquarium monitor to control and maintain several tanks, and provide feedback and manual control to the user via an easy to use interface. The project started as a College project, but we are extremely interested in taking our rough-and-ready Proof of Concept and creating a professional looking unit suitable for industrial or commercial use. 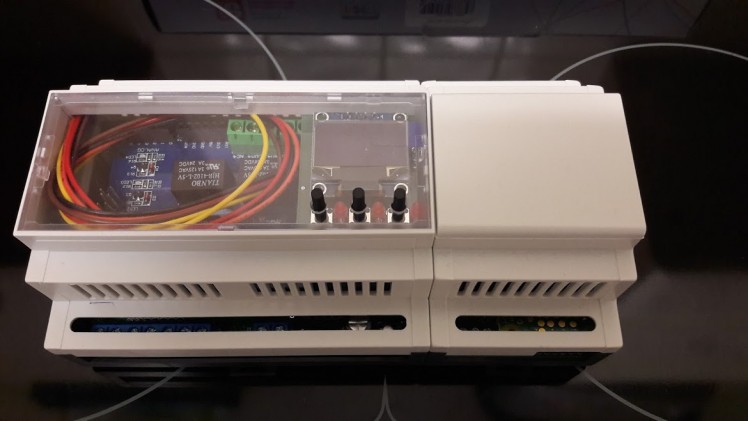 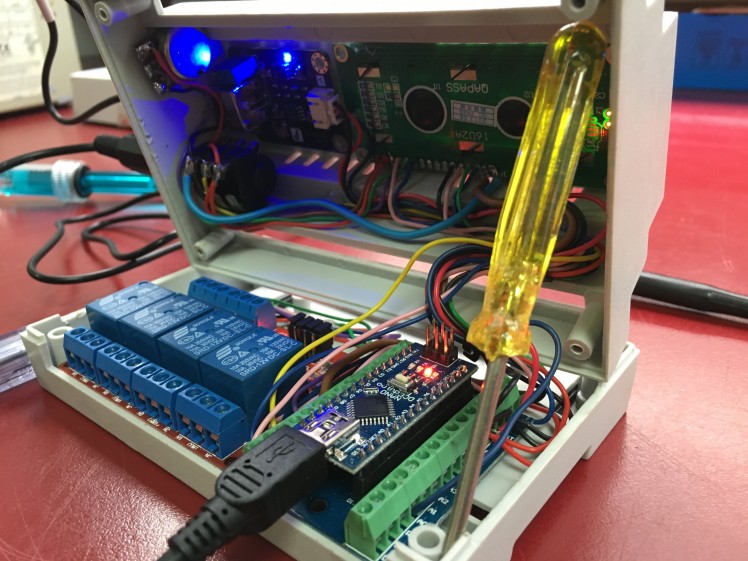 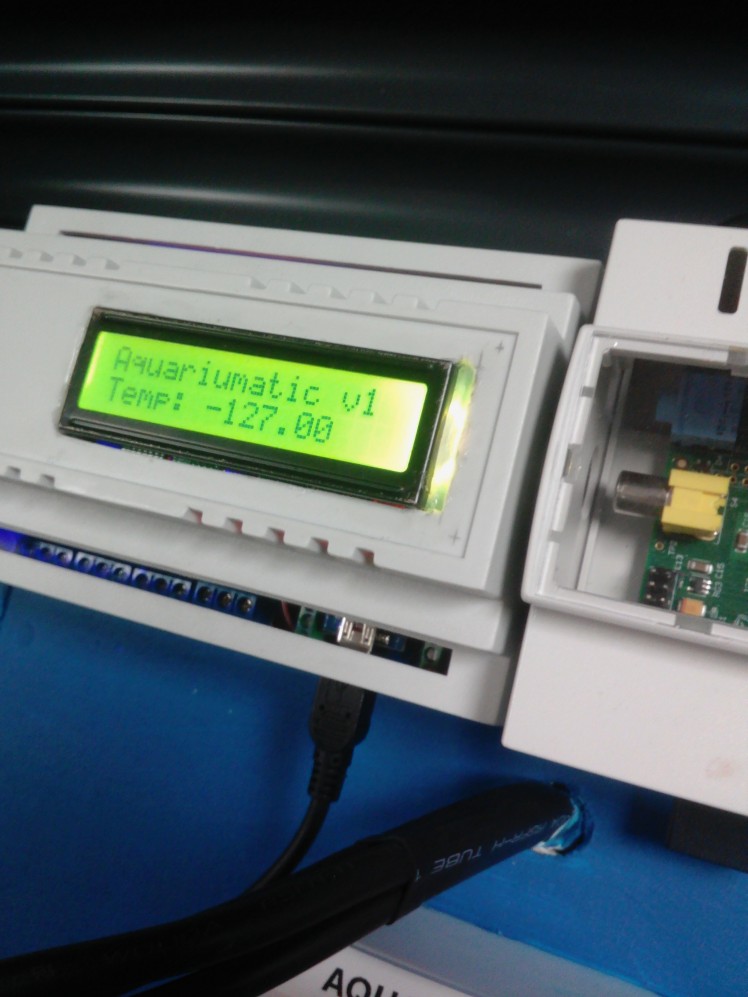 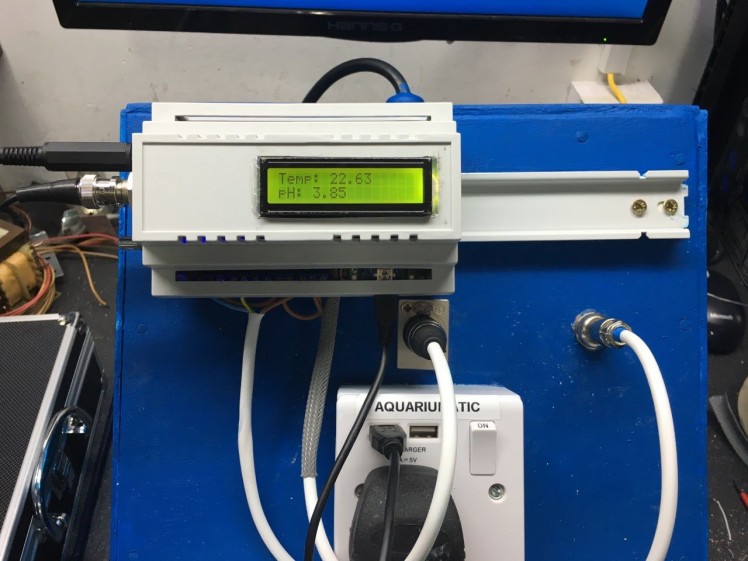 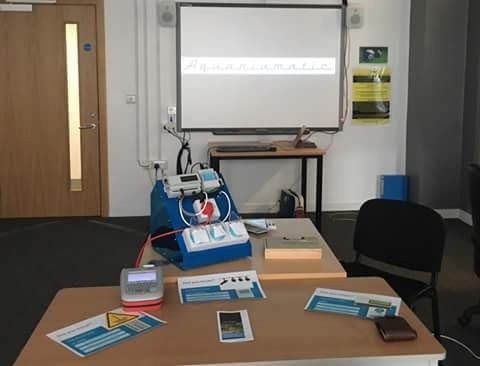 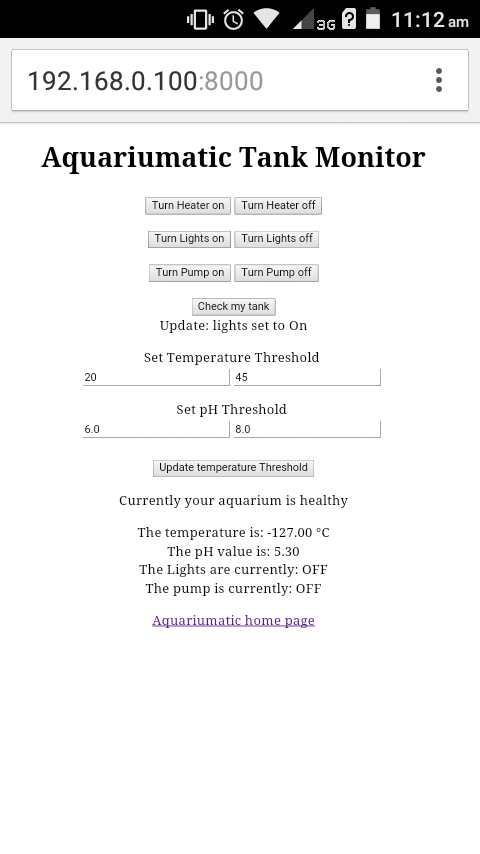 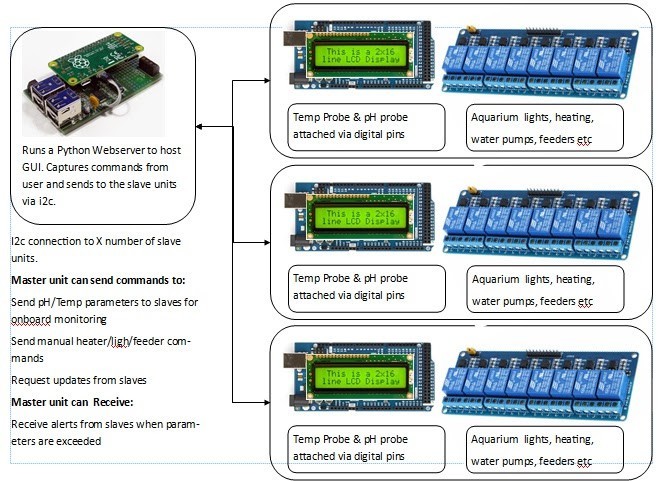 The aim was to use a Raspberry Pi as a Webserving i2c master. This would provide a user interface accessible over the network on any device, and also the ability to relay commands to multiple i2c devices.

All data collected by the Slaves would be returned to the master when requested for display on the web GUI when the page is requested. For example if the user were to access page /23 on the web interface the device would make a request to the slave configured for Tank 23.

In theory I would like the master to be able to provide a set of parameters to the slave; things such as temperature and pH thresholds, to be saved to the Arduino's EEPROM. This would allow the arduino to constantly monitor the Tank's state and respond to some any anomolies:

This would allow the user to preset configure each individual slave for the type of fish they are keeping in that tank. Ideal for a multi tank setup, or even a pet store.

While the plan has not changed, the way in which I hope to achieve the functions required has evolved following lots of trial and error and also following me picking up a great deal of practice using wifi communication.

As a result the following updates have been made to the project:

The ESP-01 has a nice small header, so will take up little real estate on any pcb designs as they materialise. This will give me a great platform to work on my new target of websocket communication with my prototypes once the chips arrive.

This is just a small update regarding a change of tact regarding communication for the Aquariumatic. 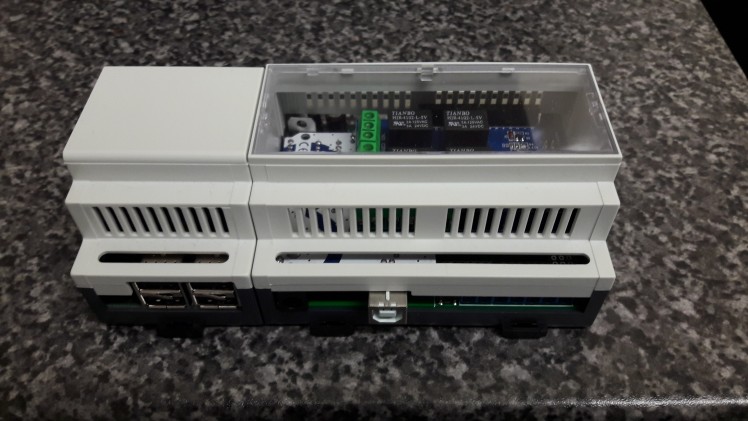 Here it is pictured alongside my Pi Zero case. I love it! I am currently testing the configurations of lcd shield, relay shield etc. I think it's looking like both Shields will be dropped and just a standard 4 channel relay module added (screws and spacers added to the Arduibox prototyping area). With regards to the screen I feel like I may end up purchasing the oled add-on module available from Hartmut to keep the device looking so clean.

So, protocol - up until this very point the plan has always been to use i2c to chain my units together; nice and easy, and addresses for 112 devices to be linked together. As a secondary form of communication the pcb was going to carry an esp8266, connected to the Nano via serial, for an additional way of getting href="https://hackaday.io/hacker/103958">@Hartmut Wendt and his awesome Arduibox comes in!

Hartmut has a range of amazing DIN rail enclosures for Raspberry Pi and Arduino available on his webshop. I was lucky enough to get sent a prototype for his Pi zero-based one, and have running a demo webserver on it ever since.

I have just ordered Hartmut's Arduino box enclosure; it takes an Arduino Zero and a shield, while still leaving space for prototyping and extra components.

I have also ordered a relay shield for arduino, and an extra lcd shield too.

I'm going to experiment with using the lcd shield in the case and trying to fit a 4 channel relay module in the case too.

If that doesn't work I will switch to using the relay shield and an alternative screen. Hartmut has just released a fantastic i2c OLED module board that can be added to any of his enclosures, so I will look to order one of those and explore how to use it using a software i2c on the arduino (keeping the main i2c bus free for just master and slave unit addresses).

This is just a note to myself really :-)

In order to simplify the chaining of slaves to master I wanted to keep the i2c bus free of any devices other than the slave units (the arduino nanos).

Using i2c displays on the same bus would complicate the process; each slave having two i2c addresses, the screens all carrying the same address etc.

The ideal solution would be to use a library such as this one to create a second bus, just for the screen. this second bus cpild also be used for any further i2c devices added to the slave unit if necessary.

I've been having a think about what kind of layout I'd like for my components to have on a PCB if I ever learn how to create them.

The plan is to have the Nano and Pi's USB ports available via the top/side for serial access/programming etc, with the relay and sensor outputs (and power) ins and outs via the bottom:

40pin Female header to allow Pi to mount over the top of the the Nano; if the Nano is mounted directly to the PCB there should be clearance to do so.

The only connections for the Pi are to 5v, GND, and i2c Bus. Full header only really required for a sturdy mount, so to speak.

Potentially a four channel Relay board mounted, or 4 individual relays or fets. TBC

Female headers for mounting an ESP8266.

breakout pins for 5v, Ground, SDA and SDL. For connecting LCD Screen and other modules.

Header for Power, GND and 1-wire data pin (A1?). To be used with temp sensors.

a mounting point for the standard pH sensor breakout boards with the BNC connectors.

Power, Ground and data (A0) pins to be made available for this module.

These are to insert spacers for the LCD screen.

Next step - to actually take some measurements and see if this will work!

Also need to draw up a proper pin connection list too.

In addition to the rest of the ideas I have for communication I want to add one more thing; a flexible software serial header.

This is to serve as an extra port for communication and control of a slave unit's Nano. This port will mirror everything sent monitored in Nano's code. this can be used in severbal ways, such as:

USB serial cable - for streaming data to a serial window on a PC/Laptop serial monitor, and for manually updating thresholds.

With an ESP8266 module - an ESP module could be used in many ways; to host a basic standalone webserver in the bounce of a master unit, to allow wireless comms as the methods above, or even to stream data to IoT sites such as thingspeak :-)

i2c is going to be a big part of this project.

Each device will be have the means to monitor a tank; a pH sensor, temperature sensors, relays to control lights, heat and pumps, an lcd screen for displaying tank status, and anew arduino nano to coordinate it all.

In the instance of the master unit it will also have a Pi Zero to host the Webserver and request values from the Nano via i2c to display on that tank's page.

One thing I would love to do is daisy chain several slave devices to one 'master' unit; the Raspberry Pi in the master unit could request status updates from each of the attached slave Nanos for display whenever that tank's Web page is loaded. the Pi could also send commands to the slaves to put ad hoc messages on the screen, or update the thresholds for the monitoring of pH and temperature (thresholds being stored on the Nano's Eprom).

One thing I would like to explore is using a 'software i2c' on the arduino. this would allow the arduino to control the lcd display on its own i2c bus and leave the main, 'proper' i2c for Pi/Arduino communication.