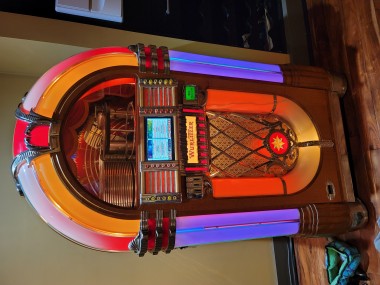 As a pre-war Jukebox and a family heirloom I was in a peculiar spot. Have a jukebox with music I don't care for and will never use, or sell it for a digital jukebox with 1/100th the character and sentimental value. Pi provided a solution to combine the digital age with a piece of classic Americana

My partner is a very lucky lady to have been the recipient of an all original pre-war Wurlitzer 1015.  It was a gift from her mother and has a great deal of sentimental value to our family.  Only issue is it plays 78RPM records, an all but non-existent format, having gone the way of the dodo to 45's and 33's.  We both love our music and really wanted to breath some new life into the beautiful piece, but also wanted something more than a 400lb paperweight in the living room.

We hummed and hawed over whether it should be sold to finance a musical statement piece we could use, or to simply accept we'd eventually throw it in the basement never to be used.  After perusing some digital examples and recreations I just couldn't bring myself to part with the character of this jukebox, the age the origin... It was something I couldn't just buy.  Here it is in all its old, oxidized, heavy glory 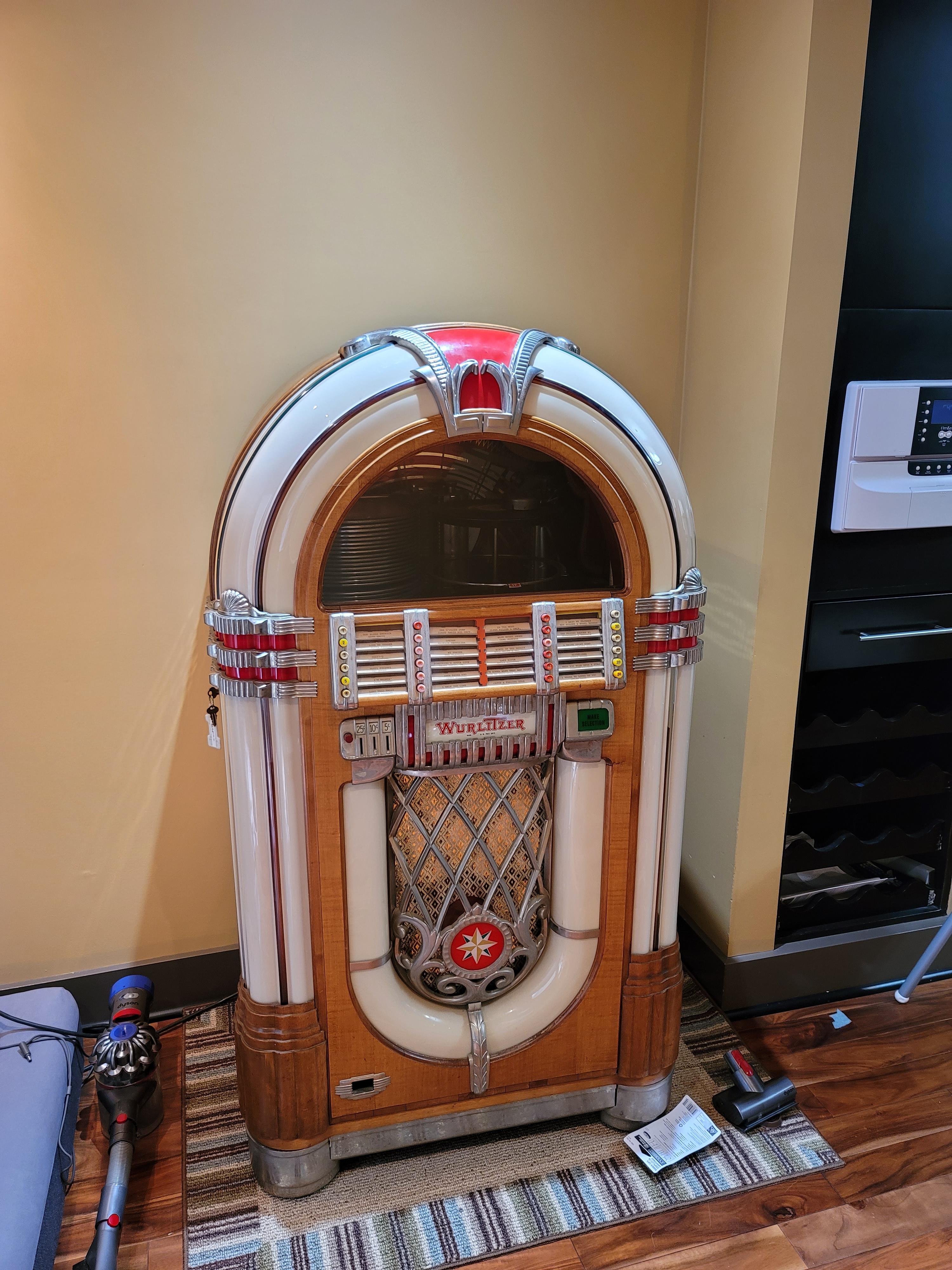 How could you not love that?  But as it sat there I started thinking, I bet I can rig this up to spin those 78s, play MP3s and give off that classic rich Wurlizter tube sound.  Okay I maybe got a bit ahead of myself, first things first taking care of that oxidation on all the nickel. 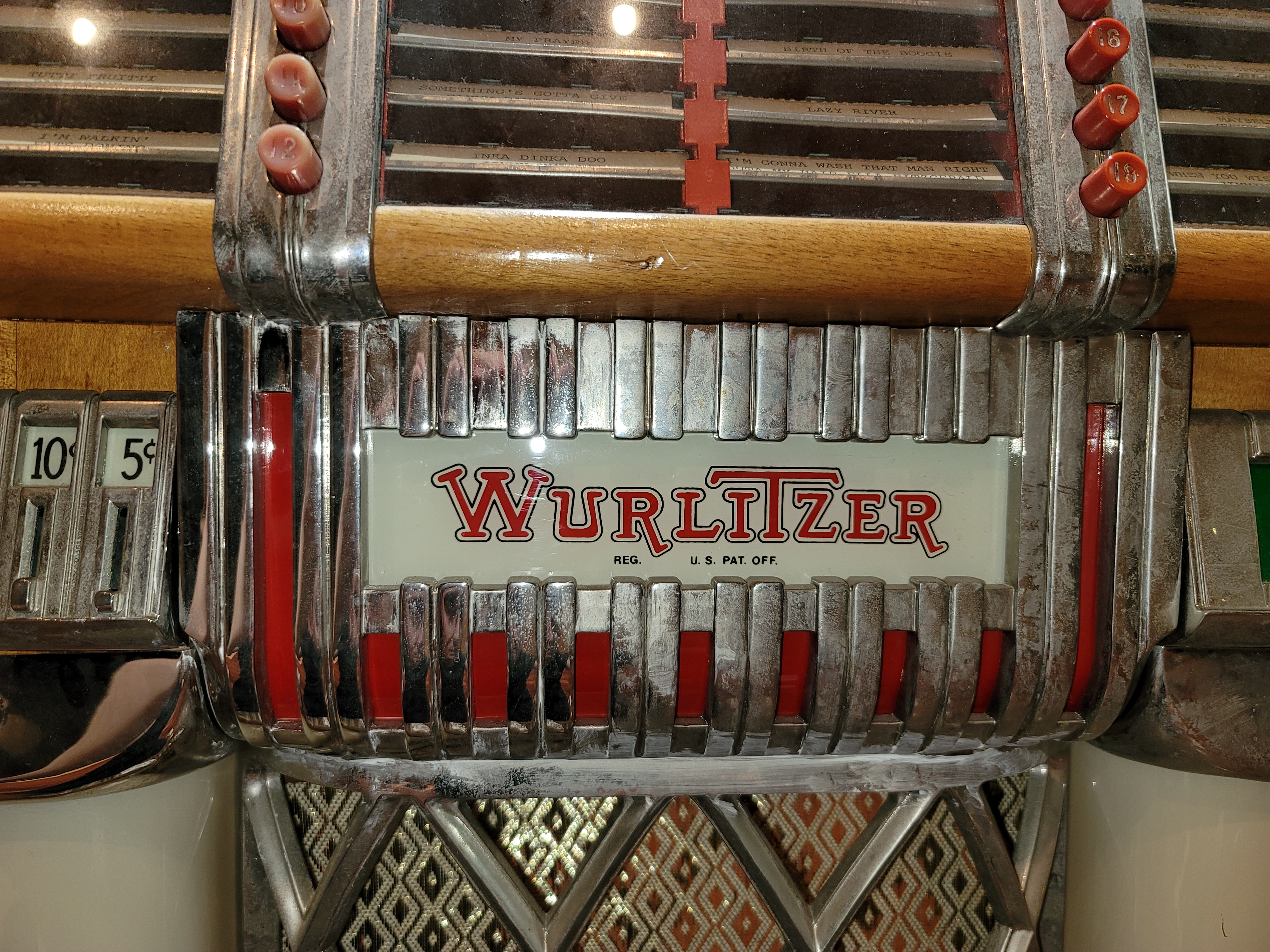 The small section on the left is the result of about 45 mins of serious elbow grease and polishing.  I knew I had hours and hours of this left to go and unfortunately did not take many pictures.  But all the nickel on this Jukebox is now darn near mirror finish.  All in all I'd say at least 15+ hours of cleaning alone.

Okay now for the actual electromaker part... After staring at that middle selection panel for about 5 hours I thought to myself, "well that looks awfully close to a 7" space, wonder if I could fit a screen in there?"  Turns out my spatial recognition is pretty sharp still. 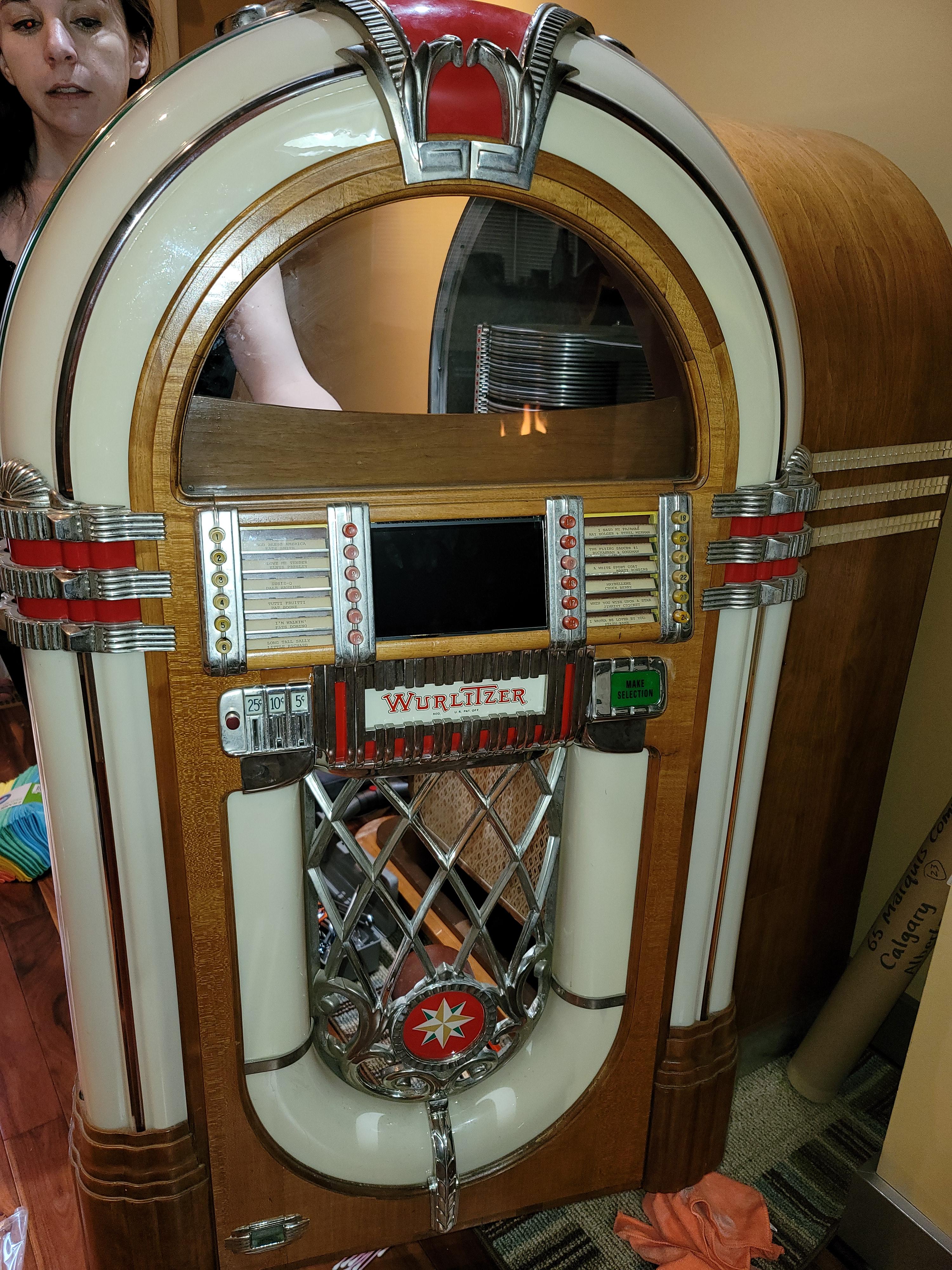 And so the decision was made to retrofit a Pi and digital system into the Wurlitzer.  I won't bore you with all the mechanical effort that went into getting the dang Jukebox to actually work again, but it does.  That was more of a personal goal of mine than it was to make anything useful.

The most complicated physical part of this build was actually getting the screen to fit amidst all the original electrical I had just put back in, so I had to make a ribbon HDMI and custom order a small right angle USB.  After that when I went to seat the screen, I realized the top standoffs didn't clear the frame portion so they had to get sawed off.  Here it is after many curse words and failed attempts 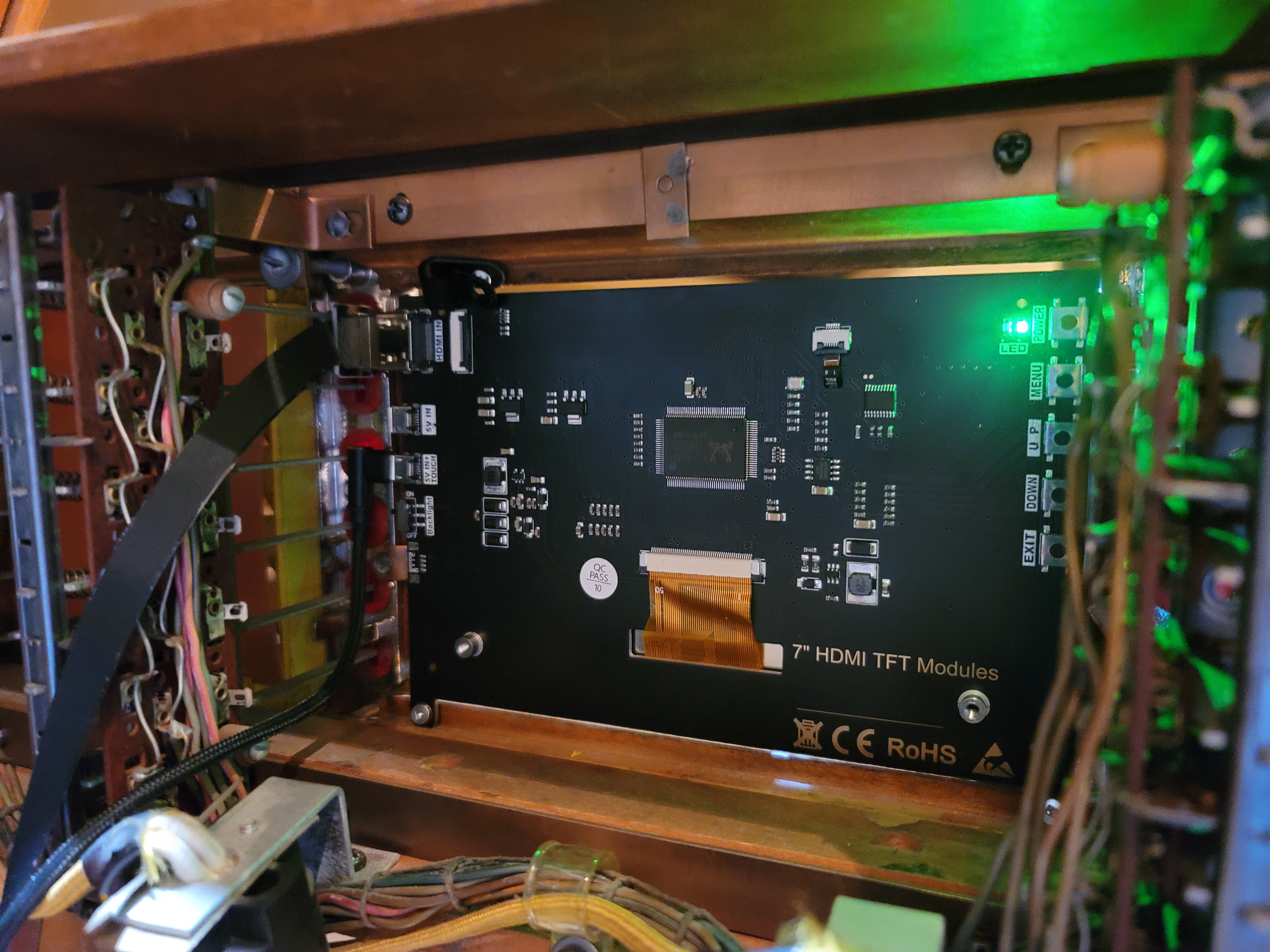 Now that I had the screen in, I needed a skin that wouldn't look ridiculous on the backdrop of a pre-war piece of Americana.  The screen is 75 years younger than every other part in this jukebox and blending the 2 would be important to preserve some of the charm.  I settled on Fruitbox for the Pi as the pre-loaded skins are wonderful to begin with, and dead easy to customize.  After some fiddling, I think I managed to blend in a 7" touchscreen to a 1946 Jukebox pretty well. 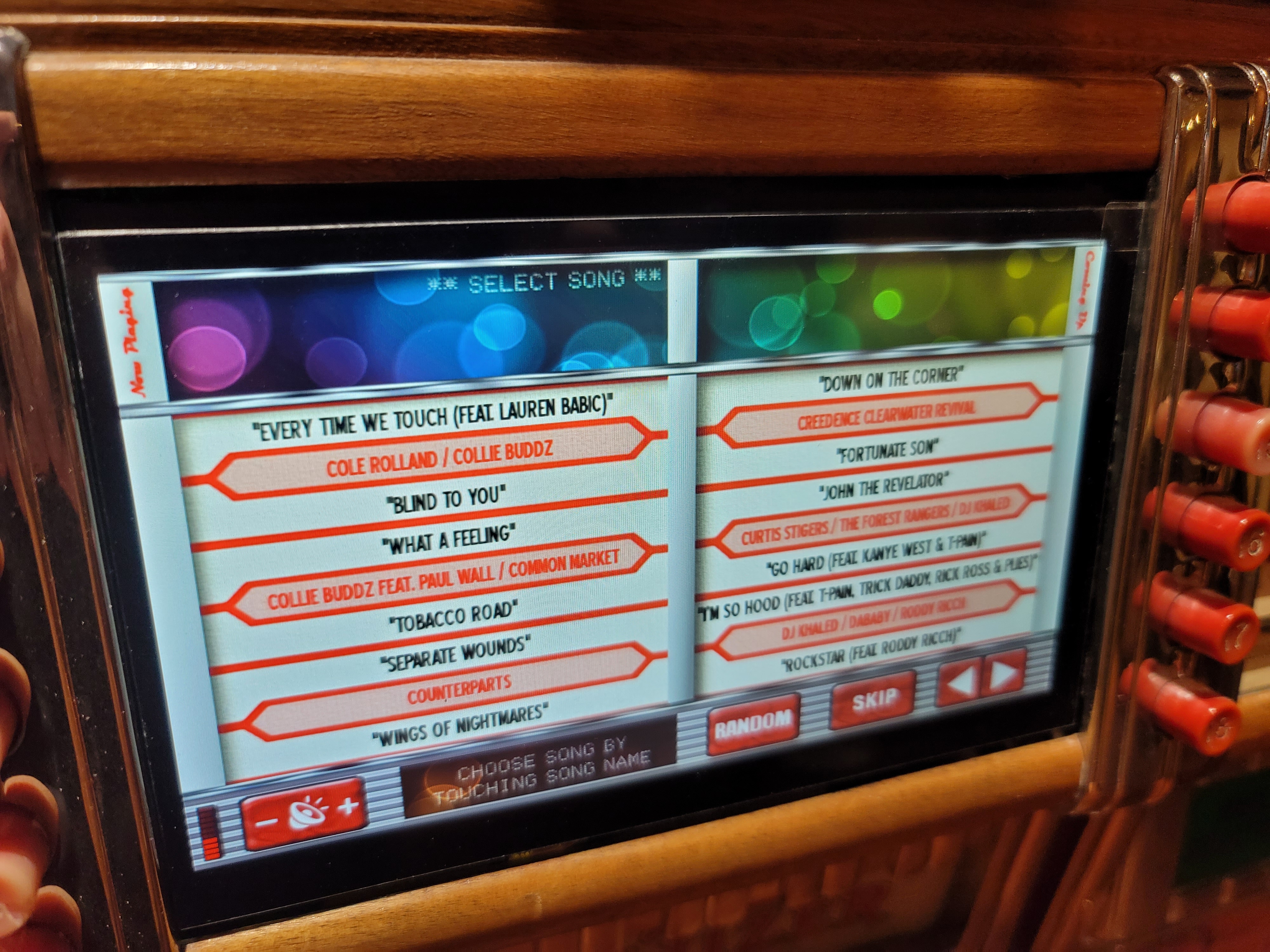 The original jukebox selector buttons are indeed hooked up to a USB encoder, but because there was not a navigation panel on the Wurlitzer 1015, having numerical buttons to navigate really was cumbersome and unintuitive so I scrapped it for the final build.

Next up was to restore than amp and speaker which I really cant explain well because I know next to nothing about any of it besides how to do it.  So here are some pictures of the amp and speaker 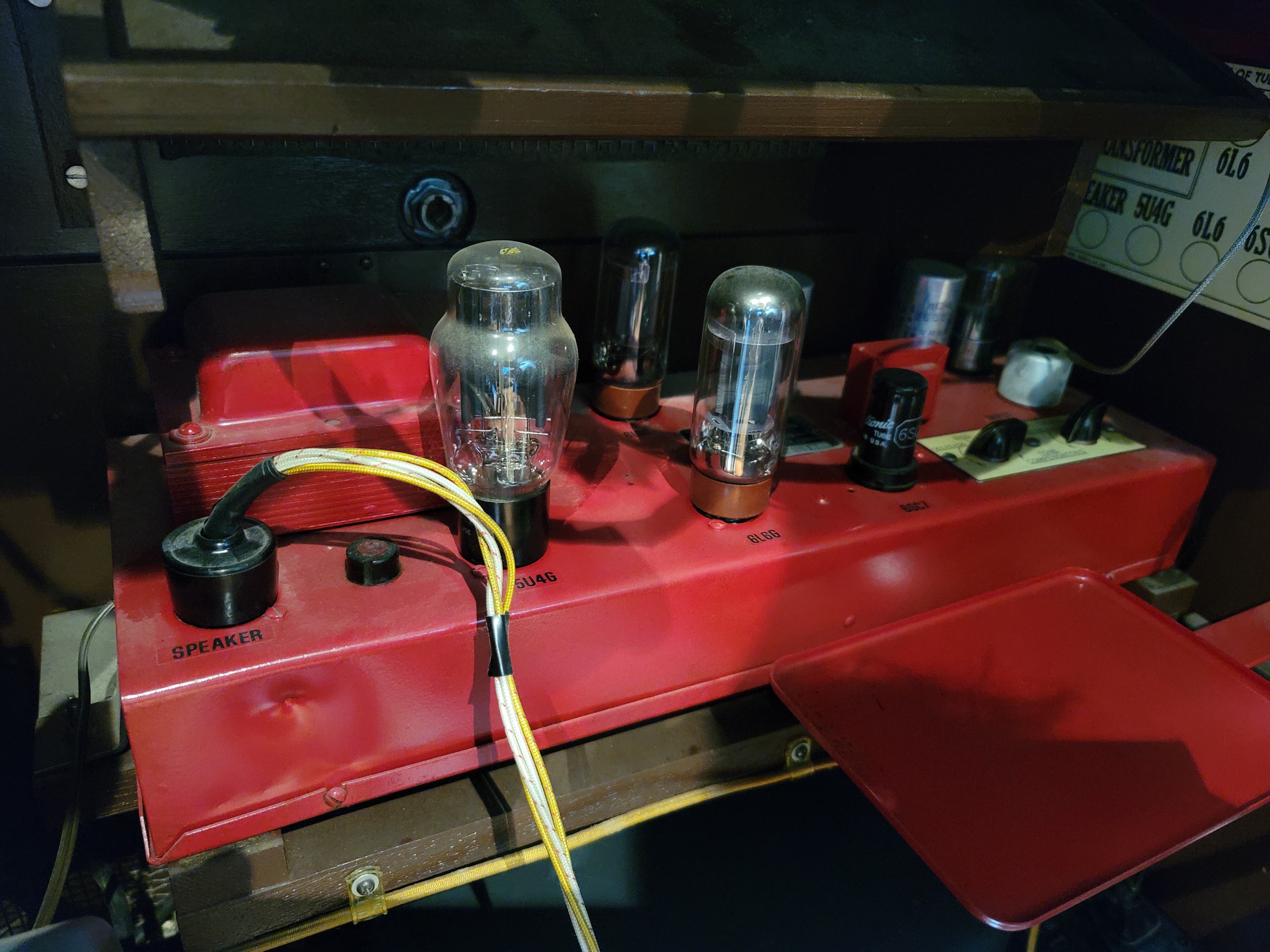 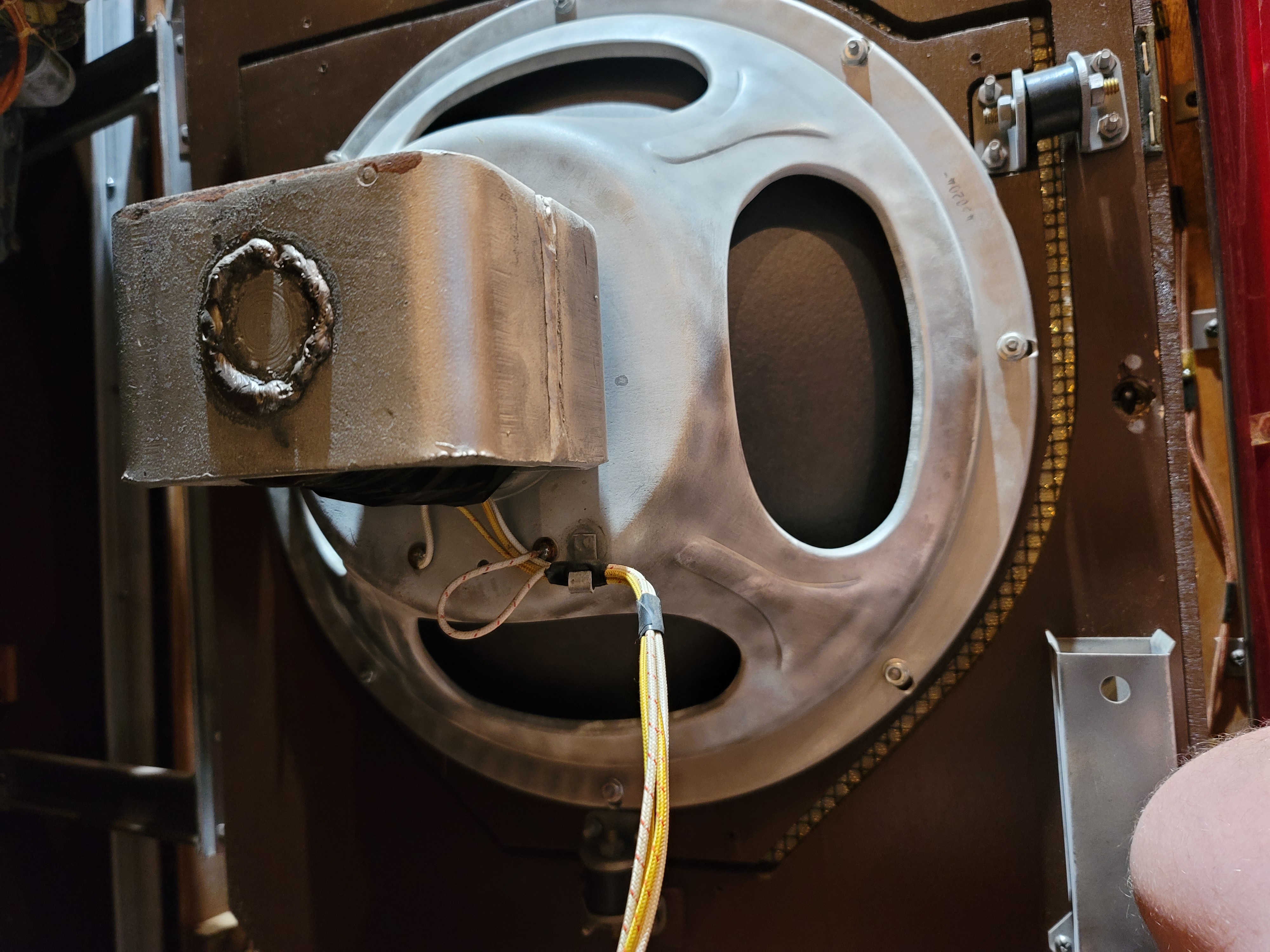 After finding some replacement tubes, a little bit of electrical tape and a lot of shoddy workmanship I did manage to get it making sound again.  At this point I could hardly wait, so slapped it all back together and...

Pardon the music taste, but now you might see why 78s weren't gonna cut it.  I still have some sloppy cabling to clean of and a custom frame to fill in the small gaps around the screen, but we've been rocking nonstop so far and couldn't be happier with our decision.