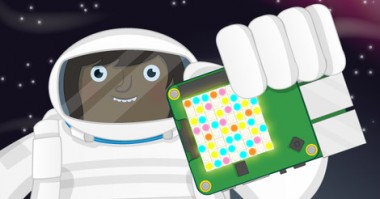 Create amazing random sparkles with your Sense HAT. In doing so, you will learn how to choose random positions on the Sense HAT’s LED display as well as random colours to light up the LEDs.

If you do not have a Raspberry Pi, you can create the project using:

If you’re using a Raspberry Pi, you will need the latest version of Raspbian, which already includes the following software packages:

If for any reason you need to install a package manually, follow these instructions:

Install a software package on the Raspberry Pi

Your Raspberry Pi will need to be online to install packages. Before installing a package, update and upgrade Raspbian, your Raspberry Pi’s operating system.

Type this command into a terminal window to install the Sense HAT package:

Connect to your Sense HAT

If you have a Sense HAT, attach it to your Raspberry Pi.

Before attaching any HAT to your Raspberry Pi, ensure that the Pi is shut down. 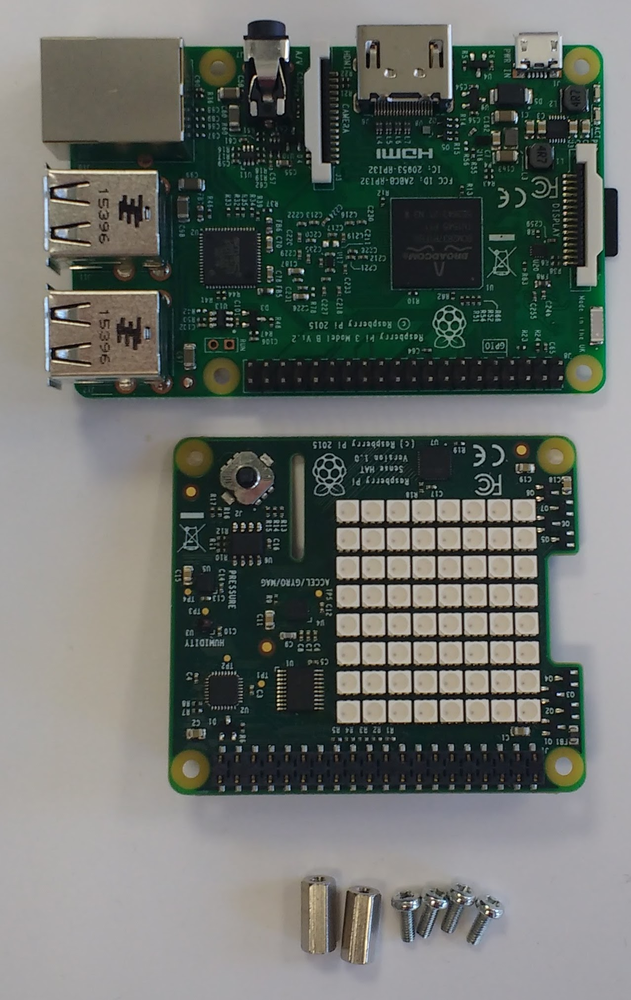 Note: the above step is optional — you do not have to attach the standoffs to the Sense HAT for it to work.

Note: using a metal stand-off next to the Raspberry Pi 3’s wireless antenna will degrade its performance and range. Either leave out this stand-off, or use nylon stand-offs and nylon screws instead. 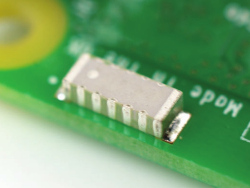 Pro tip: be careful when taking off the Sense HAT, as the 40-pin black header tends to get stuck.

If you don’t have access to a Sense HAT, you can use the emulator.

There is an online emulator you can use in your browser to write and test code for the Sense HAT. 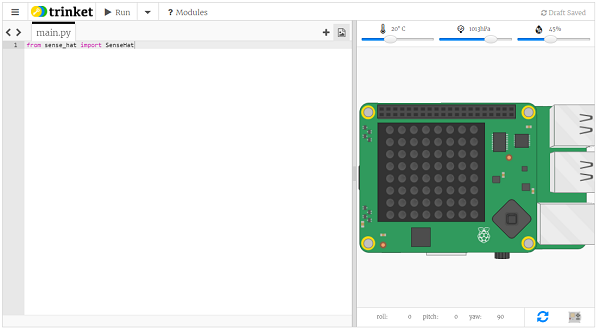 If you are using a Raspberry Pi, there is a Sense HAT emulator included in the Raspbian operating system. 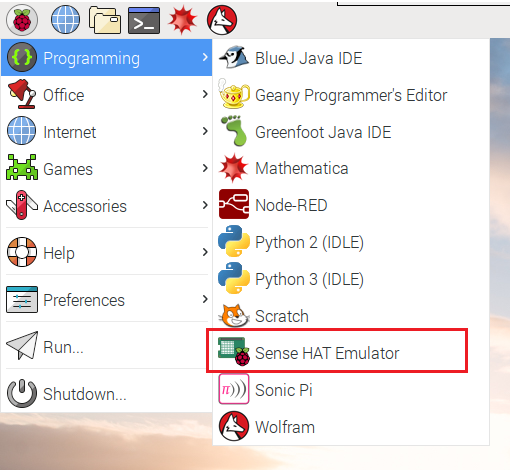 If you later want to run your code on a real Sense HAT, just change the import line as shown below. All other code can remain exactly the same.

First, we’ll think up some random numbers and use the set_pixel function to place a random colour on a random location on the Sense HAT display.

IDLE is Python’s Integrated Development Environment, which you can use to write and run code.

To open IDLE, go to the menu and choose  Programming.

You should see two versions of IDLE - make sure you click on the one that says . 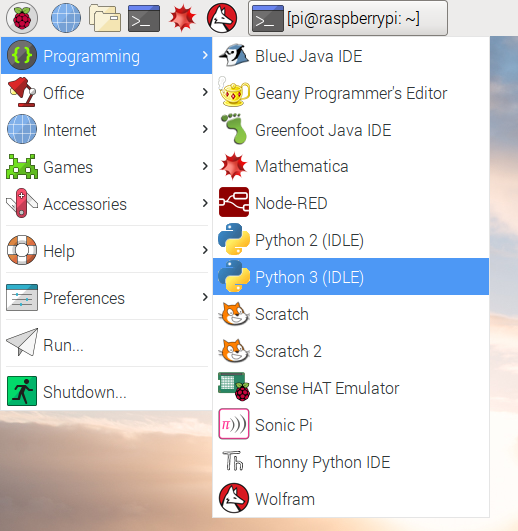 To create a new file in IDLE, you can click on File and then New File in IDLE’s menu bar.This will open a second window in which you can write your code. 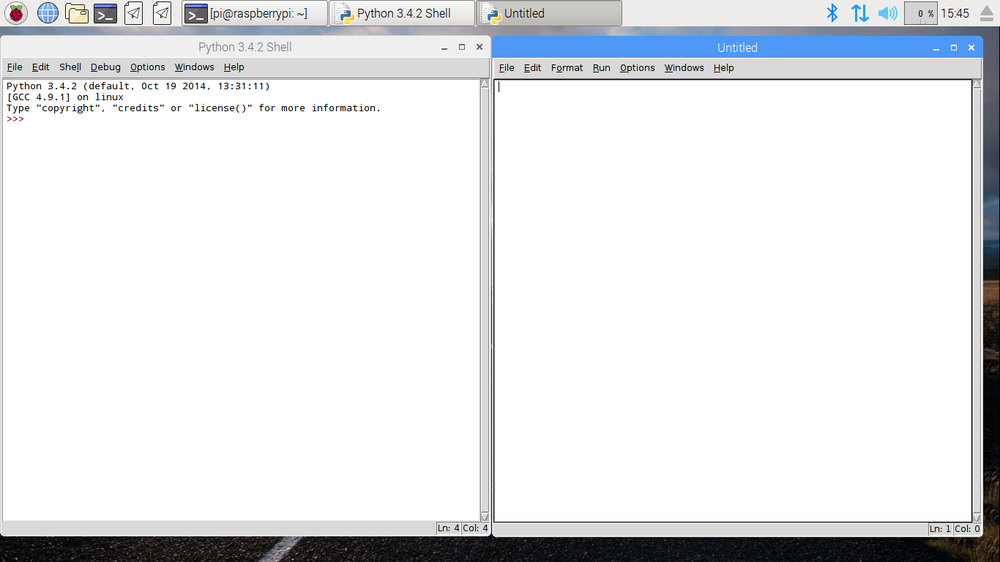 We will then define x and y, to choose which pixel on the Sense HAT will light.

Creating a variable in Python

A variable allows you to store data within a program. Variables have a name and a value. This variable has the name animal and the value cat:

This variable has the name score and the value 30:

To create a variable, give it a name and set it equal to a value. The name of the variable always goes on the left, so this code is wrong:

# This code is wrong

Note: the collapsible directions below use a different filename than yours, and uses Trinket instead of IDLE.

Setting a single pixel on the Sense HAT 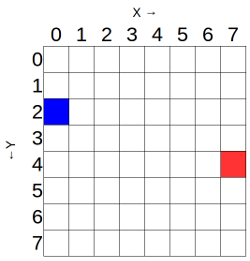 The grid above corresponds with the Raspberry Pi when it is this way around: 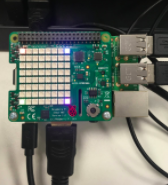 Let try out this example for setting a different colour in each corner of the Sense HAT’s LED matrix. You will need to use the set_pixel command multiple times in your code, like this:

The set_pixel method takes data in the following order:

To define your set_pixel method, plug the names of your variables into the question marks in this line of code, in the right order: x coordinate, y coordinate, red, green, blue.

View the hint below if you are stuck.

Here is how your finished code should look — you will probably have chosen different numbers: 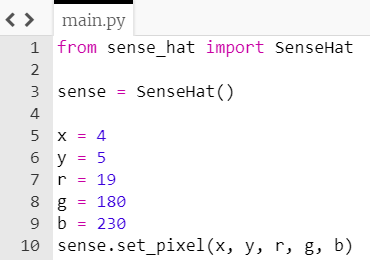 So far you picked your own random numbers, but you can let the computer choose them instead by using the random module.

One of the standard modules in Python is the random module. You can use it to create pseudo-random numbers in your code.

You can generate random integers between two values using the randint function. For example, the following line of code will produce a random integer between 0 and 10 (inclusive).

If you want a random floating-point number (also called float), you can use the uniform function. For example, the following line of code will produce a random float that’s equal to or greater than 0, but less than 10.

If you want to choose a random item from a list, you can use the choice function.

If you have the sense.clear() line in your code, you will need to remove it. Otherwise, every time the program is re-run, the display will be cleared and your previous pixel will disappear. 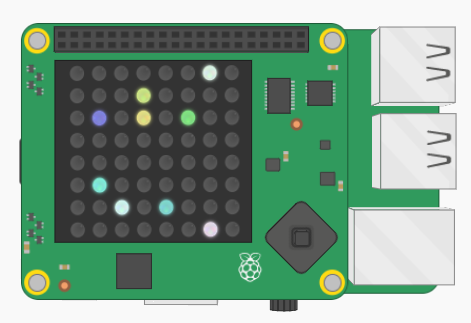 Rather than running your program over and over by pressing F5, you can add a loop so that it will keep running by itself.

While True loop in Python

The purpose of a while loop is to repeat code over and over while a condition is True.

This is why while loops are sometimes referred to as condition-controlled loops.

Note: The while line states the loop condition. The print line of code below it is slightly further to the right. This is called indentation - the line is indented to show that it is inside the loop. Any code inside the loop will be repeated.

An infinite loop is useful in situations where you want to perform the same actions over and over again, for example checking the value of a sensor. An infinite loop like this will continue to run forever meaning that any lines of code written after the loop will never happen. This is known as blocking - whereby a program blocks the execution of any other code.

You can use the sleep function to temporarily pause your Python program.

You can pause for fractions of a second as well.