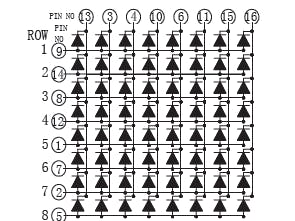 I use 788bs, a common anode 8x8 led matrix Modules for this project. Learn how to identify matrix pinout, how to interface with Arduino.

There are several types of led matrix displays available in the market. It also comes with Arduino kits. We can understand it in size and types, e.g. 5x7, 8x8, common anode, and common cathode type. 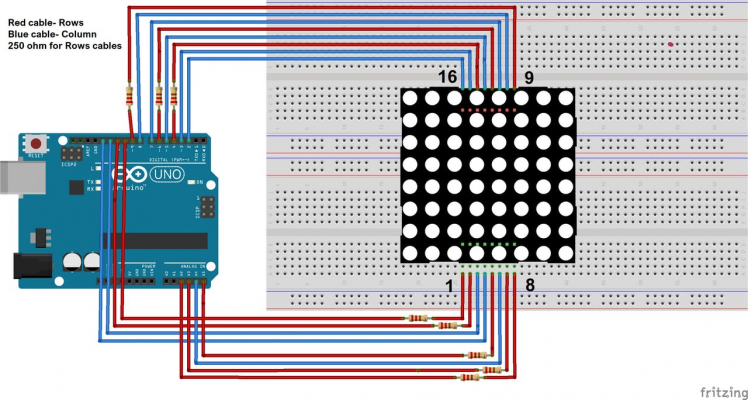 But in this article, I will discuss 788bs as a common anode 8x8 red color matrix Modules. We use it in many electronics displaying items, e.g. electronics clocks. also for moving message displays, displaying games, etc.

We use a dot matrix display with an Arduino UNO board directly, sometimes in projects. But for some projects, we use a max7219 chip or 74hc595 for dot matrix driver as required in our projects. 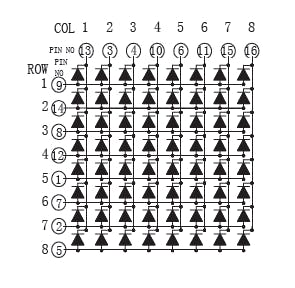 The dot-matrix modules most of the time comes in red led. It is easy to attach with an Arduino board as compared to an RGB led display.

At the upper side From Pin 9 (Row-1) to Pin 16 (column-1) located. But a newbie always confuses and starts from zero, because we know the picture/diagram. often we get from some source, also we have to sort out which one +VE and -VE. might be an expert can understand from common cathode/anode type.

But my concern about the person has a basic knowledge of electronics. Who try to make their own initial display projects like a clock or some more.

Ok let’s start if we have an 8x8 dot matrix, And how do we know where pin 1 is? As in IC Chips near Pin 1, a dot mentioned at IC/Microcontroller Chip. But here, how do we know?

Pins Starts at knob side 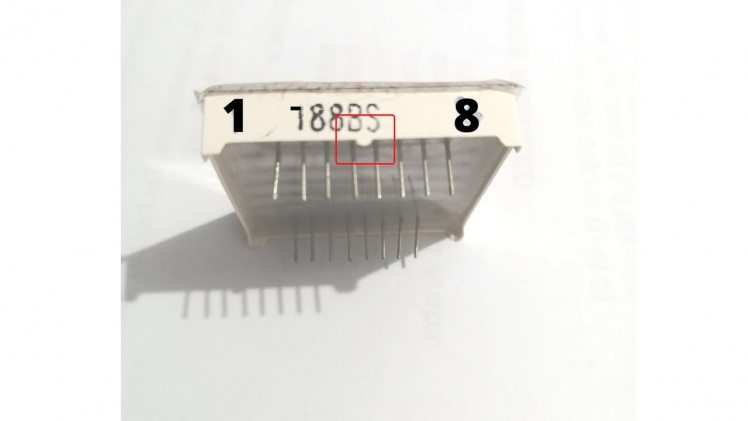 Pins Starts at knob side

At the led matrix module, the manufacturer writes the tag or mark at pin 1 side, as shown in the figure. We definitely find it. And also a curve mentioned at pin number 1 side. 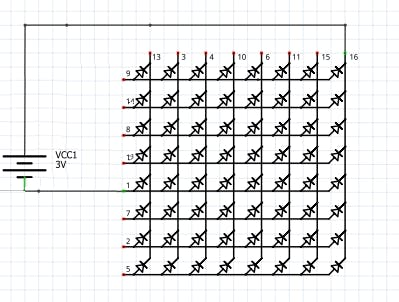 The testing power supply should be 1.5V DC required. So the only one battery cell enough or uses one 130 ohm resistance in series at a positive/negative side. 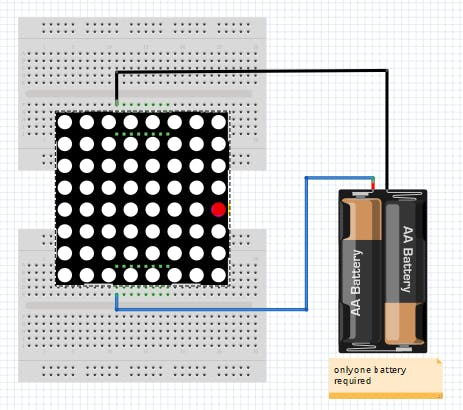 After that attached led to the power supply. We found that the 8th column and 5th rows led become ON as Connection shown in the figure. How to connect the battery cell with a matrix display. 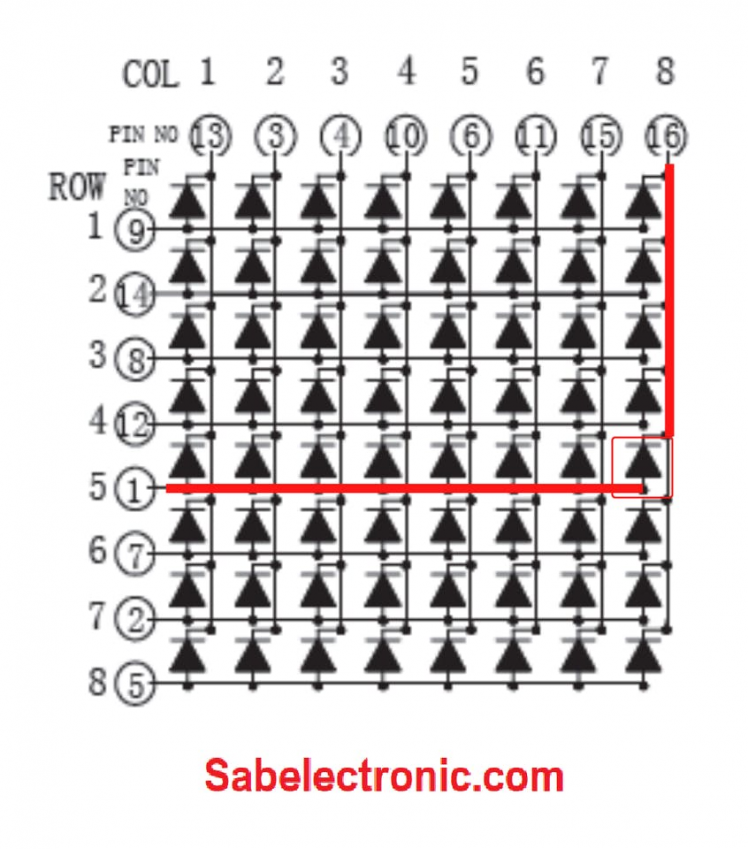 As shown in fig pin # 1 and pin # 16 got Energize and 8th Column and 5th-row led become ON. We should verify the Dot-matrix before using it because if any led found blown we can replace it with a good one. 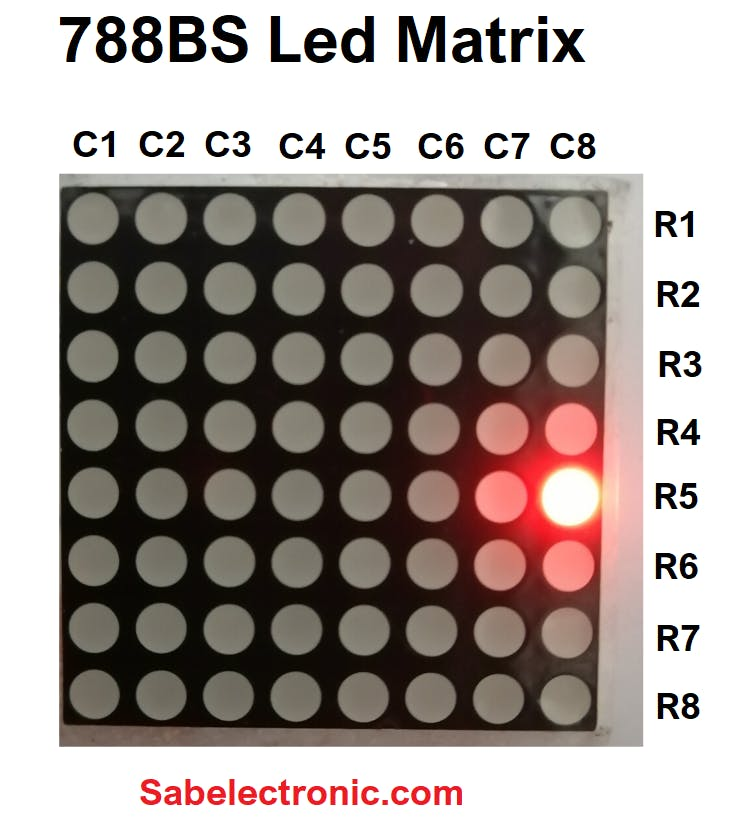 To run the 788bs, you need to check it with Arduino UNO. What material you need to perform a complete test.

We often use the dot matrix display with the shift register 74HC595 led driver or max7219. most common in electronic Circuits, we operate it with a Microcontroller or Arduino platform, and even with Raspberry Pi. But in this circuit, you can test the matrix direct with an Arduino UNO board.

First setting up the matrix circuit, as per the connection given in the picture diagram. start the Arduino IDE to program the Arduino UNO board. Arduino IDE is available at Arduino official site. For this circuit, it does not need resistance at all. Just connect wires as per the instruction.

Here you need two steps before starting a matrix connection with Arduino as per the 788bs datasheet matrix pins connection given.

This will help to generate code for your matrix. Just draw anything for the matrix, copy the code, and use it in your program. You can draw different symbols, shapes, or words.

​​​​​​​First, add the 8x8 led dot matrix library in Arduino Ide. hereafter, the library manager in Arduino Ide will run the code. It will display in the matrix.

The connection between Led matrix and Arduino UNO

To display as you like, I display a moving a Person.